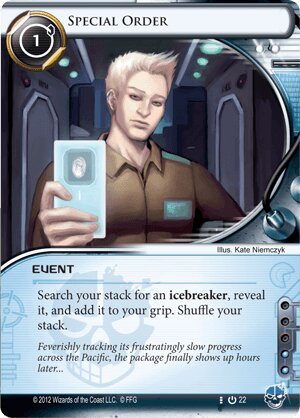 Search your stack for an icebreaker, reveal it, and add it to your grip. Shuffle your stack.

Feverishly tracking its frustratingly slow progress across the Pacific, the package finally shows up hours later…
Illustrated by Kate Niemczyk
Decklists with this card

(All That Remains era)
EfficiencyCommittee 201
3

Special Order is especially useful in a deck that relies on "temporary" breakers (e.g. Faerie). While recursion should of course be a priority in a deck loaded with these, the ability to search up a replacement in a pinch can function as a very useful backup to a standard recursion suite.

Special Order also functions as a "toolbox" card, allowing the Runner to use a number of one-of Icebreakers that each have a limited niche, but are exceedingly effective WITHIN that niche. Then when they draw Special Order, they can fetch one that happens to be applicable to the current game. This is probably the best way to use oddball icebreakers like Gingerbread, allowing the assembly of a rig tailor-made to efficiently run against the servers presented in the current game at the cost of some time and credits (as well as the hidden cost of sometimes drawing icebreakers that are currently useless).

Sharpshooter and Deus X deserve special mention here, as they are both temporary AND highly situational. Thus having a single copy of each along with Special Order to fetch them can allow a Runner to gain surprise accesses when it's most important. At only one influence each, slipping a one-of into a Criminal deck running SO can offer a nasty surprise to many corps at low cost (especially in the case of Deus X, which doubles as net damage protection and is thus useful in more matchups)

One thing that should unfortunately be noted is that D4v1d is NOT an Icebreaker and thus cannot be fished up with this card. Given the number of nasty ICE that D4v1d is specifically a potent silver bullet against, this is a pretty hefty strike against Special Order in any Anarch deck.

One question you should ask yourself before running Special Order, however, is "why am I not using Self-modifying Code?". The answer will often be influence (SMC is 3 while SO is only 2, and they are different factions so a Criminal deck will of course prefer SO even more), but other possibilities include MU tightness, a desire to specifically have the icebreaker in hand, and stuff that interacts favourably with Events. Note that the one credit saving is NOT a good reason to take this over SMC, because SMC takes one less click to install your program which can simply be spent for a credit if desired.

Overall, Special Order is a tool for reducing the jankiness of fringe icebreakers as well as a general safeguard against getting randomly screwed out of a complete rig. However, due to SMC it is probably best played in-faction or as a one-of to make use of the last two influence in some specific Anarch builds.