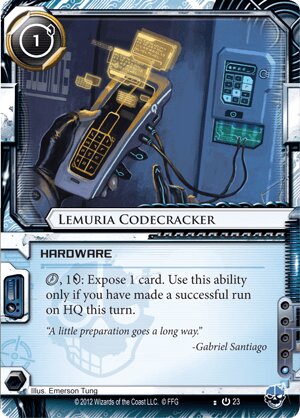 click, 1credit: Expose 1 card. Use this ability only if you have made a successful run on HQ this turn.

(Core Set newbie here, so take with pinch of salt)

This is one of those cards that seems essential when you start playing, because why would you ever do something dumb like run into a server without knowing what's there? Then as time goes by you realise how much this approach is slowing you down and costing you.

What I ended up learning from this card was that rather than spending many clicks to check if a server is dangerous, you could spend fewer clicks checking and getting through it.

(The Liberated Mind era)
Tirranek 605
Pretty much yes. Also, you can compare this card with infiltration. Infiltration gives you the info right away. Was that card installed behind 2 ice worth your inside job? For beginners (criminals or otherwise) infiltration does the job quicker. For sure you only have up to 3 times but you don need the additional clic and credit to install this hardware. Nor the successful run to HQ. — valerian32 1 Jun 2016
Its cases like these that you'd want huntclub BBS from the original netrunner game. Its a 1 credit event that exposes up to three cards, including ice. — Siaphes 1 Jun 2016
Tirranek : after more plays, you will find that expose effects are rarely needed and played. Runners grow antennas to detect traps (not that they never bite anymore) and it's better to play, say Faerie, than exposing unrezzed ices. The only expose card that deserve some interest is Drive By. — Lupus Yonderboi 2 Jun 2016
You're not at all wrong, good review! However, there are still some Jinteki decks that make you want exposure effects, since they hard counter traps and Mushin plays. I used to think it was only for beginners, but get killed a few times from Ronin and then consider this (but just play Drive By since it is excellent). — Steamwood 2 Jun 2016
7

Above all, it's very hard to find a deck place for this card. If you want to put this in your deck, then you don't want to add any more expose cards like Infiltration or Satellite Uplink. And the problem is, that putting 2 or 3 copies of Lemuria seems like a overkill. You could just add 2 or 3 copies of Infiltration instead! So you'll end up adding 1 copy of this in your deck. And this means most of the time you can't find this when you need expose. What the... And I think I don't even have to mention about those successful HQ run condition, 1 credit+click to expose...

Ahh, such an abject card.... But let's find out some Pros.

-Corp can't bait you without huge HQ defend. Maybe the cheapest HQ pressure against some corps.

-Defend your cheap programs from being Power Shutdowned!...if necessary.

-Feedback Filter+Lemuria Codecracker will guarantee you 99% win rate against Jinteki: Personal Evolution. Nice. and both cards are at 1 influence.

-Even without particular synergy with this card, the Super-Big rig deck should consider putting this card in their deck. Definitely, Aggressive Secretary hurts you quite seriously... And you don't want to hold cards like Infiltration in your hand while building up your big rig.

The click cost gives away the "intended" use of this card: to replace a facecheck run. Codecracker lets you expose the outermost piece of unrezzed ICE on a server instead of slamming headfirst into it, which can be a godsend against a number of Jinteki builds and is often a good saving (facechecking ICE will often cost more than a click and a credit unless you can break through and make use of the run right away). And it's not just ICE that this saves you from facechecking, either: No need to bash your skull against that Cerebral Overwriter any more!

Of course, it's not that simple. You have to successfully hit HQ, so it's not useful against ICE on HQ. Plus, after the turn you first use it the corp will know this and can place their nasty stuff on HQ to force you to run through it or start dealing with uncertainty again. Coupled with the fact that facechecking ICE DOES often lead to an access and Codecracker can't replicate that, and that facechecking ETR ICE just costs the click, the card is pretty situational. At 1 influence it's worth importing it if you think you'll need it to offset some nasty surprises, but a depressingly significant amount of the time it doesn't do anything smart play couldn't. And learning smart play doesn't cost you clicks and creds.

Nevertheless, for a deck that otherwise has no real interest in running HQ it encourages the corp to commit a few more resources there, which can make it a worthwhile include. Similar to the corp strategy of running a Paper Wall or two as your only Barrier to force the Runner to dig up an appropriate breaker that then sits around being useless. This amusingly makes it more useful OUTSIDE of Criminal, since a number of Criminal tools (e.g. Account Siphon) incentivize HQ runs already. Might be nice in Medium decks to either expose R&D ICE or get some of it played on HQ instead...although the real strength is probably in forcing the corp to make difficult decisions regarding remotes. Do they put less defense on the remote (making it easier for you to get in), or let you see what's in it before running?