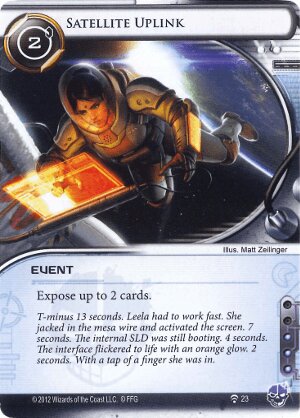 Expose up to 2 cards.

T-minus 13 seconds. Leela had to work fast. She jacked in the mesa wire and activated the screen. 7 seconds. The internal SLD was still booting. 4 seconds. The interface flickered to life with an orange glow. 2 seconds. With a tap of a finger she was in.
Illustrated by Matt Zeilinger
Decklists with this card

Expose is still an underrated and underused (design wise) ability. It has been said in a few podcasts and articles that many high level players are starting to include just a single Infiltration in their decks - a single expose can make the difference late game from running on a server when it isn’t needed, saving the money and not opening up a scoring window for the corp next turn. Satellite Uplink could conceivably help in that - if there was ever a need to expose two cards.

Early game it can help against the ICE that has yet to be rezzed, later game it can help if there are multiple upgrades in a server that need to be dealt with, such as with Drive By - a Satellite Uplink first can make sure the Drive By hits the right card to make the run on the final click successful - but that is very combo heavy and click intensive.

Blackguard is a natural combo with Satellite Uplink however, and if there was some way to reliably run a Blackguard deck without the huge temp hit that the eleven cost console generates to install it, it would be a powerful economic warfare card. Yet, like most expose cards, until that mechanic becomes more needed or “powerful” (in general met a terms), Satellite Uplink is not likely to be very impactful.