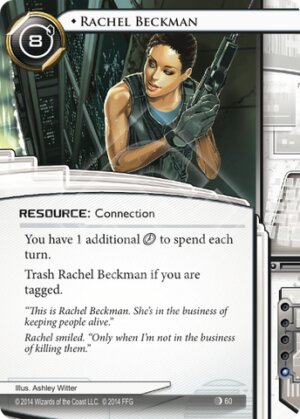 If you are tagged, trash this resource.

Why would I avoid to fall in love with a woman like Rachel Beckman ? Because she costs me a lot of money and she's prone to leave me without telling !

Why would I write a stupid sexist rant on NRDB while half drunk ? BECAUSE OF YOU, RACHEL, BECAUSE OF YOU ! Sure, you gave me awesome time we spent together, but let me at the reach of a Hard-Hitting News and flew away without looking back as soon the havoc struck me.

Kati is so much more faithful than you. Soon I'll meet Beth, and while I know she won't stay forever, hopefully she won't let me broke. Heck, I'd rather let this cat-eyed chick suck my brain out even though she'd spend only 2/3 times as much as you. Plus, I'd get a chance to forget you if her drug hit the right neurons. (That said, I won't let Akshara replace you. She's the best intentioned woman I know, but her naïveté makes her as unreliable as you, while in a very different way).

And I won't cry anymore, Rachel, I WON'T CRY ANYMORE !