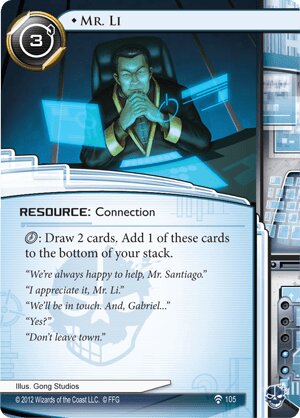 click: Draw 2 cards. When you do, add 1 of those cards to the bottom of your stack.

"We're always happy to help, Mr. Santiago."
"I appreciate it, Mr. Li."
"We'll be in touch. And, Gabriel…"
"Yes?"
"Don't leave town."
Illustrated by Gong Studios
Decklists with this card

Mr Li is a tutor of nothing in particular. Unlike Diesel, it doesn't offer any kind of card advantage, it still gives you one card for one click, it's simply a better card for the situation you are in because it effectively cuts your deck size in half and let's you actively chose not to draw the wrong card.

Mr Li is for decks that want different kinds of cards at different points in the game. Early on it filters out unnecessary Mem Chips and expensive R&D Interfaces and gives you Inside Jobs and Faeries, late in the game it gives you the cards you need to control the game. It won't get you, specifically a Legwork, but you'll be much more likely to get something to pressure the Corp when you need and those singletons become much more worthwhile than they would normally be.

For decks that can work with any combination of cards, like those based around AIs or Parasite recursion cards like Earthrise Hotel or Quality Time are better. But Mr Li is a great choice for many Criminal decks, specially the most controllish builds which can afford the luxury of a slow, expensive card that does nothing on its own.

Mr. Li is an old fav who has survived rotation! Yay. All in all I find him to be a strong addition to most Criminal Decks to enhance draw - effectively draw 2 cards and pick the one you like best, then pop the other to the bottom. This syncs incredibly well with Window for one of my favourite draw set-ups - If the 2nd card was a good one, use your next click to grab that from the bottom of the deck where you just put it. If it's no use, use Li again for another draw and so on. The pair in tandem allow much more consistent draw. Yes, it's still 1-card, 1-click, with it removes a fair amount of uncertainty from that 2nd click. I've spliced the Li/Window combo into a number of Anarch decks as well with great success, though a tad expensive on the influence front.