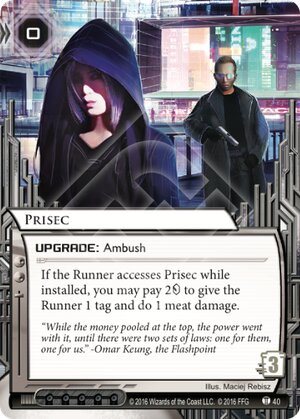 If the Runner accesses Prisec while installed, you may pay 2credit to give the Runner 1 tag and do 1 meat damage.

"While the money pooled at the top, the power went with it, until there were two sets of laws: one for them, one for us" -Omar Keung, the Flashpoint
Illustrated by Maciej Rebisz
Decklists with this card

Great synergy for anyone looking to squash the runner, or make them think you are. Seriously too good in multiples, Id wager some credits this card will be appended to "Limit one per server" eventually. Weyland decks will have wet dreams of throwing all three of these into their scoring remote while holding a mix of scorches and punitive counterstrikes. NBN and Jinteki can have plenty of fun with these as well, though. Make the unfortunate encounter with Snare that much worse.

(Blood Money era)
An0n3 27
after accessing Prisec when it's facedown, It fires me. But after that it remain facedown or go faceup? — dagonlb 17 Sep 2016
Facedown. In order to become face up, an asset or upgrade must be voluntary rezzed by Corp in an appropriate time, paying its Rez cost. — tilindir 22 Sep 2016
6

This card is insane, let's get down to it.

From the corp's perspective, you have to spend a click to install Prisec, then 2 when the runner accesses it. By contrast the runner spends 3 creds to trash it, then 2 creds and 1 click (usually) to remove the tag. So seen purely as econ you are looking at a 3 cred swing in your favor. Above and beyond the cred/click changeover you do a meat damage. They probably aren't running with an empty hand, but 1 card might hit something good.

Prisec's tag, however, isn't really about economy. It is about click compression. The runner normally sees a run as a one-and-done kind of deal. Now the run isn't 'really' over until they have removed their tag. If they run last click they'll be ending the turn tagged. Still not so bad, but you can see where this goes.

Prisec is an upgrade, and not unique. There can be 2 prisecs in a server, or three. It can live in central servers, or remotes. It can live with Snare! or an advanceable upgrade. You can come out of a run with 2 or more tags, and a mauled hand. Even just running into an Argus Security: Protection Guaranteed agenda with a Prisec is a significant hit.

The brief tagged state is useful for Harishchandra Ent.: Where You're the Star , letting them see the runner's hand. SYNC: Everything, Everywhere makes the tag either more difficult to get rid of or more useful for the corp.

Further, Prisec doesn't just give you a tag. It causes you to end a run tagged. Dedicated Response Team anyone? Run into a server with a Prisec and they rez a DRT in the Jackson window and you've just sucked up 3 meat damage and a tag.

And, heck, the paid response window after they hit the Prisec is as good of a time as any to rez a Zealous Judge . Yet more click compression! Now the runner has to remove the Prisec tag, then run the ZJ and trash him. Hope he wasn't behind a Data Raven.

If you are playing a deck that goes for flatline and doesn't try to keep the runner out then slot 3 of these. You won't regret it.

(Blood Money era)
Waltzard 386
By *paid response window after they hit the Prisec,* do you mean the response window after 1.5 in the runner turn structure? After window 4.3 in the run structure (the Jackson window), there aren't any more paid ability windows during the run. There is one right after any action is completed, including making a run. — FarCryFromHuman 29 Aug 2016
Yeah, after the run. Rez the ZJ after the run, before they can click to remove tag. — Waltzard 29 Aug 2016
I really feel these should cost a pip each. — quailman2101 29 Aug 2016
For enhanced, prolonged tax for running the server, use Oaktown Grid. — H0tl1ne 29 Aug 2016
Also, potential protection for Political Assets. — Thaddux 31 Aug 2016
a noob question about it, when I access to server and prisec is facedown and the corp doesn't rez it, I access it after that, this upgrade hits me or must be rez? — dagonlb 17 Sep 2016
It hits you upon access, no matter rezzed or unrezzed. — tilindir 22 Sep 2016
4

Sir, I'm going to have to ask you to get in the car.

Prisec is a neutral ambush most likely to be compared to that of Snare! or News Team. It costs a mere 2 to fire, compared to the former's 4, while having half the payout, with only 1 damage rather than 3. Now you might say: "Thats not very good. 1 damage is practically a negligible amount". And you would b right about that. However, the beuty of this wonderful card lie with two aspects. It is an Upgrade, and it has three to trash costs. This is HUGE compared to Snare!, which usually was a 1 and done deal. They run, it fires, it goes to the bin. Also, Prisec STACKS so you could potentially have 3 on an essential, taxing server, kind of like an expensive Hokusai Grid. Provided the runner delines to or cannot trash Prisec, this can become a major deterrant. Prisec works wonders with Argus Security: Protection Guaranteed along with Snare!, to do huge amounts of damage with only a moderate amount of investment. One of my favorite plays is to put 2 or more Prisecs on a server, along with a Casting Called Oaktown Renovation or Underway Renovation. This basically tells the runner, "If you run here. You WILL be tagged". Provided the runner doesnt get too gutsy, you can Click up the Oaktown to 10, 20, or 30+ advancements, netting you hundreds (Maybe) of credits. Overall, I think Prisec will find a way into almost every damage build, be it Jinteki: Personal Evolution, Industrial Genomics: Growing Solutions(Oh God no), or Argus. It even might have a home in SYNC: Everything, Everywhere! In short, this is my new favorite Ambush.

Now excuse me, I have some runners to flatline.

(Blood Money era)
Handsome Jack 1602
I can see this being fun for rich corps. Use Localized Product Line to get them all then install them all in your scoring server, perhaps behind a Data Raven. The runner is going to have a tough time with that scenario. — quailman2101 16 Aug 2016
If you're a Jinteki corp, then this is only better than Hokusai Grid if one of (a) you're stacking with a region (b) you're stacking with more copies of PriSec or (c) you're making use of the tag. Otherwise Hokusai Grid only charges you the two credits once and costs one more for the runner to trash. — LeonardQuirm 18 Aug 2016
A big difference with snare is that prisec fires if accessed WHILE INSTALLED. — Him 19 Aug 2016
I think the major points are non-unique and not an asset. If you can do something to increase the trash cost like IG then it becomes very hard to get rid of this. I'm just wondering at what point it becomes more in the runner's favor to build decks that decline to access and throw everything into archives. — killj0y 14 Oct 2016
2

You know that one deck that uses Surat City Grid and Brain-Taping Warehouse to rez a bunch of bioroids for almost nothing? You know what the one problem with that deck is? The only good upgrades cost about 2 and are almost always unique. What that deck really needed is some sort of 0 cost non-unique upgrade that has a good ability. Prisec is a strong card and will probably see play in most tag-n-bag or super modernism decks. It gives the runner a tag which will (most likely) force them to spend a click and 2 creds to clear it. And even if they do clear the tag the corp still gets to take a card from the runner.

Edit: After looking around a bit I've found that this card can also combo with Harishchandra Ent.: Where You're the Star to trash any card of the corps choosing from the runner's hand.

ReEdit: No it does not.

(Blood Money era)
bbnumber2 3
How, exactly? Damage is randomized - you don't get to choose, even if the grip is revealed. — LynxMegaCorp 2 Sep 2016
Maybe with Salem's Hospitality next turn? — quailman2101 2 Sep 2016
Sure, but that's true for any tagging method. — LynxMegaCorp 2 Sep 2016
I think that he things with Harishchandra you get to pick the card that gets removed via damage, as though it were Chronos Protocol.. — Tungsten 2 Sep 2016
We've cleared that up. Its because the Corp tends to pick the card for damage - but that's just for the sake of randomness. If the Runner's grip was revealed, you'd still conceal them for damage purposes. — LynxMegaCorp 3 Sep 2016