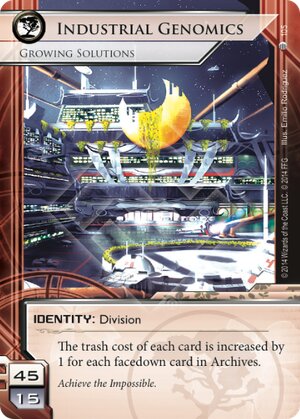 The trash cost of each card is increased by 1 for each facedown card in Archives.

Achieve the Impossible.
Illustrated by Emilio Rodriguez
Decklists with this card

Industrial Genomics is quickly growing on me as an ID, mostly thanks to Order & Chaos. Cards like Space Camp and Cyberdex Virus Suite are excellent to toss into the Archives. If you use the former in an IG deck, you might consider having advanceable ICE in your deck (to ensure that any time the runner does decide to poke his/her ugly head into Archives, you've got some way to benefit). Since Jinteki does not natively have many advanceable ICE at all, I typically include a cheap import from Weyland like Ice Wall.

The identity enables plenty of in-faction assets, ranging from Sundew to Shock! to Shi.Kyū to Ronin. One might consider splashing particularly penalizing assets like City Surveillance or Dedicated Response Team, but that's quite a lot of influence. Jackson Howard is always useful in this ID to overflow your hand and force-discard things like Space Camp and Shock! and Shi.Kyū into Archives.

The Runner has a couple hate cards accessible now, such as Archives Interface, which is rarely run in my meta at the time of this post. Hades Shard is far more common and might actually flatline a player running on IG's archives. Whizzard: Master Gamer and Scrubber are also a tad hateful toward IG due to innate recurring trash credits; they both will ruin an IG deck with high value assets (as described in the previous paragraph).

(Order and Chaos era)
pbrand 268
Good review. Id just like to point out that Imp is a major hate card the runners have for a IG player to look out for. — Pinkwarrior 30 Mar 2015
Also Eater hurts this ID a lot. They will flip Archives but never access your traps. — DarkeningLight 3 Apr 2015
Wanted to add: News Team is absolutely wonderful and triggers from the archives now. The problem I've had is that IG decks don't really have space (or influence) for tag punishment, but I think it's worth including one News Team in an IG deck to surprise the runner and make them waste 2 clicks and 4 credits scrubbing the fallout. Killing Kati Jones or London Library (common in my meta) is nice too. — pbrand 28 Aug 2015
I'm not sure that Eater actually flips cards in Archives up: "The Runner turns all cards faceup when accessing them" - without access, they are not turned faceup, at least as I read the rules. — fetish 5 Mar 2016
http://ancur.wikia.com/wiki/Accessing_Archives_with_Eater_Ruling — GameOfDroids 16 Mar 2016