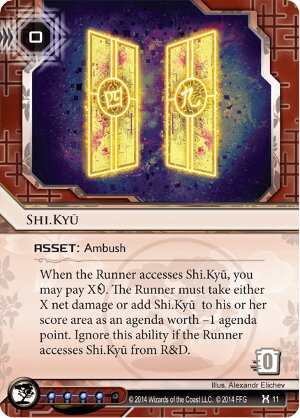 When the Runner accesses this asset anywhere except in R&D, you may pay Xcredit. The Runner must either suffer X net damage or add this asset to their score area as an agenda worth -1 agenda point.

Japanese for Four.Nine; in Japan these are unlucky numbers as they sound like Death.Suffering, which incidentally is the options this card presents to a runner.

(Up and Over era)
Ber 2615
What if this card is accessed from Archives? Does it trigger then? Does it trigger every time the runner hits archives? — Hiro Protagonist 1 May 2018
Yes, it triggers if the Runner accesses it in Archives. Compare it to Snare! which specifically states to "ignore this effect if the runner accesses Snare! from Archives". In terms of Archives protection though, Shi.Kyu is not that great as a runner can choose to remove it by taking the -1 AP. In almost every situation, you probably want Breached Dome for Archives protection. — BlackCherries 1 May 2018

I have an Aginfusion deck that uses Port Anson Grid, Shi kyu, breached dome, and shock to repeatedly dump a runner into a incresingly deadly archives. Takes a second to set up, one once you do, they usually are forced to trash a program each run rather than take a minus one point and possibly die from a bunch of net and meat damage.