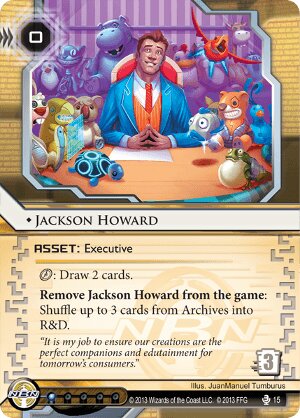 Remove Jackson Howard from the game: Shuffle up to 3 cards from Archives into R&D.

"It is my job to ensure our creations are the perfect companions and edutainment for tomorrow's consumers."
Illustrated by JuanManuel Tumburus
Decklists with this card

Known as JH, Jesus Howard, or the Corporation's Savior.

Our Jackson, who art in my deck
Howard be thy name.
Thy install come,
Thy drawing be done,
In all decks, as it is in NBN.
Give us this day our daily cred,
And forgive us our trashed agendas,
As we also have forgiven Whizzard for trashing you.
And lead us not into agenda flood,
But deliver us from R&D lock.
For thine is the deck,
And the OP,
And the glory,
For ever and ever.
gg.

(Order and Chaos era)
Ber 2615
Personally I'll be glad when JHow rotates out - he's in almost every corp deck as a 3 of auto-include and he displaces other cards that do similar things because he's just far better than competing cards. I think he would've been better limited to one per deck. — DGB123 1 Oct 2016
16

Well well if it isn't Jackson Howard, a man with an impressive collection of nicknames containing but not limited to JH, J-How, Jackie H, Jackson Fucking Howard, Jolly Horror, Jesus How Odd, Jackass Coward, Jelly Hooker, Jackoff Cockwad, Man in Blue Suit, This Should Read 12 Influence Not 15, Mr Instaslot, Training Wheels Dude, Toy Boy, These Are Not The Agendas You Are Looking For, Insurance Fraud, What A Guy and so on and so on.

Since we are soon to part ways with this there charming fellow, I'd like to take a while and explain who Mr Howard was and what exactly was he about. Enjoy.

Jackson Howard is an NBN executive and his official title is Vice President of Infant Programming. He used to be a regular code monkey and a hardware engineer working for NBN - that is, until he came up with Rexie*, an interactive, educational toy designed for children aged two to six. Rexie was equipped with an optical brain - of the likes you see everyday in Haas-Bioroid's main products. An idea this wild (due to enormous costs and possibly a patent violation or eight) either gets you fired (and that is what almost happened) or very, very much promoted (this is what actually happened).

What does a child's toy need an optical brain for? Gathering information, mostly. Howard's Rexie was able to record, store and analyze every single quirk in a kid's upbringing, effectively getting to know his owner better than their parents do.

What does NBN need all this data for? Customer profiling. Ergo - selling more junk. Is that it?

Were it only that simple - Rexie was an interactive toy. An artificial, semi-intelligent being able to interact with kids just as they interact with it. Which, naturally, opens the possibilities to influence little minds and subtly sculpt them towards more desirable reactions. Now you're not only selling more junk - you're also making your customers-to-be even more gullible so that they spend more on your wares in the future.

Coming up with such an idea has made J-How a kind of a rising star in NBN ranks. For instance, he's got his own department right off the bat. Mechanically, consulting JH about his ideas is the first ability printed on the card. Having such a mind in your R&D department - sharp, revolutionary and devoid of any sense of good or wrong - essentially doubles the rate at which your eggheads spit out new projects.

The second one is more interesting, partly because I have no idea how to justify it in a way that would stick. There is no clear way to explain cards that get you your archives back - either it's a fridge full of brains, a keg full of something sticky, possibly brains, or, adding a curious twist on a visible pattern, something painfully brainless. Subliminal Messaging gives us a possible, yet imprecise, hint - maybe an ability to magically vanish cards from Archives is somehow linked to JH's accomplishments in the field of psychology? Perhaps he's using his infant profiling to predict which of the old ideas would be the most lucrative to dust off when the new generation matures? Maybe when an agenda disappears right in front of your eyes it's because you were programmed - from the day you were born! - to not see it? I find it strangely easy to believe.

Hey, what if I told you that, since you picked up Netrunner, you too were programmed? Can you give me a number on how many decks you've made contained this card? Tell me, what are you going to do when he finally rotates, apart from being utterly helpless? If that was an intended practical metagame joke, then we really have to give FFG some credit for planning ahead.

Following the pattern of well-known characters getting cards that explain the way their adventures came to an end (so far, Andromeda, Chaos Theory and Whizzard), I've been wondering if there will be one describing JH. Then I thought that, maybe, there already was one. Would serve him right - to get the taste of his own medicine and get imprinted with harmful memes by some smooth talking coach wannabe, and then lose it all in an investment gone tragically wrong.

.* - it's pretty much possible that CT's trademark console is actually Rexie itself, only rigged to work as a cyberdeck (because an optical brain is absolutely bananas in terms of computing power). You can even see it on the art if you look closely!

The executive that no Corp can live without. Free to rez, gives 2 cards per click, has a fairly steep trash-to-rez ratio, is one influence and can bring cards back from the dead. Almost every corporation deck can benefit from this card, even just to bring back trashed operations. This card is like Wyldside and Déjà Vu for the cost of free.

Never give a Gorman Drip v1 a single token. Save up a couple influence points as a Corp for Mr. Howard, you won't regret it.