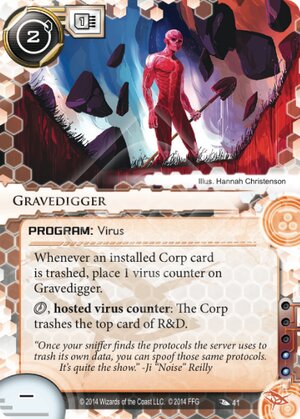 Whenever an installed Corp card is trashed, place 1 virus counter on Gravedigger.

"Once your sniffer finds the protocols the server uses to trash its own data, you can spoof those same protocols. It's quite the show." -Ji "Noise" Reilly
Illustrated by Hannah Christenson
Decklists with this card

Gravedigger - digging the Corp's grave since 2015!

This is an amazing card. I honestly didn't feel how powerful it was until a game last night. Obviously a Noise: Hacker Extraordinaire deck (preferably with Hivemind ) in it is one of the perfect places currently for 1 of this bad boy.

So generally, you would think "Okey - milling 1 card from install, possible to mill 1-2 more cards, but wouldn't really use Hivemind counters for it ... also when the Corp purges, you can't Virus Breeding Ground to it"

During the game last night, I was neither getting my Djinn, nor Hivemind and I had milled max 5 cards with my ID.

That way I single-handed milled the corp for 3 turns and then Hades Shard on my last click of the 3rd turn and won the game. I was not simply milling 1 card per turn, but 2 at least. 2 clicks -> move 2 counters from VBG and then 2 to mill ( leaving the 1 counter on Gravedigger so I can repeat next turn). The last turn I used up all counters and milled 3 and Hades Shard for the win.

Also if you play Parasite in your Hivemind deck like I do, Gravedigger would be getting a lot more counters than normal, thanks to melting those ICE ;)

I might surprise you with my final score for this card, but I grade digger 4 out of 5 for any virus deck and a solid 5 out of 5 for a Noise Hivemind deck.

At first I did not think I would enjoy Gravedigger as much as I do now. It sits as a 1-of in my Noise: Hacker Extraordinaire deck, along with its trusty Paul Bearer Virus Breeding Ground. But when you're solitaire-ing out a few turns or just stalling to sweat out the corp, the mill can be frustrating. In a recent tournament, I would Wyldside up, play out a virus, click a token from Virus Breeding Ground on to Grave-y-boy, and mill a card. I ended up starving corps because they now had to dig for answers while I stuffed everything in the yard. Definitely not a card to rely on, but still strong when planning to mess with the corp's plans.

This card has an obvious synergy with Noise: Hacker Extraordinaire as already mentioned. If anything in a Noise deck it serves as a 2 virus that aligns directly with your current game plan.

Where this card really becomes interesting however is in a cutlery deck (Knifed, Forked, Spooned) and perhaps with Parasite. The high trash rate of corps cards should quickly build up counters allowing you to further deny them of that truly essential ice. In this situation if Eater is used it's possible to install 1 Eater and 3 Harbringer for 3 virus tokens per ice trashed without having to increase your memory at all. All that's left is for you to find enough clicks to use them all!

It is also worth noting that cards such as Hivemind, Incubator and Virus Breeding Ground all provide Noise (specifically) with ways of creating a deadly amount of card milling when combined with Harbringer.

Pretty disappointed with the 'installed' clause here. I would have instead liked it to trigger only when you trash a Corp card, meaning the Runner. this would disallow the overpowered synergy with Noise: Hacker Extraordinaire, but still work with things like Imp and Demolition Run. As it stands, I think it's a bit too situational to see play. Whizzard likes it early, but beyond that, who?

(The Source era)
moistloaf 171
@moistloaf - I am assuming that this also works if a corp trashes an installed corp card too, though. For example, obseolete ice, unrezzed ice with a femme counter, failed traps in remotes, etc. IG does this all the time, and NEH can if you let them abuse architect. So, it may be better than it first appears. — pruneface 17 Jan 2015
I look at getting a virus token for the corp trashing a card as a bonus instead of a prequisite. I plan on getting most of the tokens from Incubators, Hive Minds and Virus Breeding Grounds. — raziel1013 12 Feb 2015
Does not work with demorun. — Syntax 27 Mar 2015
Keyhole with Gravedigger would be ridiculously good if that was the wording. But with the current wording it also trashes off of Adonis/Eve/Launch Campaign trashes, and any corp trash effects, including several SysOps. Almost a weaker version of Hacktivist meeting without the ice destruction game plan. — Delrian 9 Mar 2016