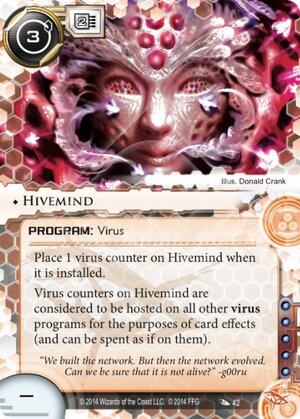 Place 1 virus counter on Hivemind when it is installed.

Virus counters on Hivemind are considered to be hosted on all other virus programs for the purposes of card effects (and can be spent as if on them).

"We built the network. But then the network evolved. Can we be sure that it is not alive?" -g00ru
Illustrated by Donald Crank
Decklists with this card

This is an extremely powerful card, but one that doesn't really do much on its own.

To exploit Hivemind's ability, you should use those viruses that won't consume the virus counters on it. The following is a list of those that will benefit the most from this card's presence:

Now, Hivemind comes with one virus counter on it, free of charge, but you need a way to keep at least that single one on it, because this card does not offer a way to gain more of them. You just need a Progenitor to host it, and it will be somewhat safe from a purge.

You also should make use of Incubators and Virus Breeding Ground. The latter will work just fine, since there will always be at least 1 virus counter on your Hivemind hosted on the Progenitor.

Incubator, on the other hand, is your main source of virus counters, and once you have a few, you'll be able to do insane stuff. Let's say you have 5 virus counters on Incubator: you trash it to move all of them on Hivemind, which now will have 6. Suddenly, your Medium (which was void of any counters) is worth 6 extra cards from R&D (keep in mind you'll add another virus counter before accessing). Your Parasites will kill any piece of ice with strength 6 or lower on install.

If that's not enough, keep in mind that all the virus counters on Hivemind will are considered hosted on all other virus programs. Why is that important? Well, just imagine installing another Medium... voilà: accessing to 12 extra cards from R&D. How about that?

Not enough to satisfy your need for wanton destruction?

Well then, why don't you make a Demolition Run instead.

Of course, you could always use the counters on Hivemind with other viruses, that will consume them... like Gravedigger, for example. Yes, this Hivemind will let you do some crazy stuff, just take a look at this awesome deck: Can o' Whupass... even if just for the description!

(Order and Chaos era)
paddosan 3370
"If that's not enough, keep in mind that all the virus counters on Hivemind will are considered hosted on all other virus programs. Why is that important? Well, just imagine installing another Medium... voilà: accessing to 12 extra cards from R&D. How about that?" — WayneMcPain 22 Mar 2015
You would still only be able to access 6 extra cards with Medium in this scenario, because you still have to spend the virus counters on Hivemind. — WayneMcPain 22 Mar 2015
Haha nvm, I'm an idiot. You don't spend virus counters with Medium. Sorry! — WayneMcPain 22 Mar 2015
Here's a question that I just though of: how does Hivemind interact with Incubator? Incubator doesn't spend tokens for its effect... but you wouldn't get to duplicate all your tokens on Hivemind by using Incubator's ability... confusing. — FarCryFromHuman 23 Mar 2015
I don't think it duplicates them, because the counters aren't actually there. You use them for counting effects or can spend from Hivemind, but if you are moving them elsewhere it takes the literal ones on the card (by the way it is worded). — The_Tim 11 Jul 2015
Hmmm... does that mean that when you trash Incubator you also are moving all the counters on Hivemind back onto itself? What if there are multiple Hiveminds? Do the rest get drained and moved as well? — Zakalwe 21 May 2016
@Zakalwe No multiple Hiveminds. The card is unique — Ereshkigal 24 Jul 2017