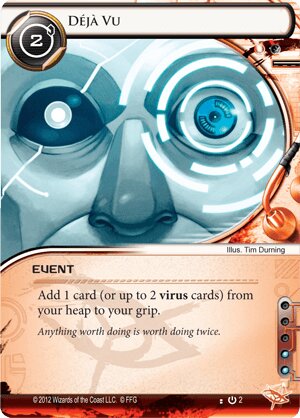 Add 1 card (or up to 2 virus cards) from your heap to your grip.

Anything worth doing is worth doing twice.
Illustrated by Tim Durning
Decklists with this card

This is a card that has seen lot’s of use, but may not be realized for the impact it had. Everyone knows the pain of Account Siphon - there were some Noise decks in the early days that would make use of Account Siphon and Deja Vu for long suffering returns of the dreaded Siphon. Deja Vu found its way into Criminal decks for the same reason at the time, for much lower influence cost.

Clearly meant to aid in the use of the Virus theme that dominated Core Set Anarch, it never-less is good for many other uses - it’s ability to bring back any card from your Heap with no restrictions makes it powerful in recursion. Recursion is a heavy theme of Shaper, but until Creation and Control, Deja Vu was one of the primary methods of using those cards over and over again, even outside its designed intention of Virus type cards. Unfortunately its 2 credit cost and its generally only 1 card return make it a slightly more expensive card than most other options, in addition to needing an actual click to play it - unlike Clone Chip.

MaxX: Maximum Punk Rock has made this card even more useful in the current day, given her ability puts so many cards into her Heap. Like with Exile: Streethawk, using the Heap as an additional space to store cards to play requires cards that can cause recursion. Add to that the new proliferation of Virus cards with Order and Chaos, there is more use for Deja Vu than ever before.

(Written during the meta of The Valley release of the SanSan Cycle. To see more like it, visit wyldside.blogspot.com )