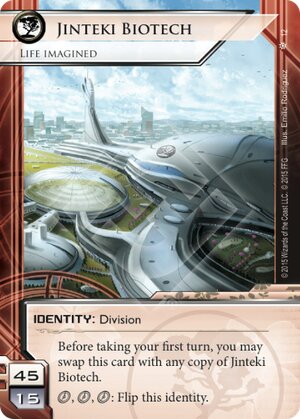 Before taking your first turn, you may switch this identity with any copy of Jinteki Biotech.

The Brewery: When you flip this identity, do 2 net damage.

The Tank: When you flip this identity, shuffle all cards in Archives into R&D.

The Greenhouse: When you flip this identity, place 4 advancement counters on 1 installed card that you can advance.

So lets get the review started.

Jeeves Model Bioroids. Jeeves allows you to score an unadvanced 5/3, do 2 net damage + Punitive Counterstrike, or reshuffle Archives into R&D AND do something else.

Before you flip, the runner has to have at least 2 cards in hand at the end of a turn or they'll die. This means that if they run on a double advanced Project Junebug they have to draw 2 cards in order to be safe. You can complement this with Punitive Counterstrike and other cards, like if they hit a Snare! and slow the runner down.

This takes most people by surprise. If you have clones are not people in play, a 5/3 agenda (like Global Food Initiative ) face down and they don't check it, you get four agenda points and threaten to win the game at that point. Since you're probably playing 3 pointers, Punitive Counterstrike becomes a lot more strong at that point, since the runner is now on a timer and Punitive rewards 5/3's.

Remember at the start of the game where you had all of those operations that you played and got like 40 credits from. Did you want to do it again and have central servers that have Snare! in them, 4 ice tall central servers, and a Caprice Nisei at the bottom of the thing, and have enough money to rez all of them?

Which side to choose

The brewery (kill) is usually good reckless runners who rely a lot on early game aggression. Usually this is criminal, but there are flavors of criminal that rely more on setting up, like seige engine Armand "Geist" Walker: Tech Lord. Don't try to kill those, they're harder to kill.

The greenhouse (fast advance) usually good against runners who take FOREVER to set up, but then R&D lock you into oblivion, like Shaper in general, Armand "Geist" Walker: Tech Lord or Sunny Lebeau: Security Specialist. Set up a gear check early game, find that 5/3 + Jeeves Model Bioroids and a "Clones are not People" and just score out twice.

The tank (glacier) is good against runners who intentionally make it hard to do something/deny the corp from doing something. Asset denial, ice destruction, operation destruction, putting cards at the bottom of your deck, trashing the top card of R&D by through Data Leak Reversal, Bhagat, making you overdraw, or Fear the Masses. The tank allows you to get those critical pieces that make your deck work back into your deck and stabilize.

(Blood Money era)
debraken21 47
Also worth noting that you can score Improved Protein Source without Jeeves. Since you're playing Jinteki, you're probably not too worried about those 4 credits the Runner gains. — Obelisk 3 Oct 2016
7

I think the designers felt that the strength of Life Imagined will come from how the runner has to keep in mind all three possible identities and play around them. However, I imagine that most people will be playing it with the Greenhouse ability active because, far as I can see, that's just the strongest. Let's take a look why.

The Brewery allows you to kill the Runner if he ever ends his turn with 1 card in hand. Now, this isn't a really common scenario because very few Runners will ever go down to 1 card against Jinteki. Sure, he might have hit a Komainu or a Snare on his second last click and not have enough time to draw up, but the chances of that happening don't seem to be large enough for me to warrant putting the Brewery on the flipside.

The Tank allows you to reset the game if it's been going on for too long and you want all your cards back into R&D. I'm... not entirely sure it's absolutely necessary, especially since this is a 45/15 deck. Of course, maybe you can use this to setup some sort of crazy Power Shutdown combo-wombo play, but aside from that, the Tank's ability is similarly too rare for it to be worth your ID slot.

Now the Greenhouse, on the other hand, lets you do all sorts of things. It allows you to bring a Project Junebug protecting your Shell Corporation to a guaranteed kill range; instantly score a Nisei MK II/House of Knives/Philotic Entanglement; gain a shit-ton of cash with Thomas Haas/GRNDL Refinery; or maybe just instantly power up a Ronin/Reversed Accounts and ready it for the kill next turn. In fact, if you spring for Biotic Labor - and Biotech seems to be built for click-gain effects - you can Biotic, flip Greenhouse onto a Ronin, and instantly use the Ronin to kill any Runner with 2 cards or less in hand.

(Order and Chaos era)
postalelf 69
I still doubt this ID is tier 1 material. After all, you can only flip it once per game. Now, if you were able to choose which Biotech ID you flip to during the game (as opposed to before it starts) then it would be pretty potent (and still hardly OP). — Kroen 11 Mar 2015
Does "before your first turn" mean after starting hand and mulligans? I could see a certain kind of highly versatile deck choosing based on opening hand... — LordRandomness 29 Jan 2016
4

This card has nothing but more potential. As the card pool expands, the ID will settle into a build that offers solid options against all types of runners. Flexibility is king with this ID and being able to sniff out your opponent's build (meta calls), play the best ID for the job, and run it seems very good. Also the gambit of playing the Brewery against Noise instead of the obvious choice of the Tank. More Jinteki mind games resonate well with this one. Right now the ID hasn't been cracked yet, but I'm expecting a build to utilize all 3 cards almost equally (obviously). Director Haas maybe?

I prefer to make decks out of Jinteki Biotech that can win using either one of the two good ID's (I don't like the Tank or see it winning games consistently enough to build around it). The Brewery can win with a flatline, the Greenhouse can score out to win. Either of these abilities can be very powerful and can win the game abruptly, but if the runner knows which one the corp is using, they can anticipate it and try to counter the corp's game plan.

If the runner is kept uncertain of which ID the corp is playing towards, or is convinced that they are playing the wrong ID, then they will adjust their game to counter a move that isn't coming. To keep the runner confused, building a deck that can equally use two different IDs can pose a viable threat to 4-advance an agenda in a single uninterrupted action, or flatline the runner with 2 net damage will leave the runner uncertain of how aggressively to run, and where.

One card that I would like to highlight that I think is often overlooked in this ID is Biotic Labor. Biotic allows the corp to fast advance a Nisei MK II, which is a very powerful move. Furthermore, the corp can score a The Future Perfect as a never-advance play with a Biotic and an ID flip. On the otherside, a runner may be safe from a flatline at 2 cards, but a Biotic Neural EMP will flatline. This can be particularly useful against Faust. It is a very expensive splash, but Biotic Labor allows some very powerful moves that can win a game.

(Data and Destiny era)
bubbathegoat 597
I wouldn't write The Tank off so easily. If you find yourself getting milled alot courtesy of DLR or Noise, it can be a life saver. Being able to tech against this strategy without using a deck slot is pretty good. As you point out, you have to plan around the fact that the runner may figure out which ID you chose. If you see Valencia these days it may be better to play safe than sorry! — Pilltechre 25 Nov 2015
Also works with Jeeves, as you're spending 3 clicks on the same action. — swearyprincess 11 Jul 2016
2

If you want to use The Brewery, try using Chairman Hiro and Gyri Labyrinth, or a Psychic Field and a scored False Lead, to prevent the runner drawing back above 1 card.

This card could be very unfair to newbies who don't know what it's back face does and assume the corp can only damage them if they made a run last turn.

Ah, Jinteki Biotech : Life Imagined, the Identity that everyone knows is coming but no one knows how it will affect the meta game. Well I'm writing this review to shed some light on how the ID and its abillities work. First, this is really 3 IDs in one, however you can switch between them throughout tournament matches. This is INSANE!!!! It basically means you get the advantage of choosing your ID ability based on what gives you the best matchup vs. each individual runner.

The Brewery : This will be a very potent threat in Jinteki kill decks, 2 EMP on demand at any time is really great. I am not sure if every flip will give the affect or every other flip. If it is indeed every flip, then this ability will really pressure the runner to never end the turn with less than 3 cards in hand, which handicaps the runner a lot in my opinion.

The Tank : This is my least favorite ability, but it is still good and will be a great option to pick vs. any mill decks. I personally think it will destroy the existence of Competitive Noise Hivemind decks. It is also a neat way to protect agendas and get back Econ / "win more" cards, however this ability is still much more "lose less" than "win more".

The Greenhouse: This is by far my favorite ability. Just let it sink in, practically a Biotic labor on-demand, only the clicks can only be used for advancing. Oh and yeah, it saves you 4 creds each time you activate. So, some crazy things this ID lets you pull off : Biotic out a Nisei Mk II, the best 4/2 agenda in the game while saving you 4 creds, Play the shell game with snares, psychic fields, and 4/2 agendas, while being able to score them for free next turn, and perform wonderful combos with Thomas Haas, GRNDL Refinery, and Ronnin, which converts your ability into an Econ generating one or a damage dealing one.

So there you have it, a bunch to think about and theory deck on, I believe that this ID is going to be HUGE, gencon top 4 huge.

(Order and Chaos era)
TechnoZ 18
Umm once you flip the ID it becomes and can never be used again. That is to say, you can only use the ability of the ID you choose once per game. — Kroen 5 Mar 2015
Ahhhh, ok, well it still doesn't change the greenhouse and Tank's usefulness since you really only need to use it once, but it doesn't do the brewery any favors. Thanks for the post. — TechnoZ 5 Mar 2015
I feel people should really play a card before makeing a review. How can anyone review something they've never actually used let alone know all the little extra combinations to really give anyone advice on a card usefulness. — Pinkwarrior 6 Mar 2015
For a lot of cards, especially ID's that are hard to evaluate i must agree. With simpler cards comparisons to similar cards are in order. Also who is to say we haven't played with the cards yet? I mean sure the physical cards no, but proxy testing is a thing — GammaCodeX 8 Apr 2015