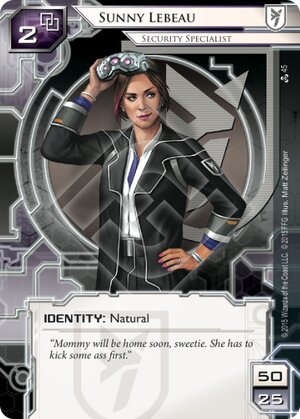 Identity: Natural
Deck size: 50 • Influence: 25 • Link: 2
"Mommy will be home soon, sweetie. She has to kick some ass first."
Illustrated by Matt Zeilinger
Decklists with this card

Many people may be dismissive of Sunny as her 2 doesn't seem to justify her min. deck size of 50, but she's actually worth a second look.

Sunny is actually the polar opposite of Leela Patel: Trained Pragmatist. While Leela is inherently better against Fast Advance decks, Sunny works better against Glaciers.

Cards like Underworld Contact work with her right away without the need for any additional support cards, and with her in-faction Cloud breakers (GS Sherman M3, GS Shrike M2, GS Striker M1), you might want to consider throwing in some Data Folding.

Her console, Security Nexus, costs a whopping 8, but with a high enough link (or enough credits), Sunny essentially gets a free/cheap inside job on ANY ice you choose.

The only problem is getting enough creds and clicks to play all these cards down. Cards like Career Fair, Modded, Datasucker and Multithreader can help with installing cards and making runs cheaper, but you'll want to put down 3x of these because of that 50 card deck size, and it also eats up influence pretty quickly.

If the Corp hasn't won yet by the time Sunny is set up, then they are in for a brutal late game, as no server is safe. Popular cards like Archangel, Assassin and even Ash 2X3ZB9CY are pretty much neutered when you have 5 or 6 , and Security Nexus helps you get by annoying cards like Tollbooth. Even 5 or 6 ICE remotes aren't safe with proper use of Security Chip.

Just don't bring her to a NEH Fastrobiotics heavy meta, they'll score out 7 points before you get a chance to say "Globalsec".

None/fewer of those fun cloud breakers though