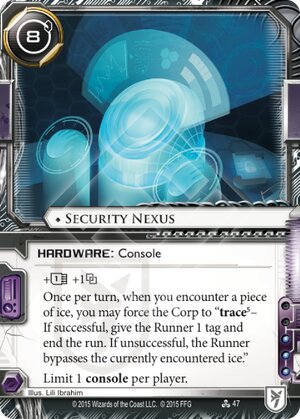 Once per turn, when you encounter a piece of ice, you may force the Corp to "trace [5]– If successful, give the Runner 1 tag and end the run. If unsuccessful, the Runner bypasses the currently encountered ice."

Illustrated by Lili Ibrahim
Decklists with this card

Let us start off with comparing this to Dyson Mem Chip. Both these cards give you 1 and 1. This means you are spending 5 on Security Nexus's ability.

This console has an undeniably powerful ability. And once on the board, can make most servers penetrable. The tempo hit that you will take from installing this will give a big scoring window to the Corp. Against glacier style decks like typical Haas-Bioroid: Engineering the Future, Blue Sun: Powering the Future and Jinteki: Replicating Perfection this is not as big of a deal as you are both playing a long game and will most likely benefit you the most in the long run.

However, against fast advance decks, this tempo hit very well may give the Corp a chance to score their first AstroScript Pilot Program. After this, they are not going to be playing their agendas in remote servers, they will be scoring them out of hand so bypassing ICE is not as big of a deal. Also, kill decks which rely on being ahead economy-wise will take advantage of your low credit pool after this install by putting agendas in open remotes for you to either steal or them to score. With the former you might be hit with a Midseason Replacements or a SEA Source and subsequent meat damage. The latter meaning they can just score 7 agenda points for the win.

(Data and Destiny era)
BobAloVskI 332
Another synergy is Powert Tap. Securrity Nexus is the only card you can include in a runner deck to make sure there will be a trace every turn, so it is the only thing that can turn Power Tap into a reliable drip economy card. With enough link and Power Taps you might even _earn_ money for bypassing ICE. Though, of course, that would require even more setup and shift your power towards late game. — Krams 2 Dec 2015
Hi @krams! Thanks for the feedback. I was not sure about Power Tap specifically for Security Nexus as it is more or less just an extra link. If you were going to be using Security Nexus every turn anyway then it is money for nothing. And as you said if you can get a high enough link it can earn you money. I will add it to the review though. Thank you! — BobAloVskI 4 Dec 2015
I really really dislike this console. Being able to bypass a piece of ICE once per turn, every turn is incredible. But that's not the problem. The issue is that you can never hit a Nexus user with a nasty subroutine. Rezzing an Archer or Fairchild 3.0 against an unprepared runner should result in some pain. But even if they lose the trace, they get to jack out. I wish the console had them face the ICE if they lose the trace. It'd still be an incredible console, but a bit more manageable to play against. — quailman2101 4 Feb 2017
3

IMO the most powerful console in the game the ability to bypass an ICE is Incredibly powerful see Femme Fatale this gives you that ability but on any ICE once per turn. with a link of 5 this will most likely be free to bypass on top of that but even with only 2-3 link it's more than likely to only cost you 3-2 credits.

It's not that it's not got it's down sides however you gonna need some good econ for this thing as it's got a high install cost and the corp is likely to pump the trace if your poor but if your sitting their with a pile of money they won't do a thing. Theirs also cards that works with the console Power Tap,Data Leak Reversal, Account Siphon & Jak Sinclair (tho that's more Jak needing the console).

Data Leak Reversal & Account Siphon are IMO the best of these as they work by putting the corp into a lose lose situation. For instance you Account Siphon and use Nexus to get in do they now spend all their money to keep you out or let you in where you then steal all their money either way they end up poor. Data Leak Reversal works in a similar fashion you run use nexus now they can pump the trace to keep you out but then they get milled and you remove the tag last click or they don't pump let you in and it cost you nothing.

or if your links low enough you get the tag and mill them anyway, this approach also works well with Jak Sinclair as now you can do the run click-less.

It works well for the 1 link shaper runners thanks to Rabbit Hole been a thing. But I feel it's most notable in Nasir Meidan: Cyber Explorer where you can use the console to bypass you own ability or trigger your ability first then use the free money for the trace.

This card has the potential to be a monster of a card. Depending on how your deck is set up to deal with tags (Float them or Adjusted Chronotype/ Qianju PT, or other method of choice ) it will allow you to face check ICE with impuninty giving you free access or costing the Corp a lot of credits to Rez things, then (If) your link is big enough, you can just end up ignoring the ICE anyway (Including annoying "on Encounter" abilities such as the Credit loss from Tollbooth or Auto tag from Data Raven.

Potentially a card people will drop turn one, despite cost just to cost the corp money to rez

(Data and Destiny era)
Shockwave 9
I think this is brutal. Together with NACH and maybe Power Tap (if you've seen my review of that, you'll know I'm a convert...) you can really pressure servers in the early game by running without breakers, and save a load of money in the late game bypassing expensive ice. Definitely one to watch, despite the hefty install cost. — unitled 31 Oct 2015
Given that you essentially need to use 5c to do it, plus whatever the corp deigns to spend, are you really saving any money? — fetish 10 Nov 2015
With your ability and this card, you already have 3 link so it's actually 2c — futureguy 10 Nov 2015
Its not a console for poor runners. Rabbit Hole will make it much more powerful but again its not cheep. A real pain for the corp to deal with though. — Pilltechre 11 Nov 2015
...As i was saying. My house mate drives me mad with this combo. — Pilltechre 11 Nov 2015
Expesive to install yes, but you can easily save 5, 6, 7, or more credits every turn with it's ability. It very, very quickly pays for itself. I'm personally in favor of it being restricted. — quailman2101 29 Nov 2017