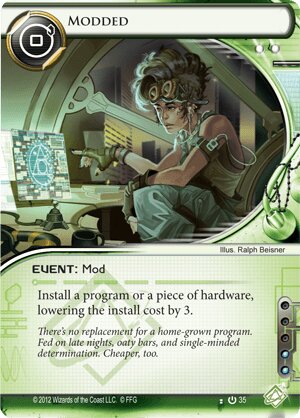 Install a program or piece of hardware, lowering the install cost by 3.

There's no replacement for a home-grown program. Fed on late nights, oaty bars, and single-minded determination. Cheaper, too.
Illustrated by Ralph Beisner
Decklists with this card

Modded is an awesome accelerator, far too often undervalued.

Modded installs a piece of your RIG with a cost reduction of 3 creds. This means that you earn 3 credits and you install something at the same time.

The early game is where modded shines the brightest. The credits reduction at the beginning of the game (on a breaker - Gordian Blade, Snowball, Mimic or on Magnum Opus) is actually far more precious as they have more value than end-game credits. Indeed, having more credits early game gives you a stronger position mid-to-late game. Think of it as an investment rewarding you with compound interests. Besides, it might gives you the slight push you need to have a few lucky access on R&D and HQ while the corp stabilizes.

Further in the game, modded is arguably less useful, unless you built your deck with Modded in mind:

Although Modded is an awesome card (see above), it is not often imported in criminal or anarch decks, as it costs 2 influence points for an economy cards. There are several cases where you might want to import it though:

Flavor In the picture, you can see a runner likely to be Kate "Mac" McCaffrey, installing Magnum Opus on her Rig. On the background, a skyline of buildings can be seen. If it is truly Kate on the picture, then the city might very well be New Angeles (see New Angeles City Hall flavor text). You may also notice two books on the far side of the desk, which means that Amazon has yet to digitalize the whole sum of human knowledge in the Android universe.

The flavor text provides a nice explanation to how the cards work and why Modded is truly a Shaper card: no off-the-shelf hardware or program here, but a creation designed and developed with fondness and love.

(All That Remains era)
EfficiencyCommittee 201
1

Step 1 = Put 3x Modded and some hardware and breakers in your decks.

3x auto include in any shaper deck, IMHO. Would be more auto-include in non-Shaper decks too if it wasn't so much of an influence hog (compare to Career Fair).

Put yourself in a position where you will be doing a lot of drawing (Aniccam, Professional Contacts, Symmetrical Visage, Diesel, Build Script, etc) and put in a bunch of card based econ (Sure Gamble, Daily Casts, Dirty Laundry, Easy Mark, etc) and find a way to spend two cards per click (Comet, Modded, Career Fair) and this is an insanely good card in your likely insanely good deck.

The kind of card you want is the one which makes the best decks better. This is that kind of card.