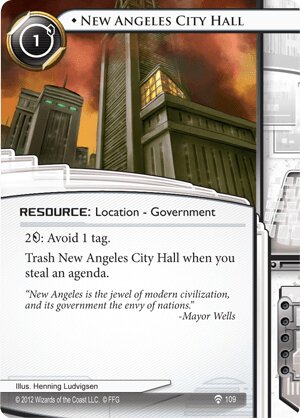 Trash New Angeles City Hall when you steal an agenda.

"New Angeles is the jewel of modern civilization, and its government the envy of nations." -Mayor Wells
Illustrated by Henning Ludvigsen
Decklists with this card

They saw it, rightfully so, as protection against SEA Scorch--as soon as the SEA Source fires, you pay your 2 and ignore it, making it impossible for the corp to follow up with the kill.

In that context...it was generally terrible, because it goes away as soon as you steal an agenda. If the corp brazenly installs and starts scoring a 5/3, you still couldn't touch it without losing the protection you had. And it never served any purpose against the other popular kill-enabler, Midseason Replacements.

Put simply, installing NACH telegraphed in big neon letters "I AM NOT GOING TO RUN FOR A WHILE" giving the corp free reign to score out at their leisure. The only runner who could make this work was Iain Stirling, who was basically okay with turtleing up and waiting for a good moment to strike. For everyone else, a card which hindered your ability to do the very thing you need to do to win the game--that is, steal agendas--wasn't worth playing over the more reliable counterpart Plascrete Carapace.

But the meta has changed, in two fundamental ways. The first is the introduction of Film Critic. Film Critic allows you to take agendas without "stealing" them. This already helps prevent kills by neutering Midseason Replacements, Punitive Counterstrike, Argus Security, Personal Evolution, and other tactics. With NACH, it can go one further, preventing you from losing your anti-tag measures.

The second is the whole mess of new tagging options available to corps as a result of Data and Destiny. In particular, the appearance of a new kill strategy, 24/7 News Cycle+Breaking News, meant that you can no longer avoid the kill by not running and hoarding credits, while SYNC makes it extremely expensive to clear tags from Data Raven, Gutenberg, or News Team. Strategies are now emerging which use tags for things other than simple murder--cards like Quantum Predictive Model, Keegan Lane, and The All-Seeing I hurt you in devastating, potentially game-ending ways, where Plascrete Carapace isn't going to help.

This means that it is no longer enough to simply run early and clear tags afterwards. You have to actively prevent the tags from ever happening in the first place. And that is where New Angeles City Hall comes in. As long as you have money to burn and Film Critic to help you steal, you will never have to take a tag. And that is a wonderful, wonderful thing.

(Data and Destiny era)
tiedyedvortex 4651
Yup yup, you write true words. — Waltzard 2 Nov 2015
Don't forget that it enables really ridiculous turns with Account Siphon, Vamp, or (I guess) Code Siphon. With NACH, you can Account Siphon 3 times in the same turn and end it with 0 tags. — Bigguyforyou518 2 Nov 2015
Add Rachel Beckman and SOT to that and it can four siphons in one turn without taking any tags. — cursor 2 Nov 2015
Good run down of the card. I've written a review of power tap mentioning this, but a couple of those along with this make cards like Gutenburg and Data Raven absolutely trivial to get through. In some situations you can actually be paid to get through ice. Also note a nice synergy with Security Nexus; the corp pays into the trace first, so if they don't you can pay the few creds you need to get past. If they boost by a load of money, let the trace fire and simply NACH the tag away, meaning the corp vamps themselves. — unitled 3 Nov 2015
Is there a decent way to get around New Angeles City Hall + Film Critic? You can't stick the tag to Trash/All-Seeing I, they won't steal agendas to rid of a NACH... do you just have to wait out their economy? — fetish 19 Nov 2015
Film Critic is limited to a single agenda stored at a time. A corp facing this down can take advantage of this. Otherwise, yeah it's mostly a matter of pitting your tagging ability against their economy, which makes it strong against decks trying to "tag 'n' bag" (i.e. land a single tag and then murder the hell out of you) but weaker against tagstorm. — LordRandomness 12 Jan 2016