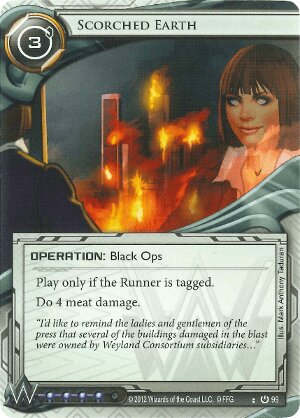 This card is insane. 4 meat damage for a tag and 3 is amazingly good.

If you're building a deck and that deck includes a good number of tagging options, you need to consider 2 of this card. That's 8 influence outside of the Weyland faction, but what's 8 influence when you can win the game out of nowhere? 6-0 down on agenda points? Flatline victory cares not.

This card is so good, all runners everywhere must respect its existence. Even if you decide to not include it in your deck, the mere fact that this card exists should be a worry for any runner who dares end their turn with a tag. This means woe betide a runner running on their last . Maybe the runner needs to keep 2-4 credits on hand just to get rid of tags in their last 1-2 , making their economy even more tight.

Maybe you bait a taxing run then play a SEA Source on your first , having the cash to easily have the trace be successful, then play two of this on s two and three to win. Maybe you score a Breaking News for two free, mostly unavoidable tags, then Scorch. There's dozens of cards that can tag, many, many more cards that can tag compared to what the runner can do to prevent it, so the options here are limitless. Even if you don't win outright with it, trashing 4 of the runner's cards is still a great boon.

Look, just look at all the deks on NetrunnerDB that include it: netrunnerdb.com. You'll notice it's less common in Jinteki decks though, which is because the J-dog has got its own options for things like this (looking at you Ronin).

Plascrete Carapace was put in the very first Netrunner data pack as a neutral card specifically to give wide access to a hard counter, something that Crash Space was only partially capable of (especially being a resource itself, and thus trashable by the corp if tagged). Paper Tripping also exists for a modest 2 influence if you're fortunate enough to start a new turn with tags, but it's pricey at 4 and more situational than Plascrete.

There's also I've Had Worse which, and I'm prepared to be proved wrong on this, doesn't actually fire if you take more damage than your hand size. You lose before the effect triggers. So if you've got 5 cards in your hand and the first Scorch doesn't hit it, you're still gonna lose to the second one. But that's pretty unlikely, and it also lets you draw 3 cards for 1 and it's 2 influence out of faction, so it's still a mostly great card to splash if your meta is still Scorched Earth centric.

In conclusion: Elizabeth Mills is one cold b.....

(Order and Chaos era)
Fentonizer 316
You're right in that I've Had Worse only fires after taking all the damage. So while having one IHW doesn't guarantee you against a double scorched, it'll fire 80% of the time, and having two would. — Clutchpedal 6 Jun 2015
This works well in NBN if you can look past the influence. NBN has the most ways to tag the runner, with various Operations, almost all of its ICE, and even some Agendas. This can quickly lead to fiery devastation. — NobbyNobs 13 Jan 2016
2

Well, for all the Weyland fans out there, Salvaged Memories has been a true feast of meat... Damage, that is.

With the Salvaged Memories set coming out we now have a cornucopia of explosions to serve the runner! One tag? Scorched Earth! Two tags? BOOM!! Three or more tags? High-Profile Target! Don't forget to Consulting Visit to serve the runner the explosion that's best for them!

Now how do we tag? Still have the tried and true methods of SEA Source and Hard-Hitting News. But the question becomes, do we run both? Or just one? What's the ideal tag and bag package now?

I think the right combo is 2x Scorched and 1x BOOM! HPT only out-performs at 4 tags which is less likely to stick and BOOM! or double Scorch is still lethal then. The right tag combo might be 2x Sea and 2x HHN, but it's hard to say. What is the most consistent tag option? Is it worth slotting False Lead to prevent tag removal?

Salvaged Memories will be a new era of blowing stuff up. I'm looking forward to seeing what people come up with.

Great review! SIU is even better with Scorched Earth, since it does not even have any conditions. With this, Flip Switch is making a big comeback as a protection card.

Flip Switch cannot be used on the Corp's Turn