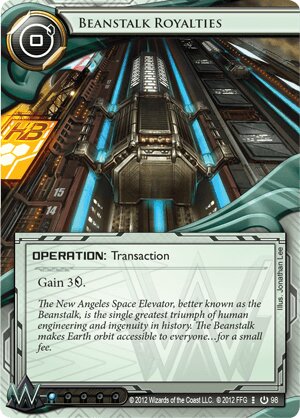 The New Angeles Space Elevator, better known as the Beanstalk, is the single greatest triumph of human engineering and ingenuity in history. The Beanstalk makes Earth orbit accessible to everyone…for a small fee.
Illustrated by Jonathan Lee
Decklists with this card

The corp version of Easy Mark the bonus that Beanstalk has is its Transaction key word, which out of Weyland Consortium: Building a Better World makes it absolutely fantastic. Zero credits for four makes it as good as a Hedge Fund with less investment, and puts the corp up into range to quickly use Hedge Fund into Restructure.

Unfortunately, it has fallen out of style. While it is a great way to jumpstart an economy that has fallen low (or even bankrupt) there are only so many deck slots. There are economy cards that give better profit (for more investment, of course, or more risk) that often work out better for the deck slots available. Economy creeps, one of the few things that gets progressively more powerful in Netrunner, and older cards like Beanstalk fall out of style to make room for economy that gives more total profit. It is still a good solid card; one card and one click to make three credits is a pretty standard baseline, and even other economy cards just get slightly better (one or two more credits) for substantially more investment.

(Chrome City era)
lynkfox 367
It's on par with Sweeps Week as a way to get going from low credits. It's ability to take you into Hedge Fund range is great, but IMO the real strength of Beanstalk Royalties lies in its ability to help you recover from Account Siphon/Vamp and let you ambush the runner with a Punitive Counterstrike or Scorched Earth when the runner thinks you can't afford it. — FarCryFromHuman 1 Jun 2015