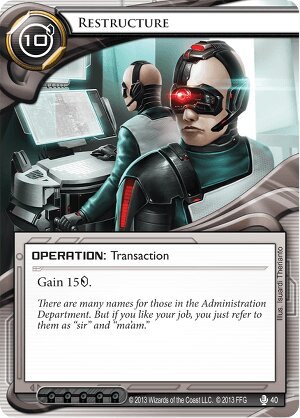 There are many names for those in the Administration Department. But if you like your job, you just refer to them as "sir" and "ma'am".
Illustrated by Isuardi Therianto
Decklists with this card

So, Restructure has been around for a long time and still it got no review. Why? Well, I guess one reason is that there's not much to say about Hedge Fund's greater brother. You play a card to get an instant boost of 5. That's it. So let's take a closer look at this "simple" burst economy card...

When not to use it

Restructure is certainly not for every deck. Obviously, it's play cost of 10 is prohibitive for a large number of decks that really struggle to pile up that much money. But there's another problem: A lot of decks won't really need it anymore once they meet the requirement. Being at 10 can be rich enough for a lot of things you want to do as a corp, depending on your deck.

Other burst economy operations include Hedge Fund, Beanstalk Royalties, Green Level Clearance, Blue Level Clearance, Sweeps Week, Successful Demonstration, Celebrity Gift, Commercialization, Back Channels and probably some more I just forgot. So there are a lot of alternatives to using Restructure or alongside it. And that is only operation based economy, the list of economy assets is just as long if not longer.

Restructure should never be your only economy card. There might be some deck out there that tries to pull that off, but I wouldn't recommend it ever. Of course, everything else that can produce credits combos with Restructure, so I will only mention the most important cards.

When to use it

This is probably the most important part, so maybe I should have started with this part. Well, I didn't.
What do you actually do with Restructure? You keep being rich. You leverage your huge pile of money to acquire an even larger pile of money. In other words: You make sure to always keep being ahead of the runner economically. While this can allow you to pile up huge glaciers with big nasty ICE, you don't necessarily need to float money to do that. But floating more money than the runner can be important for every strategy that involves winning traces.
Traces are often essential for meat damage kill strategies, relying on either Punitive Counterstrike or landing tags with SEA Source or Midseason Replacements to enable Scorched Earth (and Traffic Accident).
But killing the runner isn't the only thing you need traces for. A large pile of money can support builds including Ash 2X3ZB9CY and/or Surveillance Sweep and is generally favorable for decks running a lot of trace s on their ICE (or even as on encounter ability of their ICE).
Explaining in detail how and why those builds work and why they would want to float money would be far too off-topic for a Restructure review, so I'll stop at this point.