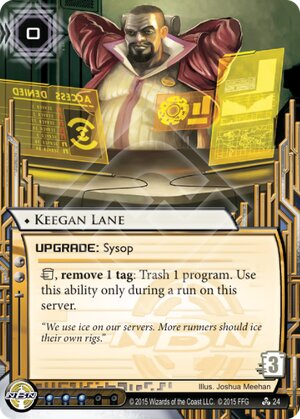 trash, remove 1 tag: Trash 1 program. Use this ability only during a run on this server.

"We use ice on our servers. More runners should ice their own rigs."
Illustrated by Joshua Meehan
Decklists with this card

Kiss your programs goodbye, because the sysop from hell has arrived. Another tag-removal card from this set, much like Lily Lockwell, which adds another interesting tool into tag-centric decks.

Keegan is a new level of trap that, once paired with a tag subroutine, especially strong or unavoidable ones such as Data Raven and Bandwidth, make runners think twice about continuing the run. Doesn't matter if they are running first click to shake the tags off later, the effect happens mid-run. Say goodbye to the only Corroder in your deck!

Other benefits: zero to rez, three cost to trash, part of the "Future guy leans back" set along with Government Contracts and High-Risk Investment.

The downsides: cannot take effect outside of a run on the installed server, so no same turn synergy with Midseason Replacements or SEA Source and loses power once the runner gets all of their breakers out, especially if they Femme a Raven. Also, three influence, so it's harder to get multiples in another faction if you have tags in Argus Security: Protection Guaranteed or some such.

Absolutely worth an inclusion with a tag deck that wants to take the fight to the runner to slow them down. Make them put in recursion or rue the day they met Mr. Lane.

(Data and Destiny era)
Steamwood 284
Oh, those are his arms! I always thought he was wearing some sort of massive supervillain winged collar. — Toper 3 Nov 2015
I mean, a second one. — Toper 3 Nov 2015
Combine him with Team Sponsorship and Breaking News for maximum fun. — lolpaca 3 Nov 2015
@lolpaca: The Breaking News combo won't work (unless you follow it up with Big Brother), since you can only trigger him during a run. — emlun 4 Nov 2015
Oh I jut meant BN as an easy way to trigger Team Sponsorship and keep the Keegans flowing. — lolpaca 5 Nov 2015
is there a timing window between getting a tag from the encounter text on Data Raven and using an icebreaker to break ice that Keegan could fire? like to kill a sentry breaker? — 153351 20 Dec 2015
This and Bandwidth both cost zero to rez. Nasty way to trash an important breaker early game. — LordRandomness 2 Feb 2016
@153351 No, there isn't. 3.1 is the first window for either player to do anything "after" the encounter trigger, and the runner gets to go first. — EnderA 5 Mar 2016
2

We use ice on our servers. More runners should ice their own rigs.

Be careful what you wish for, Keegan. If you're not, every Shaper (and some Criminals) might start packing Sacrificial Construct, and every Anarch deck will run the conspiracy breakers. And if that happens, you'll be completely useless and out of a job.

Our buddy Keegan has always had a bit of a rough go of things. He's free program trashing, but only on the condition that the runner has taken a tag from some piece of ICE or has decided/been forced to float tags in some other way. If the runner is floating tags, you probably have a better way of winning the game than trashing a program. If you stashed Keegan behind a Data Raven, then you're relying on the runner choosing to take the tag, and you're hoping that whatever program you trash has enough of an impact to swing the game heavily in your favor. Thoth admittedly makes this a little more likely by forcing the tag, but then you had to pay 7 to rez Thoth. All of this is assuming the runner hasn't "iced their rig" with SacCon or made it resilient to program trashing by running the conspiracy breakers/Clone Chip.

As if that wasn't enough trouble, Keegan also has to throw the runner a bone and remove a tag, saving them a click and two credits (or three, if you're SYNC). In a meta where everyone runs Criminal decks with single copies of each icebreaker and doesn't play SacCon, Keegan is probably an above average card. In most metas, he's extremely situational and, as odd as it is to say for a program-trashing effect, probably a little underpowered.

If you want to trash programs, you should probably stick with the vastly more flexible Marcus Batty.

(Crimson Dust era)
Netrunnerunner 35
As I see it, putting Keegan Lane behind Data Raven is something where you want an ETR ice behind Data Raven. Then he acts as more of a temporary way to make the ETR really strong while you get your agenda scored. — StarlightCrusade 1 Dec 2017
I get how he's supposed to work in theory. But playing Keegan that way makes you sit around waiting for a positional three card combo plus some agendas to score off of it, while the runner has ample time to get set up and hammer centrals. On top of that, if the ETR you're using is a barrier, their fracter is probably Paperclip, which basically makes Keegan remove one tag to cost the runner four credits. He's incredibly situational, and he slows you down by being a dead card in most realistic scenarios. On top of the stuff I mentioned, Hunting Grounds and Femme Fatale just ignore the Data Raven tag and render Keegan useless, and Inside Job gets by the Raven to trash Keegan. Every major faction has, and is likely to play, something that neuters Keegan. That's a pretty bad place to be for a card that's already situational. — Netrunnerunner 3 Dec 2017
Good points... — StarlightCrusade 12 Dec 2017