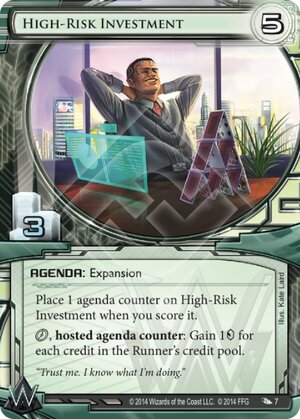 Place 1 agenda counter on High-Risk Investment when you score it.

"Trust me. I know what I'm doing."
Illustrated by Kate Laird
Decklists with this card

It's bonkers even with only one token, Titan Transnational: Investing In Your Future makes it just crazy.

Priority Requisition is good when you are running ICE like Archer which is not as good as it was since all the Faerie, D4v1d and Switchblade are spoiling the Weyland fun. You must use PriReq right away which often may not be the perfect moment. High-Risk Investment gives you more control and I like its burst more then Government Contracts 4 per 2.

(Chrome City era)
konradh 278
I completely agree. I started running this out of Blue Sun instead of a combo of Priority Req and other Weyland 3/5s (I still run one Cleaners). Scoring one as your first agenda makes winning the game much, much easier. The runner can never out-econ you to steal the agenda and avoid the eventual punishment, be it from Scorch or Punitive. — mrdudesir 25 Jun 2015
2

High -Risk Investment assures credit parity with the Runner in a given moment and is easily rushed in its faction. More than that, it's a powerful credit gain on its own, specially against those decks in which that credit gain is needed the most.

In a sense it's a card that gives continuity: It allows Weyland to keep pressuring the Runner after spending 5 credits and 6 clicks scoring it and pairs well with the very own cards that allow it to be scored, namely Corporate Troubleshooter and Scorched Earth.

It will be versatile enough to be played over Weyland other great 5/3 Agendas and Priority Resquisition and there are three identities already that will make great use of it:

BWBI: Extends the middle stage of the game that normally BWBI struggles to compete in because its economy cannot keep up.

Titan Transnational: While possibly uninterested in running 5/3s, the possibility of gaining twice the amount of credits the Runner has without any Bad Publicity is insanely poweful. Many Titan builds will see a second pillar around this very card.