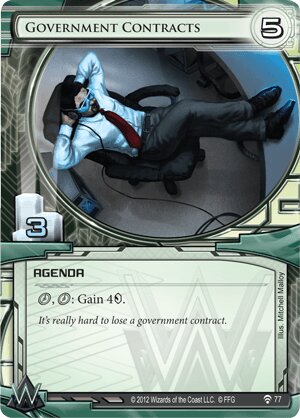 It's really hard to lose a government contract.
Illustrated by Mitchell Malloy
Decklists with this card

This card sums up Weyland. Score points; make money. Its only drawback is being a 5-advancement requirement. But once scored, it provides near-limitless economy for the rest of the duel, on par with Magnum Opus, even if a bit inflexible. It doesn't provide the burst econ that Hostile Takeover or Geothermal Fracking does, but it also doesn't stick you with a Bad Publicity, either!

It decreases agenda density, which is great in kill decks (Punitive Counterstrike appreciates these agendas). If you're scaring the Runner with Project Junebug, you could probably install - advance - advance these agendas and put on a bold face, daring the Runner to act. I'd consider this agenda for any Weyland deck seeking 3-pointers.

(Chrome City era)
LynxMegaCorp 1339
One caveat is that corps only have 3 clicks to spend freely each turn (barring certain shenanigans out of HB). This means that the restriction of "must spend two consecutive clicks gaining money" is a bit harder for corps than runners. — tiedyedvortex 16 Jun 2015
The problem is that there are so few cases where this outperforms High Risk Investment. If you're racing the runner for credits in a kill deck then at some point HRI just flat out wins that race. In other Weyland decks, you still have to click Government Contracts a lot of times for it to be worth even a smallish windfall from HRI. — Greasythumb 17 Jun 2015
I scored 2 Government Contracts, if I then spent the 2 clicks to get paid, would I take 8 or just 4 credits? Hope that makes sense. — bagrunner 2 Mar 2019
No matter the number of Government Contracts in your score area, if you spent 2 clicks on this agenda, you would gain 4c. If you used the ability twice (spending 4 clicks in total), you would gain 8c. — BlackCherries 3 Mar 2019