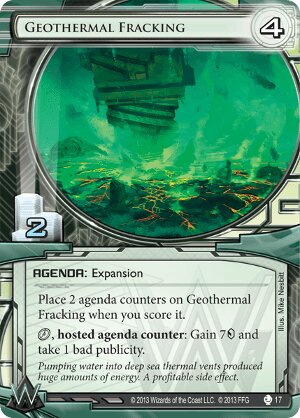 Place 2 agenda counters on Geothermal Fracking when you score it.

One cannot even glace at Geothermal Fracking without Hostile Takeover coming to mind. But, why play one over the other? Because the and bad pub to ratio is almost the same, does it really even much difference? Why yes, yes it does.

The most apparent difference is that Hostile Takeover can trivially be scored from your hand. As anyone playing corp knows, this is a huge deal, and makes most people opt for HT without even giving GF a second look. Additionally, sacrificing HT to rez Archer isn't a big deal, while forfeiting the 2 points from GF to do the same is certainly an act of desperation.

But, there are definitely a few places where GF outshines HT. Most notably, it's synergy with Titan Transnational cannot be overstated. Also, with the lower agenda density that GF affords, you can fit more ice to protect it or other agendas, or those oh so delicious money operations.

Of course, no one is saying that you have to use one or the other, either. Why not use both, load up on the bad pub, and then try and score a Veterans Program or play Witness Tampering at your leisure? Or just ignore removing it altogether, embrace the bad publicity that is Weyland, and laugh at all those Anarchs with Faust as you sit behind your Patched Swordsman. Both cards have their places, and they're definitely not mutually exclusive.

(The Universe of Tomorrow era)
Pikeman 272
To me the obvious comparison is Oaktown renovation. Oaktown is less click intensive, gives you the money right up front, and doesn't give bad publicity. I think for those reasons you should almost always take three Oaktowns before you consider fracking. — Greasythumb 22 Oct 2015
Yeah, but Oaktown renovation is face up, doesn't involve bad pub, and has a different click to money ratio (for the most part). That said, it's definitely an option for an economy engine in Weyland, and should be considered over GF as you mention. — Pikeman 22 Oct 2015
Geothermal Fracking has an upside not discussed yet, which is that you get to delay the cash payout and choose when to take the money. An early rush-score of GF is effective Siphon-proofing against a lot of Anarchs and Criminal decks so long as you can afford to hold at least one counter on it, which neither Oaktown nor Hostile Takeover can claim. — umbralAeronaut 28 Jun 2016
I've had GF be pretty clutch, especially in a meta rife with Account Siphon and tag-me Runners. Most of the time a scored GF goes unnoticed by the Runner, so if they Siphon you to zero and stay tagged thinking they're safe, one GF click into double Scorch will make them think twice. — cygnals 14 Dec 2016