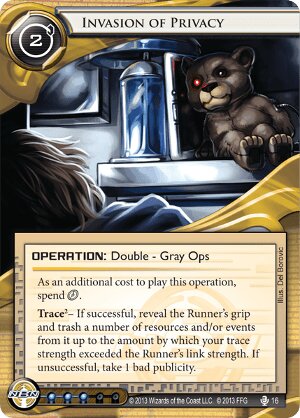 As additional cost to play this operation, spend click.

Trace [2]– If successful, reveal the Runner's grip and trash a number of resources and/or events from it up to the amount by which your trace strength exceeded the Runner's link strength. If unsuccessful, take 1 bad publicity.

Same cost, less one . If you want to snipe out I've Had Worse or Levy AR Lab Access, Salem will do it for you! Still, if you're not sure specifically what to aim for, by all means include this card. You'll still get the Runner to reveal their hand... should your trace be successful.

Another possible use for this card is a way to lower the Runner's hand down to within range of a Scorched Earth or a few Traffic Accidents - probably the latter if you're running this in-faction. It's super left field and possibly halfway to janksville, but I'd love to see it be pulled off.

Edit: Another thought in a similarly janky vein would be to combo this in Jinteki with Precognition and Accelerated Diagnostics, using Invasion to peek at the Runner's Grip, then using Salem's to snipe cards out, and following up with a damage dealer like Neural EMP or even Ronin once the Diagnostics resolve. Probably a snowball's chance in hell of that ever lining up, but hey. These are the jokes.

Finally, if it came down to picking a giant boat over a creepy animatronic bear, I'd prefer the card that doesn't give me Five Nights At Freddy's flashbacks D: D: D:

(The Liberated Mind era)
Agenarchi 91
Never thought about using it with SE before, good idea. — TheBytemaster 26 May 2016
2

This is one of those NBN cards that would be great in a number of decks, if it weren't for the fact that it is too high in influence for any deck that would want it. Yet, it sees use in GRNDL, a deck with only 10 influence. If it didn't give you a bad publicity when you inevitably fail the trace, it would be much more playable, and for that reason, it's only a matter of time before expose makes the card perhaps a little better. You need 3 copies of the card to see it early with any real consistency, and you need to be pretty rich to have it make sense, so if someone wants to make a next design deck with 3 of these, 3 jacksons, and nothing else, you're welcome to fail at everything else you want to do in the deck. Winning is probably one of those. That being said, if you get this early against the right runner, it would definitely help to know what is in the runner's grip, but then if they just draw what they need to get past you early, what good is it if you aren't trashing all of the runners economy? When this cycle gets rotated out, hopefully they'll make a better version of the card that doesn't take up most of your turn, doesn't have to rely on a weak trace that needs to be at least 5 credits more than what the runner can pay, and doesn't give the runner an extra credit for the rest of the game each run when you fail with it. Now, in a draft deck, this card would be so ridiculous, those problems...aren't really problems. Too bad it'll be passed up for sansan city grid every time.

(Breaker Bay era)
cmcadvanced 25
Have you considered that this is actually a strong counter to I've Had Worse? This can pluck IHW right out of the runner's grip without it firing. Perhaps this might become part of some kill decks, possibly in conjunction with Punitive Counterstrike? That said, agreed in general that this card is a bit underwhelming and very hard to use - I've tried many times! — Ber 7 May 2015
Try comboing this + Data Hound + Targeted Marketing for some huge credit gains... — lynkfox 8 May 2015
all good points. It's a great counter to I've had worse if it's in the grip, else you've lost two clicks, and you can't use it and double scorch without some serious efficiency committee/biotic labor plays. The targeted marketing thing is probably legit, but it's just going to be played around by good runners — cmcadvanced 9 May 2015