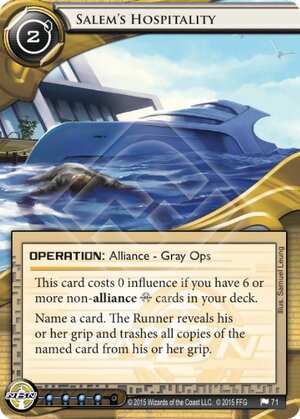 This operation costs 0 influence if you have 6 or more non-alliance nbn cards in your deck.

Choose a card name. The Runner reveals the grip and trashes all cards with the chosen name revealed this way.

Illustrated by Samuel Leung
Decklists with this card

My first thought here is in a Weyland kill deck. A Weyland deck running three Jackson Howard and three SEA Source or three Data Raven can slot this in for no influence. Trash away the runner's pesky I've Had Worse before going in for the kill.

Does your opponent have a critical card their deck is built around? Blackmail Val? Chameleon-saurus Hayley? Ice destruction Whizzard? Pitch those linchpin cards into the garbage! Even if you DON'T kill critical cards, for 2 credits and a click you now know exactly what the runner is holding and if you have a safe scoring window.

A fun interaction; call "I've Had Worse", perhaps before your SEA-Scorch. They have to trash em, but because they didn't trash it with damage, they don't get free draws! Also, feel free to review their discard pile before calling your target; it's in the core rules that you're allowed to review your opponent's discard at any time, so you can get some insight into what you might want to kill.

Try targetting Levy as their stack gets thin for some real tears!

And, of course, if you have more than one of them in hand you can do one, and even if it whiffs, you know exactly what they're holding and can now target something that will REALLY hurt.

NBN is a particularly easy Alliance to activate, also, since every corp deck is going to run 3 Jacksons. Many decks are probably NBN-allied without even trying.

This is a very fun card, I'm going to try playing around with using this instead of Housekeeping in my Argus deck, for targetted destruction instead of the added stress pressure of a possible 1/turn discard they get to choose.

(Salsette Island era)
Sappo 26
Pretty significant influence savings if you go the alliance route. I love a bargain! — quailman2101 30 Apr 2016
I'm thinking Chronos Protocol with 3 Jacksons, 3 Kala Ghoda Real Tvs, and 3 of these. Target their programs in most cases. If you are playing MaxX then go for their levys and same old things. — quailman2101 1 May 2016
This is also the obvious counter to trash decks centered around the upcoming Fear the Masses. — Akanthinos 1 May 2016
In Chronos Protocol, I got a surprise flatline (surprising to both of us,) because I had 2x Neural EMP and this, and he had three cards. EMP once, look at hand, Salem the two Turning Wheels, EMP for the kill. — NoSoup4you 26 Oct 2016
4

A highly versatile and useful card for any corp. Even if you have no information on the runner's hand, you can guess one of the more popular breakers before putting down the corresponding ICE, guess a common economy card, or simply protect yourself from bullshit. The click and 2 credits is often worth knowing the contents of their hand, even if you don't trash anything. No fracter in sight? Install that agenda and go to town.

Out of Chronos Protocol: Selective Mind-mapping, Salem's Hospitality gets even better. Not only do you get perfect information on what to name, but it opens up more potential kills. At worst, it's copies 4-6 of Neural EMP, but often you can hit multiple cards, especially against decks that hold onto duplicates. You'd be surprised how often you can kill someone at 2 or 3 cards just for running the previous turn.

Bonus points for being an alliance card with actually restrictive influence.