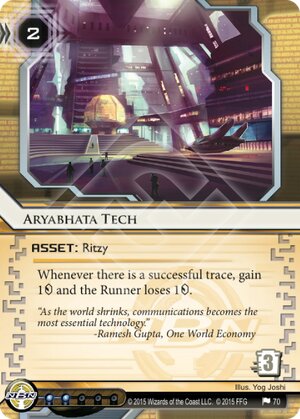 Whenever there is a successful trace, gain 1credit and the Runner loses 1credit.

"As the world shrinks, communications becomes the most essential technology." -Ramesh Gupta, One World Economy
Illustrated by Yog Joshi
Decklists with this card

I posted this on the CotD thread on Reddit, but it was longer and more interesting than originally intended.

'Deceptively good' is my analysis of this card, though I've yet to find the perfect deck to take advantage of it.

This card combos with a lot of other nice cards like Resistor (which becomes almost a popup) and Ash (better think twice about letting the trace fire then running again!). Things the runner would often let fire (like Gutenburg) suddenly make them pause. It's a great one have against a runner going tag me, as suddenly those 'just pile on more tags' runs are draining their accounts and padding yours.

With the help of a very kind stranger on The Facebook, I built an ArbTech combo deck which used Broadcast Square, Reality Threedee and Muckraker to put the runner in a real bind; you rez the broadcast square, then the 3Dee and fire the trace. If the runner doesn't pay into it, they lose 1-3 and you gain that much.

Then proceed to rez your other 3Dees and your muckraker, which then itself fires 3 traces and ends the run. At that point, slap down a Manhunt, rez a city surveillance, and watch the runner become truly miserable.

This deck was a bit janky but it had a load of crushing victories (losing only, weirdly, to Adam and Sunny). It was a bit miserable to play as and against, though, so I've shelved it for the moment.

I've tried ArbTech in other decks since. It's a lovely combo with Troll and things like Turnpike or News Hound, or especially with Manhunt, which is becomes drip economy. That said... I've not really had any luck using it in a 'standard' deck. It seems too fragile at 3 to trash, and you can't really afford to protect it too heavily. Maybe I've had bad luck to come up against rich runners, I don't know. I'll keep experimenting because I'm sure there's the nugget of a powerful deck here.

(The Liberated Mind era)
unitled 464
Surveillance Sweep is important to note. Since it forces the Runner to pay first for traces, you can very quickly get to a point where you outpay them and collect the benefit every time (if you have a decent amount of creds, then the first time the Runner pays high to keep you out you just let them beat that trace and they're out however many creds they paid) — LordRandomness 2 Jun 2016
Can you please link the cards you're referencing in your review? As a new player I have no idea what the hell you're talking about — Lagomorph 4 Aug 2016
Adding Door to Door in a Making News deck makes this card absurdly powerful. Pump the trace up with your 2 recurring credits, and add as much credits as aryabhata techs you have rezzed. This synergizes with News Hound pretty well too. — LuteMiope 10 Mar 2017
1

Summary: A card that compliments traces that are weak in payoff. E.g. Gutenberg, Macrophage, Traffic Analyzer.

Traces can be explained in game theory, where the Corp decides on their strategy (Boosting trace) before the Runner decides on theirs (Boosting Link). Therefore as the Corp, it is best to make the payout of both Runner choices as close as possible, since it is certain that the Runner will choose the least bad option given optimal play & similar value assessment.

The only basic action available for the Corp to change the payout balance is boosting the trace by using credits. This lowers the payout for winning the trace (since credits spent are "wasted"), BUT does NOT affect the payout for losing the trace (each credit spent is contested by an equal spending by the Runner, assuming equal value of credits for both side). The action favors traces with an payouts far outvaluing the credits that the Corp would spend for it, common examples are SEA Source in the SEA Scorch combo, Punitive Counterstrike, Hard-Hitting News. These cards do not work well with Aryabhata Tech since the winning case payout is already so far ahead that the Runner would be contesting the trace whenever possible most of the time.

This card increases the payout for winning the trace, which increases the expected payout of the trace. In my jank Aryabhata Tech, Surat City Grid, Traffic Analyzer trace spam deck, this card sways the balance of the Traffic Analyzer trace payoff matrix. Now instead of just a +1 (win) vs a +2 (loss), which Runners will let it fire obviously for a marginal expected gain of +1, it is now a +3 (win) vs a +2 (loss), where Runners are expected to contest for a gain of +2, double the original payout.