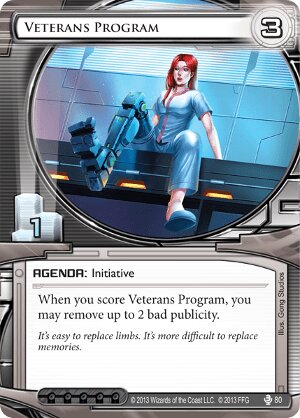 When you score Veterans Program, you may remove up to 2 bad publicity.

It's easy to replace limbs. It's more difficult to replace memories.
Illustrated by Gong Studios
Decklists with this card

Veterans Program offers A corporation an opportunity to soften it's image, selflessly giving of it's resources to help the people that society owes so much to... Still some skeptics might say that generating public good-will to cover up other activities behind closed doors is jut the kind of long-game such corporations might want to play. Veterans Program represents a bad publicity removal agenda 2 times as efficient as Clone Retirement which though requiring more resources it isn't quite as painful if unsuccessful.

Clear up bad publicity from agendas: Geothermal Fracking, Hostile Takeover, Posted Bounty, Profiteering, Project Ares, Vulcan Coverup all have the negative side effect of inducing bad publicity, Veterans Program could be decent compliment to any of these.

Easier to score: Stacking up bad publicity makes NAPD Contract harder to score clearing them out of the way with Veterans Program might be advisable before putting NAPD Contract down to score

Completely flush resources : With the prevalence of Data Leak Reversal for example Veterans Program can be used to clear off bad publicity ahead of using The All-Seeing I to completly wipe the board of all the runners resources, which unless the runner had 3+ bad publicity on the corp this would be unpreventable.

Efficient Double Duty: Clearing 2 bad publicity in addition to scoring an agenda point is what this card is all about

Counter Runner Mischief: There are several cards Runners can use to induce bad publicity such as Valencia Estevez: The Angel of Cayambe who's ability can be completely countered once Veterans Program is scored, Activist Support, Investigative Journalism, Leverage, Tallie Perrault. Futhermore the following runner cards provide a distinct incentive for the corp to remove bad publicity: Blackmail, Investigative Journalism, Itinerant Protesters, Tallie Perrault

Veterans Program is pretty straightforward but mostly defensive compared to many other 1 point agendas available for each corp. Still as a neutral agenda it's waiting to help any corp repair it's reputation if only deck slots weren't so tight.

(Data and Destiny era)
chris_walker 677
Let's not forget that it pretty much turn of standard build Val which carries Blackmail, meaning that barring DDoS shenanigans, you can still rez your ICE. Speaking of Val, let's not forget about the prevalence of DLR Val, the strongest counter to which is All Seeing I & if the Corp is floating 0Bad Pub, then the Runner can't stop it & you trash all their resources. Still though, I'd only consider it in an Argus deck if I was planning on a Weyland 1,000 cuts type deck with a couple of illicit ICE. — Legion1979 15 Dec 2015
Thanks Legion1979, countering Val, Blackmail, All-Seeing-I combos have been added. Not sure what DDoS is refering to (presume its a strategy rather than a particular card?) — chris_walker 15 Dec 2015
There is a card called DDoS. It is a very good card — forktines 16 Dec 2015
Ok found it, not sure why I couldn't see it before. — chris_walker 16 Dec 2015