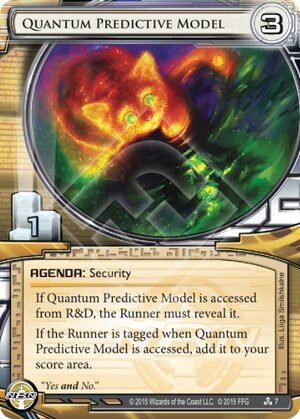 While the Runner is accessing this agenda in R&D, they must reveal it.

When the Runner accesses this agenda while they are tagged, add it to your score area.

"Yes and No."
Illustrated by Liiga Smilshkalne
Decklists with this card

Something to know about this before going ham with the combos, is how this interacts with other cards, and why.

The first thing to know, which I had needed to get clarification for, is that "the order the conditions are written on the card matters", which is to say, "If A when B then C" is not the same as "When B then C if A"

So, at this point you are probably thinking "Get to the point already!", so here you go:

Casting Call does not work with Quantum Predictive Model, as the "If" is checked before Casting Call tags the runner. This is specifically mentioned in the FAQ

It is also worth noting the interactions with Film Critic and Maya as well.

Note: I have re-written this review from it's original state, as I was incorrect about why it interacted the way it did with Casting Call, meaning I incorrectly assessed it's interaction with Film Critic, hence the first four comments saying that this is incorrect.

(Business First era)
Quarg 255
I disagree vehemently. — Smashman 21 Mar 2016
I also disagree. For multiple reasons. — An0n3 21 Mar 2016
Sorry for double post, this site's formatting and inability to edit comments is a mystery to me sometimes. This interaction does not function that way. For starters, this ability is not a constant ability. It's an "If" conditional. — An0n3 22 Mar 2016
That's not correct. The scoring-if-tagged of QPM and host-on-access are both abilities that resolve in the same step of the TSR. Unless NBN has lost its mind and imported Offer You Can't Refuse, Film Critic has the option to host it due to turn priority. If there's a ruling that states otherwise, please share. — GrantZilla1979 22 Mar 2016
Sorry about the mistake about how QPM works, particularly with regards to it's interaction with Film Critic, I have completely re-written the review, correcting the interactions, and reasoning. Sorry for the inconvenience! — Quarg 25 Mar 2016
2

This card works best in NBN kill decks. The basic strategy is to tag the runner with Midseason Replacements, ideally with so many tags that the runner cannot practically remove them. Once this happens, the game comes down to a race- the runner tries to assault R&D for the scoring win before the corp kills them! As this R&D assault happens, reveals of this card result in a score for the corp rather than the runner.

The key point is that the agenda can't be scored by the runner, rather than that it is scored by the corp. Most of the time the corp is drawing for the killing combo and is not trying to win by scoring. So the card really delays the runner scoring out.

As a result of the above, Film Critic does somewhat hurt the potential of the card since it can void its main ally, Midseason Replacements. With the recent move to 24/7 News Cycle as a killing medium, the number of tags landed is generally reducing, and thus the runner is less likely to retain multiple tags for long.

Having said that, this card is wonderful against the current Data Leak Reversal runner decks, which tend to tag themselves as part of their attack combo. Such decks can help the corp to win on points by accessing this card. Combined with the Haarpsichord Studios: Entertainment Unleashed ID, multiple agendas in remote servers can help mitigate the mass milling strategy and give the corp a reasonable chance of scoring out.

(Data and Destiny era)
Hayati 51
Nothing better than seeing Paparazzi in the runner's rig when they've already milled 3 QPMs into the bin. — Heartthrob 20 Nov 2015
Film Critic negates the agenda itself too. Even if they are tagged the runner can take this if they have film critic. — quailman2101 24 Nov 2015
2

Nice little potential 'trap' and something that tag me runner decks may be regretting that they ran themselves full of tags besides for upon finding it.

And who doesn't love dual-natured kittens? (No, seriously, I love the look of the card.)

I will definitely be using this agenda in any NBN deck I build with tagging in mind. 3/1 agendas are normally in an awkward position since each faction has a 1 pointer that only costs 2, and 3 advancements could instead get you a 2 pointer (In NBN's case Project Beale, or 2 points and an easier future agenda with AstroScript Pilot Program).

However, the great thing about Quantum Predictive Model is when you are using a tag storm deck it becomes something the Corp usually wants but can't have: a safe agenda. There are still a lot of stubborn runners out there that float tags instead of getting rid of them. This card punishes them for that. If the runner is double tagged, Quantum Predictive Model becomes safer than NAPD Contract, requiring 2 clicks and 4 credits to be allowed to steal it again, then they still have to make the run. Beyond 2 tags though, it just keeps getting better. If the Runner is too far into the eye of the tag storm, they may never have any hope of stealing Quantum Predictive Model. Best of all, even if they have given up on taking Quantum Predictive Model, they can still accidentally give it to you for free by accessing it from R&D. Who cares about it increasing your agenda density if the Runner can't steal it anyway?

Of course, it isn't perfect. If the Runner has a better answer for tags, or if your tagging ability isn't as good as you thought when building the deck, you're going to regret picking this over some 3/2 agendas. But ultimately, I think it's a welcome addition to NBNs toolbelt.

(Data and Destiny era)
FemurLemur 2
Film Critic > QPM, apparently. Will likely need an official ruling because it contains both 'if' and 'when' which could be ruled as either a conditional or a constant, but it will probably be ruled as a conditional. — Sabin76 14 Dec 2015
I'm guessing the ruling will state that since the accessing happens on the Runner's turn they get to choose which effect resolves first. The Runner would choose Film Critic, then QPM never resolves because it is "no longer being accessed" per Film Critic. Guess we'll see. — FemurLemur 16 Dec 2015
What's interesting is that if my guess is correct, Film Critic doesn't negate this agenda exactly the same way it does a lot of others like NAPD. Since this agenda is likely to be run in Tagstorm decks, Film Critic (being a resource) is already the best possible target for trashing. So it would end up being a tense game where timing is everything. At least in theory. Maybe in practice Film Critic would just shut this down entirely. But hey, it's only 3 to advance, so it still wouldn't be worthless in your deck. Its worth would just be diminished greatly — FemurLemur 16 Dec 2015
Works great with Data Raven. If they can't avoid the mid-run tag (which they can't unless they run Decoy, Forger, etc...) then they have no hope of stealing this. You simply can't avoid the tag. — NobbyNobs 16 Jan 2016
Does it work with bandwidth? — munsonelliot 31 Jan 2018