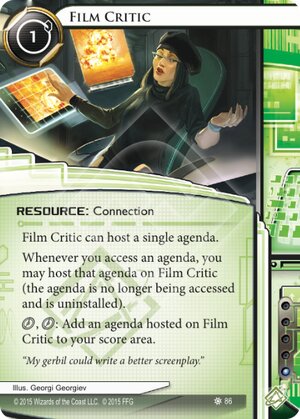 Whenever you access an agenda, you may host that agenda on Film Critic (the agenda is no longer being accessed and is uninstalled).

click,click: Add an agenda hosted on Film Critic to your score area.

"My gerbil could write a better screenplay."
Illustrated by Georgi Georgiev
Decklists with this card

Because simultaneous effects are resolved in the order of the active player's choosing, runners can host agendas on Film Critic before any "on access" or "when stolen" effects trigger. Film Critic completely disables NAPD Contract, TGTBT, Explode-a-palooza, Fetal AI, The Future Perfect, Haarpsichord Studios, Argus Security: Protection Guaranteed, and Jinteki: Personal Evolution. Because adding the hosted agenda does not count as stealing an agenda, it also gives a buff to New Angeles City Hall - making it nearly permanent - and throws a wrench into any Midseason Replacements decks.

A few notable cards synergize poorly with Film Critic - Leela Patel: Trained Pragmatist will only be able to bounce cards when the Corp scores agendas, Kraken and Human First won't fire, and Corp currents will never be wiped from the board.

Film Critic is also a connection, making it vulnerable to Snatch and Grab and Contract Killer. If the Critic is trashed, the Agenda will end up in the Corp's archives - which may not be a bad thing.

Film Critic represents one of the most significant forced meta shifts in the game, on par with Plascrete Carapace and Clot. Easily splashable into any runner deck, the Critic is a total shutdown of the common Butchershop deck archetype, with Thousand Cuts Jinteki taking a hit as well.

(Old Hollywood era)
psi_lifeup 202
Just want to point out that because its not unquie and low Influence it works really well for Iain Sterling allowing you to stay behind even tho you have the points on Film Critic — Pinkwarrior 12 Aug 2015
I am so happy to see this card. As you pointed out, its the perfect counter to napd contract and ambush agendas; napd contract in particular being in almost every corp deck. The reason I love this card the most is because it counters Midseason Replacements. I hate, hate, hate that card and really felt it needed a serious nerf. Film critic will probably go in almost every one of my decks just to counter midseason; plus it's other benefits. — quailman2101 16 Aug 2015
In my opinion, the counter to Film Critic (other than tagging and trashing) is Corporate Town. Most of the decks that run agenda-stealing shenanegans run cheap agendas, perfect fodder for Corporate Town. It's the Cyberdex Virus Suite vs Film Critic, albeit costing 2 Weyland influence. — EnderA 22 Aug 2015
FIlm Critic also has the advantage of allowing you to "have" agendas that do not count towards your score. In other words, Iain can reap large amounts of cash while still having his points within arm's reach. Just pray you're not two clicks short... — skansfry 14 Sep 2015
I don't understand why it would counter TGTBT — AshEnke 22 Sep 2015
I don't see why it would counter TGTBT. Film Critic triggers on access, so it prevents "on stolen" reactions, but you still access the agenda. What am I understanding wrong ? — AshEnke 22 Sep 2015
@AshEnke Film Critic specifically says "the agenda is no longer being accessed", so basically it forcinly ends the access step, and any unresolved "when accessed" triggers are cancelled. — mplain 23 Sep 2015
As I mentioned in an earlier comment, I was super happy when this card was released because it effectively neutralizes Midseason Replacements. And indeed it does, it's great!p]k'hbt'o0=6gocz llllllllllllllllllllllllllllllll — quailman2101 29 Mar 2016
My son did that. Continuing...This card though, seems way too powerful for it's low, low install and influence cost. It directly counters a ton of cards. TGTBT, Fetal AI, The Future Perfect, Quantum Predictive Model, Award Bait, Explode-a-Palooza, NAPD Contract, Midseason Replacements, PE, Argus, Punitive Counterstrike, Old Hollywood Grid, Strongbox, Red Herrings, and maybe more that I can't think of at the moment. — quailman2101 29 Mar 2016
Predictive Algorithim, Lakshmi Smartfabrics... — quailman2101 30 Mar 2016
Utopia Fragment, Haarpsicord — quailman2101 11 Apr 2016
This needs to be nerfed. Many really good strategies are being shelved because of this. — amanning 8 Jul 2018
18

[Story time with H0tl1ne! Now with more speculation than usual.]

The weird lady with a screenplay-writing gerbil has been around for a while and we still can't explain how the heck this card was supposed to work flavor-wise. I hope to give it a go in this review.

You've met that kind of a person at least once in your life. This person might not be mental, crazy, bonkers or loony, just a little too much... focused on a thing. Be it that guy who keeps telling you about the video series he'd been watching lately, or a kid who goes on without a stop about Netrunner (wink!), or...

Yeah, you get the idea. Fixated - this is the word.

Now imagine befriending such a person. Sits all day in their mom's basement and just watches movies. Knows every bit of cinematic trivia since Lumière brothers. Amazing pop-culture trope knowledge. There is a downside though - everything they know, they've learned from the TV. And everything they see, hear, think is immediately associated with it.

You're in the business of netrunning. Instead of just going public with every bit of dark secrets you steal away (and attracting some instant karma), you forward them to your delusional friend for safekeeping until it can be safely released. This results in many hilarious situations, because everything you give them, they immediately assume to be a movie script.

"Hey, have you heard of Explode-a-palooza?"

"Yeah. Two stars out of five. The same bit of dissolved cereal every year."

"Psh. Please. An obvious jump on the academy awards, is all."

"Hey, Miranda Rhapsody is making a new musical with a lion, a scarecrow and a bioroid!"

"It's called Wizard of Oz and was around since, I don't know, forever?"

Wait. It gets worse.

"Hey, have you heard of the psychic clones evil government uses to fight crime before it even happens?"

"Yeah. Minority Report. What are you, living under a rock or what?"

"So I've had these two guys following me around. Strange haircuts, fabulous glasses, guns..."

"You mean Starsky & Hutch. Yeah, seen that too. Bloody philistine."

"Yo, ever heard a corporation amass so much money they would buy a third-world country on the spot?"

"I've been on the news. Now they're trying to murder me."

"Oh, you've finally watched Network! How did you like Beale's speech anyways?"

"Wait, you know about Beale?"

"So I've been in my office and some guy in the glasses tried to shoot me! In the head!"

"Wow. Congrats on discovering Matrix. Spoilers: don't watch the second one. Third one... Know what? Don't watch it, too."

"Two of big-ass AI merging together to avoid Turing police, it's..."

"...Neuromancer. Come on, Gibson is so eighties."

"Don't you tell me they're pulling 'Hoff back from the dead for this one."

"Know what? You're officially the worst person ever."

Film Critic has a lot in common with Clot for me. It's a card that directly counters a number of decks when it hits the board, turning entire strategies on their head. It's also a card that, simply by existing, changes the meta. It doesn't actually matter all that much if you're running Film Critic. It matters that Film Critic exists, and that some people are running it. It means that people who are building corp decks built primarily to take advantage of on Access abilities have to either abandon those decks entirely (as it was expected would happen with Fast Advance), or remove tertiary pieces of those decks to include things like Snatch and Grab or Contract Killer to answer people who are using Film Critic.

By the same token, it now means that "all you have to do" as a Runner is have Film Critic. And Clot. And Plascrete Carapace or IHW. And....

Film Critic has the upside that it addresses a number of the most popular Corp decks in the meta that aren't Fast Advance - Butchershop can't affect you if you don't steal any agendas. RP's self-protecting agendas like The Future Perfect become far less safe. NAPD Contract's ability to hide from Runners with less than 4 credits is gone. Even Fast Advance suffers a bit, as NAPD looses the ability to be a "safe" or tempo destroying install.

However, it suffers from the fact that it can only be found by drawing, or by using Hostage, which is reasonably rare. Street Peddler can help if you get a good draw, and has the same "Surprise! I can deal with you!" quality. It's also a resource, which means decks that want you tagged only have to ensure they have a way to tag you that isn't based on agendas and it's turned off.

But to go back to the beginning - that's not really the point. The point is that it exists. And at 1 influence, it's potentially in every deck out there.

(Old Hollywood era)
Wookiee 89
Just been playing against an Argus deck and Film Critic was awesome. Taking Agenda's for free and turned the Punative off completely. Really love this card right now. — Topaxci 10 Aug 2015
I was that Argus! I tried to leverage Casting Call to force difficult plays, but once Film Critic hit the table, Casting Call, Argus and potential Punitives became obsolete. — LynxMegaCorp 10 Aug 2015
That's why i run 2x Contract Killer since that card was released. Perfect way to shut the critic up. Bullet between the eyes. — Letsaros 16 Sep 2015
If a Film Critic gets trashed while hosting an agenda, wht happens to the agenda? — rhoddry 25 Sep 2015
It goes to the archives. — tendermovement 2 Oct 2015
2

The only answer I've come up for outside of Weyland who has cards like Contract Killer and Corporate Town for dealing with this, is to try overload a runners Film Critic. I've been playing Butcher Shop, which this card pretty much destroys. I've had some success by leaving enough agendas in archives to overload the film critic, enough to fill them up, one more to let things like Midseason Replacements trigger because they have to steal it but not enough to let them win the game. Since this came out you see a lot of people waiting until they have Film Critic and New Angeles City Hall up and keeping money to avoid tags. So put all your agendas in the bin as they come, rescue them with Jackson Howard when you need to but leave in enough to overload the critics and get your Midseasons off. Then if you don't have your kill cards in hand, you can kill the Critics, maybe some other resources too. If you're rich enough, you'll put so many tags on the runner that its either a race for them to clear the tags or you to get your kill cards.

Just don't try it by leaving NAPD Contract in the bin as the runner can opt not to pay the additional cost.