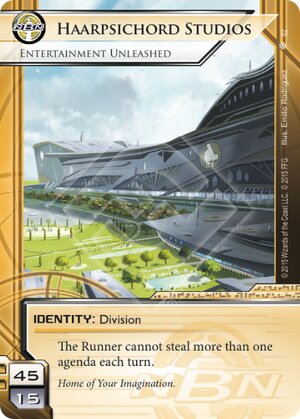 The Runner cannot steal more than one agenda each turn.

Home of Your Imagination.
Illustrated by Emilio Rodriguez
Decklists with this card

Run 20 1-pointers, money, Midseasons, SEA Sources, Scorches, Traffic Accidents and Closed Accounts and 3 slots to season to taste (Casting Call right now for me, but I'll switch to Snatch and Grab if Film Critic enters my meta). I've got a 93% win rate with it against L4J, which is easily the worst match-up for it, ignoring Film Critic, at least of anything I've seen in my meta.

-If you get at least 2 points above the runner, you've almost auto-won. -Profiteering is pure gold. -The Future is Now is amazing for it, once it's legal. -Money only matters for traces, scoring agendas, and scorches, which makes it easier to sit on a pile of cash. -False Lead makes Casting Call a death sentence. -Breaking News is best left out and then scored, sniping economy or opening up a scorch if they fall under 4 cards (or traffic accident if they fall below two). -The deck is amazing for tourneys, as it's easy (and quick!) to play, but exerts a lot of mental pressure on your opponents.

(Old Hollywood era)
krokmaster 4
The meta will adjust. Paper Tripping might beome a thing, Paparazzi will be out, Plascrete and IHW can counter damage, and Edward Kim will be a pain for a deck with Midseason as wincon, but no ICE. Also Keyhole makes this deck a sad panda. Also, Sunny Lebeau laughs at your puny traces. — HolyMackerel 12 Aug 2015
Possibly the first time a card review has inspired fan fiction: http://netrunnerdb.com/en/decklist/25536/the-defrosted-honeypot — TheseGlyphs 27 Aug 2015
3

This is a great ID, even with Film Critic out there.

For one, you can kill the runner without relying on stolen agendas. Just score out Breaking News plus another agenda. Next turn, activate 24/7 News Cycle to give the runner two tags, before double Scorched Earthing them. The runner can defend this with a Plascrete Carapace, but you can repeat this combination multiple times during the game. Lots of low point agendas work well here. The ID further supports this strategy by guarding against multiple agenda loss, despite having a higher agenda card density.

In addition, the ID is good at scoring wins too. Once you are ahead you can start playing two agendas down to the table. The runner can take at most one, leaving the other for you. Quite often this can lead to forced wins.

Besides the above, you still have the "regular" kill methods (Midseason Replacements, SEA Source) if Film Critic is not in play, as well as the AstroScript Pilot Program fast advance capability, making for quite a versatile deck.

Another major benefit is that the deck is quite easy to play for the corp, whereas the runner has to analyze the game state a lot. Games are fast too, making this an excellent ID for tournaments.

Overall, it's a cracking good ID!

(Data and Destiny era)
Hayati 51
Kitsune is a good way to get that initial advantage, slipping through a two- or even three-pointer by forcing the Runner to steal a one-pointer while it's on the board and partially advanced. Plus there's all the stuff your review of Franchise City talks about! — LordRandomness 6 Jan 2016
2

What does Fast Advance hate the most? Late game. They want to get seven points on the table before the runner has built enough money and installed breakers to break their taxing but porous ICE such as Eli 1.0, Architect and Wraparound. By the time we get to a late game scenario, the runner will usually have either Medium, R&D Interface or Legwork HQ over and over again to steal 2 agendas. Haarpsichord Studios gives you a small "panic button" where in that late game, if they steal something, they won't run again, and probably won't realize that you've been holding two Project Beales and a AstroScript Pilot Program just waiting for that draw of Biotic Labor. Noise looking through your Archives? He's going to take three full turns to steal each agenda for the win, giving you ample time to get Jackson Howard out of R&D and shuffle them back in. And we've all had that one game where the first two turns have been "Run R&D. Oooh, agenda! Run it again! Oooh, another one! Run it again! That's game!". And Old Hollywood is giving it a few nice tools with the new NAPD Contract replacement Explode-a-palooza to gain 5 credits without them stealing a thing.

But the biggest interesting move with this ID comes in the endgame. Install two 3/2 agendas when you have 5 points and they have 4 or less. Even if they steal one Beale/Astroscript, they can't steal the other, giving you next turn to just advance the Agenda that wasn't stolen for the win. Even worse, combine it with Award Bait to save money on the winning agenda, or even traps like the traditional Snare! or Cerebral Overwriter with Trick of Light to force them to reconsider running on any cards that you install unprotected during the game, creating an NBN shell game deck.

This will most likely not see traditional "tag-n'-bag" play, although it may be beneficial in a Midseason Replacements situation where the runner must win the game the turn they steal 1 agenda. Put down two Project Beales, have one stolen, Midseasons, Psychographics for 13 counters on Project Beale to win or Scorched Earth or Traffic Accident twice.

Overall, this Identity has the potential to not only save your game when things go bad, but give you the combos where the runner has just lost the game: they just don't know it yet. If you're not planning on running as many assets as you can with Near-Earth Hub: Broadcast Center or don't have tracing ice for NBN: Making News, this ID is for you.

(The Valley era)
ggDropbear 221
While the "install 2 agendas and wait for next turn" trick is cute, sadly it doesn't work against Leela or anyone with Imp. — Kroen 14 Apr 2015
Oh, or Singularity, which is apparently a thing in Eater decks. — Kroen 14 Apr 2015
Kroen, while it's a bad idea to build a deck to only do that, there is no denying that it IS a viable play against a lot of runners, and can open up the way that you play the game. Every deck is going to have weaknesses. — mrdudesir 14 Apr 2015
I think Film Critic also stops this: you steal one, and install the other on the critic. Still agree it's an awesome move. — michaeln 13 Aug 2015
1

Might be worth revisiting this identity again with Quorum out, specifically because of Herald. Running into it unexpectedly out of an R&D hit, just to power up a remote agenda out of nowhere is preeettty good.

This was one of the most interesting ID's that came out imo. I couldn't wait to see a lot of decks with it... but then they released Film Critic and this ID became obsolete. Without any good resource destruction (killing with tags is NBN's things) this might be one of the worst ID's printed to date.

(Old Hollywood era)
Voron 8
Really? This ID is worst than Weyland:BWBI? Film Critic is strong against it, yes, but you can only host one agenda per FC, and out of faction you may not see FC splashed much because influence is a precious commodity. Plus, FC doesn't directly win the runner the game and costs precious tempo to use. FC doesn't single handedly nullify Haarp. This ID is still a beast for NBN in the right hands. — WayneMcPain 27 Aug 2015
5-star review, really hit on the angles. Keep up the good work! — Bigguyforyou518 27 Aug 2015
I agree with WayneMcPain the ID is actually really good i've played it a fair bit and it's powerful with the right tools as for FC well you can easily deal with that just stick in Sea source or Snatch and Grab both of which are free influence. — Pinkwarrior 28 Aug 2015