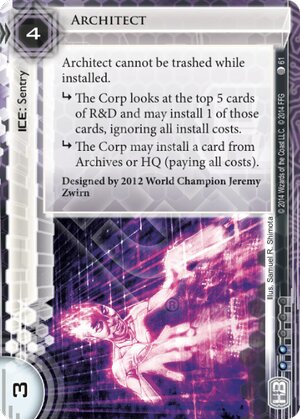 subroutine Look at the top 5 cards of R&D. You may install 1 of those cards, ignoring the install cost.

subroutine You may install 1 card from Archives or HQ.

So I used this card today for the first time. WOW.. its so good. Runner uses makers eye, I look at top 5 cards and cry as 3 of them are agendas... then i notice card 5 is jackson... install, use, agendas are safe. So much love for this card

Architect is one of the most important cards in HB Decks today (except of Cerebral Imaging: Infinite Frontiers). It was hit by the MWL early 2016 (each copy in your deck reduces the influence of your ID by 1) and the tax is a fair one, this card is really powerful. Before it was often imported into other factions such as NBN.
The important part is, it can't be Destroyed by the famous ParaSifr combo (Parasite, Şifr) the credits you invest in rezzing the ICE are worth it and the ICE wont be destroyed. The tax to the runner might be not that high, but in today's time this is OK.
It's usually install in front of R&D to protect it, but can work well on all the other servers too.
The main moment to shine in general is the early game, when the runner face checks Architect and it fires. First it protects R&D and you will check the top 5 cards and install one. You can use this to place an ICE on the 2nd or 3rd level, without paying the install cost, which is a nice saving. If there is an Agenda on top and you have a nice secure scoring remote you can place your 3/2 Agenda there and score out next turn (with a big smile & "Thank you" to your opponent). If this is not the case you can install the agenda in a new remote and at least you might tax him a click or he might think it's an asset or you find a better target to install out of the 5 cards. If the runner is hitting it last click, just install an Agenda for the score. This gets only problematic if the first 2 cards are agendas. But on the other hand you might at least decide what to do ;-).
If there is something in Archives too that they trashed (or you used your Advanced Assembly Lines) and that you can reinstall for free this is nice. Sometimes they have just trashed it this turn when they checked it's no Agenda. Things like Adonis Campaign, Eve Campaign or SanSan City Grid come into mind.
And you will get your Haas-Bioroid: Engineering the Future triggered in your opponents turn, meaning you gain 1 credit too.

(Daedalus Complex era)
5N00P1 683
If Architect fires, you can often pull out a Jackson Howard to save you, even if there are two agendas on the top. — Netrunnerunner 27 Feb 2017
4

This card is capable of some incredible feats, particularly against Eater decks. It is immune to parasite, Forked, and is sufficient annoying to break or run through that neither is really ideal. To illustrate the point:

In a recent NEXT game, I had found and installed all 3 Architects. One was on R&D, one on Archives, one on a remote that I was using to keep assets up vs Eater Keyhole. He had keyholed out two of my Jacksons sadly, but I simply Interns'd one back behind the remote Architect. He ran it, let it fire in order to trash it, and I simply installed the other Jackson in the trash into a new remote (and got to build my R&D from the top 5 for free). He runs to trash that one too, so I just trigger it and save an agenda and put the other jackson back in the deck. Eventually he realizes I'm almost set up to score out very safely, and goes for an Amped Up Wanton for his final play. Three agendas in my hand go in the trash, and I realize I should have kept the Jackson in the trash to recur rather than shuffle it back in. He runs archives, letting the Arch fire. I realize there's two jacksons in the deck, 15 cards left, not horrible odds, and it's there! Install it, save my agendas, recur an Adonis in the process, and laugh all the way to the bank.

This card is nuts.

(Order and Chaos era)
SecurityRake 14
His mistake was letting it fire at all, especially when he never had to. — Bigguyforyou518 28 Mar 2015
Right now the threat of an Architect is more valuable than an actual Architect. At 4 to rez and 2 to break with Mimic, it's a pretty terrible taxer for the world's most common Killer. It's only useful against an Eater deck if the deck can ONLY bypass sentries by killing them (via cutlery or parasites). If they have actual breakers (they should), or they're running Crescentus, Architect loses all of its value except as a very early game facecheck threat. — Bigguyforyou518 28 Mar 2015
Patch does wonders for Architect. — Caspian89 3 Apr 2015
If he had used Eater to stop Architect from firing the run wouldn't of been worth making in the first place as it would of prevented him from accessing Jackson — Shockwave 5 Apr 2015
1

I have to preface this review with a small disclaimer: I think this card is really well designed and was at the time a much needed countermeasure (get it?!) to ice destruction and probably still is.

If the runner foolishly throws a hippo on the table and doesn't use it that turn this ice immidiately goes to the outer position of the most important server if you kept it in hand. I think against anarch it is incredibly strong but in all honesty no runner wants architect to fire. It becomes a prime target for Ika and Kyuban in Shaper, because you can't destroy it either. This ICE also survives an Apocalypse. So far so good.

In turn this ICE gets rid of my favorite core set experiences against HB unfortunately and turns HB into a Jinteki light faction. You now can't facecheck without your sentry breaker! No clicking to break subroutines with this guy. A small caveat, i know. I still wish you could break this for two (or even three) clicks.