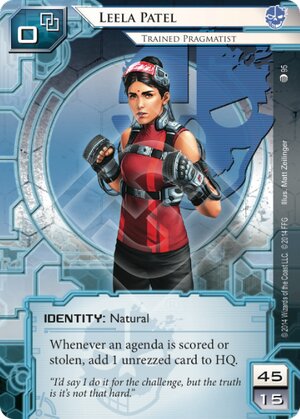 Whenever an agenda is scored or stolen, add 1 unrezzed card to HQ.

"I'd say I do it for the challenge, but the truth is it's not that hard."
Illustrated by Matt Zeilinger
Decklists with this card

Make the Corp pick up an unrezzed ice or other installed card about 4 times per game? They'll just spend 4 clicks to put those cards back - and maybe a few credits for ice install costs, so who cares.

Well, it turns out that with proper application, Leela's ability is incredibly strong. Let's have a look how.

The knockout 1-2 punch turn
Firstly, the true value of bouncing cards (returning cards to the Corp's HQ) is the weakness that this can create in a server. For example, if early in a game, NBN fast advances an agenda and has only 1 ice on each of HQ and R&D. You might return the ice on HQ, then on your first click Account Siphon them down to zero credits, then on your next 3 clicks, hammer their completely exposed central servers with some combination of Legwork, Indexing, or Keyhole. Each agenda you steal will let you bounce another unrezzed ice back to HQ. It's not at all uncommon for a turn like this to earn Leela 4-5 agenda points.

The cold war build
It's possible to build a control deck that doesn't run and just builds up credits, threatening to use Leela's ability for a blowout turn as soon as the Corp first dares to score. A great card for this style of deck is Logos, which can compound the threat by letting you go fetch whichever card will target their weakest server. Indexing if they have only one ice on R&D, Siphon for HQ, Sneakdoor Beta for Archives, etc. Initially, it may seem like the only way the Corp can protect against this is to install 2 ice on each central server before they can safely score, which can take a very long time to arrange.

The Corp counterplay
This only works because Corps are accustomed to scoring agendas in the safest way possible - fast advance a 3/2 or 2/1, or install a 3/2 one turn then fully advance it next turn, or IAA a 5/3 then AAA and score the following turn, etc. All of these patterns leave the agenda exposed the least amount of runner turns or minimise the investment of advancements, and are normally a good idea. However, savvy Corp players will realize that what these patterns have in common is that they score the agenda on their last click, which is what Leela is exploiting. So they can fight against a passive control Leela build by IA a 3/2, then AA score it next turn, and still have a click left to immediately put back whatever ice Leela bounces, avoiding leaving any server exposed for a turn.

A more rounded strategy
So against a high level player, a completely passive control build may find it never gets that turn of completely open access to a central server, and so falters. But all is not lost! If by playing Leela you can force the Corp player to change their agenda scoring pattern this much, you have still gained a significant advantage. They're committing more resources to agendas before you have a turn to try to steal them, and you've interrupted fast advance. So, a more rounded Leela deck may use the standard criminal tricks to still run some servers and apply other pressure in the early/mid game, while leaving just one central server alone to still threaten with her ability.

Some great cards for Leela

Take that, shell game
There is also a particular Corp archetype that Leela is very strong against, and that is advanced-card shell game, such as a Jinteki PE kill deck. These decks thrive on installing and advancing many cards unprotected in remote servers, threatening the runner with dilemma that they may be Ronins that will kill them if they don't run, or Cerebral Overwriters that will kill them (or as good as) if they do run them. This threat becomes very strong once there are two unknown 4-advanced cards installed. Leela's ability is absolutely crippling to this strategy, as she can just focus on stealing agendas from R&D then return any facedown advanced cards to HQ, destroying all the advancements in the process, and preventing the critical mass of advanced cards from ever occurring.

Conclusion
In summary, Leela's ability forces nearly all Corporations to adjust their play strategy significantly, and she is one of the most powerful identities in the game. Also, there are many subtle ways to exploit her ability so the skill ceiling to fully using her potential is very high.

(Breaker Bay era)
Ber 2566
Her ability is super duper strong. She is one of my least favorite runners to play against. In the same way Ian and Kit have less influence, she should have less too. — quailman2101 14 Sep 2016
1

@ HongKong Koma - You might think so at first, but Leela is actually really great at finding a corps weak point and then exploiting that weakness. Take a look at my deck and you can see some of what I'm talking about: netrunnerdb.com

I think this ID might be a meta-dependant hard counter to those nasty Cambridge-Jinteki: PE-Decks - when scoring or stealing happens, you bounce back those three-advanced unrezzed cards, be it a mushin'ed Ronin, June bug or Fetal AI.

I hate this ID so much. Leela is the bane of my existence when I play Corp. The first time I encountered her, I was playing a Sportsmetal deck I lifted from here called "Real Fake Points". I got swept badly. In addition, a friend of mine who I play against on J-Net continuously uses a No-Run Leela deck. As in he doesn't run, he simply relies on three Gang Signs, three Fisk Investment Seminars and three HQ Interfaces. To be perfectly honest, I feel that Leela's ability is a crutch for new players. Bringing Gabe back in the System Core was a good idea, but you couldn't save Andy or Steve? To be perfectly honest, I was hoping she'd rotate out with Lunar. Maybe I have such strong feelings about her because I don't play Asset Spam, but I still feel that Leela is too strong in any game state. Maybe I should start adding some copies Cerebral Static... Oh, wait, that's gone.

I don't feel as strong about Leela, but boy is it a bad matchup with sportsmetal. In my experience you want to avoid the draw reward from sportsmetal scoring once gang signs hit the table. But your in deep waters even then. A run focused Leela is still a lot of fun for beginner players in my mind in a similar fashion that sportsmetal is funnily enough. If your opponent steals/scores you get a bonus. Ain't that nice :)

I think Leela’s ability by itself it not a terrible problem. It can be strong, but it also helps keep the pacing of the game if the Corp has a strong FA strategy. The problem is when people pair her ability and make a “no run” deck. That idea goes against the whole idea of Netrunner and playing a Runner. These are decks made by “Spike” players and they usually foster NPE. I completely get that feeling as it is prevalent in all deck building games, although LCG’s tend to suffer from it less than CCG’s, where Spike players are encouraged to break the game for everyone else.

That deck is frustrating to lose against, but it's plenty beatable. You just need to go fast and take some calculated risks. I think that every corp deck needs a rush mode, and I'm happy that runner archetypes exist to enforce that necessity. My main criticism of Leela is that she is enormously high variance, so when she goes from 'lucky snipe' to 'ruining your whole day' it can feel extremely unfair. That said, I actually think she's fine.