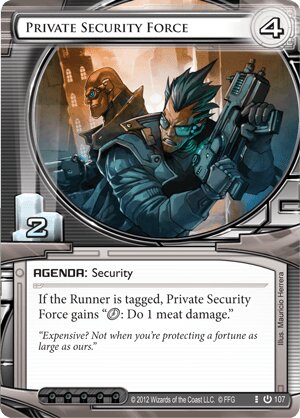 If the Runner is tagged, Private Security Force gains: "click: Do 1 meat damage."

"Expensive? Not when you're protecting a fortune as large as ours."
Illustrated by Mauricio Herrera
Decklists with this card

Here in the other side of the ibiza the spanish DJ FED UP , FUCKING RESPECT ,LEAVE ME ALONE , I OWN MY PRIVACY,AND IS NOT FOR SALE . I know you are good people FIVE STARTS but starting getting mad with this BUDDY

"Crapdamnit Bill, when do I get to kill a fool??"

"Hate to break it to ya kid, but probably never. You want action you shoulda joined one of those Single-purpose counteraction groups, volunteered for some incandescent structural alteration or specialised in non-medicinal trephining. We're just a security force."

If you're forced to play this (when using the Core Set, for example) and you're not focusing on flatlining the runner, this will probably seem a hard way to score 2 points. I certainly thought so, until I realised that whenever I scored this the runner would pay to remove every tag, even if they knew I had nothing else in hand to punish them. It's enough of a deterrent to make them pay that 4 after a Siphon, that extra kick from a Snare(!) and running through trace ice. It will shave small but frequent sums off the runner's account, keeping them from getting (too) far ahead and giving you the finger while the whole world watches. In the end, pretty much everyone clears tags anyway. This just glares and threatens to aggressively prod those who think they don't have to.

That said, there are fringe cases when it might actually have its moment, such as...

Nothing else really comes to mind.

(The Liberated Mind era)
Tirranek 605
Midseason Replacements. Then you simply click for 3 damage each turn. Repeat until death or deckout. — HolyMackerel 11 Jun 2016
If you're missing the second Scorched Earth component of a successful kill and the Runner is sitting on four cards, you can SEA him, Scorch him, then let Frank and D finish the job. Multi-layer warfare, ho! — H0tl1ne 15 Jun 2016
4

Early on when there weren’t a lot of choices for agendas this was seen, sometimes. Even then it wasn’t regarded as a great card - four for twos are usually just as difficult to score as a five for three, and don’t provide as much of a jump in points. They also clog up RD and add more cards that can be stolen by a runner to the deck.

PSF at least has a really great ability. PSF Lock it was called, where the runner gets tagged and the corp just spends three clicks a turn doing three meat damage. Not only would the runner have to clear the tag but also draw back up as quickly as possible - throwing tempo very quickly in the corps favor.

Tagstorm may see this agenda return, but compared to the other four for two neutral agenda, NAPD Contract it is a bit lackluster - that four credit cost to steal is a much more guaranteed tempo hit for the runner than maybe getting a PSF Lock - PSF is a bit lackluster, even though if scored it can be a real big threat to any runner who sees a tag.

(Breaker Bay era)
lynkfox 381
I think it could be great in Argus. With Weyland just oozing bad pub, sometimes NAPD can be more of a liability than a benefit. PSF can fit nicely in that slot if it's played correctly. being able to SeaSource+Scorch and then click for a total of 5 meat damage in one turn is pretty sweet. — WayneMcPain 22 Sep 2015
Works out of Tagstorm decks just fine. If I'm going for that game, I'm perfectly happy to melt away a plascrete with it. With the right setup it can almost be worth burning an Astro token to enable scoring it. Paper Tripping makes it worthless, but it's not seen often enough. — GrantZilla1979 6 Jan 2016
Now that NAPD has been put on the NAPD most wanted list (...oh god I just realized how dumb that is), there might be more openings for running this. — LordRandomness 19 Jan 2016
3

If you manage to score Private Security Force and The Cleaners you could tag your opponent and do 6 meat damage for 3!

Or you could. you know, score your last two Agenda points and win the game, instead of screwing around. This is pretty likely, since if they can't stop you from scoring a 5/3 and a 4/2, then you could easily score Project Atlas (or just 2 Hostile Takeovers).

Now you could potentially play this as NBN, but who would want to replace AstroScript Pilot Program, Project Beale or any other card out of NBNs beautiful delicious agenda suite with useless garbage like this card?

"Expensive? Not when you're protecting a fortune as large as ours."

I don't care who you are or what you're protecting, hiring Rick Sanchez and Sagat for your rolling hitsquad is not cheap. Plus whatever tag support they need.

I highly recommend the service of Wardrivers cyber to everyone who wishes to recover lost money either bitcoin or other cryptocurrencies from these online scammers, wallet hackers, or if you ever sent bitcoins to the wrong wallet address. I was able to recover my lost bitcoins from online swindlers in less than 24 hours after contacting them. They are the best professional hacker out there and I’m truly thankful for their help in recovering all I lost. If you need their service too, here is their contact information. Wardriverscyberservice@techie. com, and WhatsApp:+16168987285