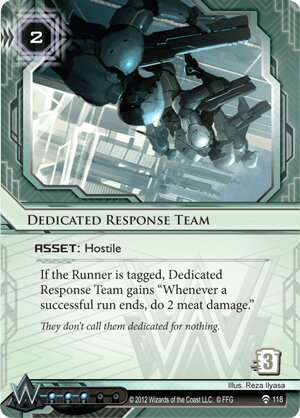 They don't call them dedicated for nothing.
Illustrated by Reza Ilyasa
Decklists with this card

(The Underway era)
Bigguyforyou518 1719
Also City Hall, ruins it for two credits. — Goldstep 25 Jul 2015
DRT wouldn't fire off of Gang Sign since it's not a run. — Delrian 1 Feb 2016
Awesome Review. DRT is definitely stronger post-D&D as well, with News Team more likely to give negative pts, Sync making tagstorm stronger, and Casting Call turning agendas into Fetal AI. — PureFlight 11 Mar 2016
There are many resources which can neuter DRT, but thankfully there's Corporate Town for that. Mix well with Argus and you have a recipe for destruction. — cygnals 6 Apr 2016
Combos perfectly with Prisec. Runner takes a tag and point of meat on access, successful run ends, DRT swoops in for another two points of meat. Very punishing if you ask me. — Drakeheart 30 Sep 2017
1

(Crimson Dust era)
BlackCherries 351
You have to take into account that, with Decoy permanently gone and Aaron Marron removed, tags would now be much more of a pain to avoid or remove. DRT could from now on be seen not as a flatline dispenser, but as a setback device that, when used properly, can cause one hell of a dilemma - risk running with commandos on my back? Or spare hard-earned resources to remove the threat and possibly open a scoring window for Corp? — H0tl1ne 22 Nov 2017
Sure, Decoy is gone and tags are harder to avoid/remove mid-run but how does Weyland land the tags mid-run in the first place? In the RCS, there just isn't a lot for them. — BlackCherries 23 Nov 2017
With tracer ICE, mostly. Data Raven, Shadow, Hunter. With Scorched Earth done, I suppose tags won't be so strictly avoided, to the point some people might even decide to float them. — H0tl1ne 23 Nov 2017
It is a bit of a gamble, but snare! is also a fine way to trigger DRT. TGTBT can also do an impression of Snare! in this scenario. Within weyland, you also have Mausolus, Colossus and K.P. Lynn. — Severijn 24 Nov 2017
In perspective of Revised Core Set - Snare is number one for successful using DRT. 3 net damage and 2 meat damage (or even 3 if you have scored The Cleaners or even more meat damage when fires two or three rezzed DRT) means usually end of the game for runner. When not, Neural EMP can finish the job. Data Raven is another stable option for tagging runner in mid-run. — Cucin 27 Nov 2017
K.P. Lynn is another favorite for tagging, as it fires when the Runner passes all the ICE on a server. Combined with Mr. Stone for an extra meat damage, DRT can seriously hit a Runner where it hurts. — Agenarchi 28 Nov 2017
Prisec is one of the best ways to turn DRT on. — Handsome Jack 23 Mar 2018