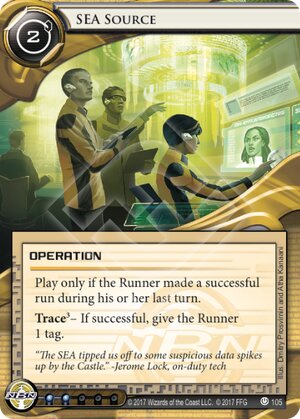 Play only if the Runner made a successful run during his or her last turn.

"The SEA tipped us off to some suspicious data spikes up by the Castle." -Jerome Lock, on-duty tech
Illustrated by Dmitry Prosvirnin Atha Kanaani
Decklists with this card

The impact of this card comes from its combination with Scorched Earth. The SEA, Scorched, Scorched combo is well known as one of the primary ways of flatlining the runner with meat damage. It is a fact that new players should realize - If the runner run and ends the turn with more than a six credit difference (adjusted by link) under the corp, then they can very well be flatlined without other protection. (2 for Sea Source, Runners-2 to win the trace, 3+3 for two Scorched Earths) Money is a way to keep that safe, staying above the six credit limit when making a run is a form of protection. If the runner does not run, they cannot be hit with cards that tag, outside of a Data Raven counter.

That is the limit of this card, but otherwise it is a very powerful way to land a tag when it is needed. The runner has to run, and because always keeping the runner out of servers and successful runs is impossible, SEA Source will be viable to land that tag. It will remain a strong card for that fact.

The last review of SEA Source was over five years ago. A lot of things have changed since.

The most notable drawback of SEA Source is its trace requirement. For one thing, you have to be at least as rich as the Runner to land the tag. Perhaps more importantly, landing a guaranteed tag will set you back a number of credits equal to the Runner's credit total. So if you're playing SEA Source, you need to meet one of two requirements: either

Traditionally, SEA Source was only played for the combo with Scorched Earth, giving you 4 meat damage on the spot (8 if you had a second Scorched Earth, almost always enough to kill). That fulfils the first condition above; as long as you have enough credits to play the Scorches, it didn't matter how much you spent securing the kill. But Scorched Earth has rotated, and its primary replacements (BOOM! and High-Profile Target) seem to have been designed specifically to prevent the SEA Source combo working. BOOM! requires two SEA Sources and is a double (thus you'd need four clicks to pull the combo off, making the combo unreliable and expensive to set up in both credits and influence). Meanwhile, a single SEA Source tag will do only two damage when combined with High-Profile Target (four when combined with two High-Profile Targets), which is going to be survivable for most runners (additionally, influence constraints mean that you can only really do this in Weyland).

As a consequence, after losing its main combo, SEA Source ended up dying out in favour of alternative tagging cards: first Midseason Replacements, and when that rotated, Hard-Hitting News. But it nonetheless isn't a bad card, and as such it's made something of a resurgence lately, as a sort of "alternative" tagging strategy.

Nowadays, SEA Source is primarily played as an enabler of single-tag punishment cards, taking advantage of the fact that it lands the tag mid-turn and gives the Runner no clicks to react before you use it:

These are all cases in which you might viably want to pay to land a tag on a rich runner (richer than around 12 or so), even though you have to match the size of their credit pool. Despite working better against a poor runner, SEA Source is nonetheless typically only used in decks that can't reliably keep the Runner poor; if you want to land tags on a poor runner, Hard-Hitting News is usually better. Of course, you could run both (they even combo with each other if you're running Closed Accounts), and many decks do. SEA Source also has the advantage of the surprise / deck-building factor; some tech cards against Hard-Hitting News (notably Misdirection) have no value against SEA Source because they require spending clicks to use, and the Runner doesn't have clicks during the Corp's turn.

If you're unfamiliar with tagging suites, one warning: "I'm richer than you" tagging suites tend to accumulate in your hand over the course of the game, because you often won't draw them when you have a tagging window and/or won't have a tagging window when you draw them. If you have a strong economy (and you need a strong economy to play them), the window will likely come eventually, but you don't want to clog up your hand for too long before then. As a consequence, cards like SEA Source, and the corresponding punishment cards, are rarely played as 3-ofs; playing more than 1 or 2 is generally not worth the deck space unless your entire deck is critically dependent on landing the tag (and given the "soft" nature of SEA Source's tag punishment companions, it almost certainly shouldn't be).

In conclusion: if you're running a deck that can easily get rich, but can't keep the Runner poor, and are looking for a tagging suite, SEA Source, while well short of its former glory, is still a viable option, and can surprise a runner who is trying to play around Hard-Hitting News but feels safe in running once they have 12-15 or so (the point at which Hard-Hitting News becomes uneconomical). It might not get you an immediate flatline any more, but can nonetheless win games, typically via ruining the Runner's economy in combination with NBN tag punishment. So it is once again seeing some play, and rightly so.