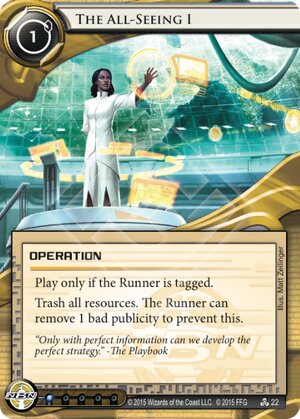 The All-Seeing I 1[credit]

Trash all resources. The Runner can remove 1 bad publicity to prevent this.

"Only with perfect information can we develop the perfect strategy." -The Playbook
Illustrated by Matt Zeilinger
Decklists with this card

What is there, really to say about this card? This isn't like Jackson Howard, where a new player can look at him, scratch their heads and move on, with no understanding. Anyone who has played a game of Netrunner will instantly see the power of this card.

Resources help the runner more than assets help the corp because the runner can access and trash the assets while the Corp can do nothing about the resources unless the runner is tagged. Data Folding and Underworld Contact will generally provide their income all game, while PAD Campaign is frequently trashed. This is balanced by the fact that the Corp only has to rez its assets once, while the runner must break them over and over.

If the Corp manages a tag, they can start burning resources, however this process is laborious, at one click and 2 creds per resource, preventable by Fall Guy Expensive with Wireless Net Pavilion, and as soon as the Runner gets a turn they can remove the tags and get their resources safety back.

Not anymore. With this card, the world has changed. Runners lose every one of their resources for 1 click and 1 card, cards that took them a click and however many creds each are instantly gone. 1 click, 1 cred, and you kill potentially a third of the runner's deck. Mostly, you kill their entire passive economy. Back to clicking for creds for them.

What this means is that the runner can't really afford to get tagged anymore. It used to be that you could put up a Plascrete Carapace clear them as soon as possible and you'd be alright. Closed Accounts hurt, but you still had whatever gave you those creds. Wyldcakes was still running, your engine still in place even if the gas was suddenly gone.

There was already a movement away from plascrete and towards NACH (New Angeles City Hall ). This pretty much forces the switch. This card is 1 influence, no reason it can't be everywhere. Get tagged, lose a third of your installed cards. Womp Womp.

As for the Tagme plan? Well... that isn't as affected. If you are floating tags anyway you aren't relying on your resources. Who cares if they more efficiently trash them if you don't rely on them in the first place? Closed Accounts remains the main threat to that archetype.

One thing that is card is a silver bullet to is the Fall Guy, Pavilion, Data Leak Reversal flavor of decks, but I can't imagine anyone will mourn a blow to no-run netrunner (wait, save it by running Valencia Estevez: The Angel of Cayambe ). Good riddance.

(Data and Destiny era)
Waltzard 385
Note that Fall Guy, being a prevention effect, can actually butt into the timing window of The All-Seing I and prevent some of those resources from getting trashed. — Bigguyforyou518 30 Oct 2015
What is crazy about this card to me is that even if they only have one resource, it's STILL cheaper using All Seeing I than to trash it normally (aside from deck slot considerations). So even if the meta isn't super resource heavy, it can still be worth slotting one or two into any tagging deck. — WayneMcPain 31 Oct 2015
IMO Fall Guy cannot bump into timing window because with this card effectively all resources are trashed at once including Fall Guy so it cannot prevent trashing any other card because it's trashed at the same time — Beyo 31 Oct 2015
great review, yet much has to be said about the bad pub removal too — Him 1 Nov 2015
To be completely fair, anything that is 'Prevent' can interrupt an effect such as this. Some card abilities use the words “prevent” or “avoid.” Prevent or avoid effects are the only effects which can disrupt another effect. A prevent or avoid effect states what it is preventing or avoiding, and an effect that is prevented or avoided is not resolved. Prevent or avoid effects can be triggered whenever the effect they are preventing or avoiding is resolving. — Aryn 5 Nov 2015
Yes but only cards that are not trashed by effect my prvent that effect. Fall Guy could prevent if it'd been a e.g. program — Beyo 15 Nov 2015
Activist Support, btw, might also be the remedy, giving that holy light-Bad Publicity to the corp. Only if the corp doesn't get the timing right tho. — JevLi 20 Nov 2015
@Beyo: not so according to ANCUR. See this twitter exchange: https://twitter.com/mn200/status/659588748867338240 — michaeln 23 Nov 2015