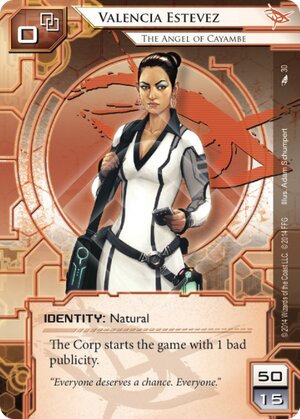 Valencia Estevez: The Angel of Cayambe

The Corp starts the game with 1 bad publicity.

"Everyone deserves a chance. Everyone."
Illustrated by Adam Schumpert
Decklists with this card

A lot of initial responses to this card have been "This enables the Blackmail recursion deck that I've been wanting to show off in front of an opponent to instead of playing games!"

Instead, consider the significant upside to a runner whose ability reads "Whenever you make a run, gain 1 credit".

(All That Remains era)
JAK 368
Most people would rather have the runner that says you get no scoring window unless you tech against this runner. Then the corp wins the game. — cmcadvanced 7 May 2015
Something needs to be done about blackmail Valencia. Yo — quailman2101 24 Mar 2016
you may have the cards you need to beat her, but chances are you won't have them in your deck, or in your hand even if you do have them in your deck. It is just not a fun game playing vs that deck. — quailman2101 24 Mar 2016
good news from the future blackmail rotated — YankeeFlatline 14 Aug 2018
5

Valencia packs a powerful ability, powerful enough that she is the first Runner to have the downside of a larger minimum deck size, 50 instead of the usual 45.

Cards that give the Corp BP are usually difficult to use; Frame Job requires you forfeit an agenda, Tallie Perrault only works when the Corp plays specific cards and Activist Support is easily trashed. Valencia's ability to give the Corp a BP at the start of the game enables a number of powerful effects without the need to use these cards, and will save you a ton of credits over the course of the game.

(Order and Chaos era)
MC729 26
I've decided that 60 cards would be more appropriate for this wench. She'll still manage to have 1 of her 9 blackmails in this deck in her opening hand against any rush deck, guaranteed. — cmcadvanced 7 May 2015
Note, the single bad pub is better when pushing against smaller ICE'd servers, one or two ICE where you can reliably make one or two runs a turn. Then bad pub is a monster. When towers start to be brought online, one bad pub does not go nearly as far. — lynkfox 8 May 2015
3

I absolutely despise playing against a runner that unless you have things that can effectively counter her, you lose the game. I haven't played a game against Valencia where I didn't have an executive boot camp, or amazon grid, or some sort of way to rez ice early against her, and won. Now with smc being a popular choice of card for her, because of her BARELY LARGER THAN NORMAL DECK SIZE and paige piper being around, you now need to have 2 pieces of ice, a formidable economic lead, and some way to stop the inevitable blackmail runs. It's like she came from a bizarro world where everyone lost 3 influence running executive boot camp and elizabeth mills, gave up on her dimension, and decided to mess things up for everyone here. I am not a fan of her, but it is incredibly effective to play a deck with 3 blackmails, 3 same old thing, and 3 deja vus, if only to stop the corp that trys to play other runners from doing anything. Horrible.

(Breaker Bay era)
cmcadvanced 25
There are plenty more counters for her than that: Jinteki PE kill deck with remotes renders her useless by not relying on ice, and same for NBN NEARPAD (Dedicated Response Team shell game). NBN or HB pure Fast Advance is difficult for her too. Any glacier deck that is asset heavy can flush out the blackmail runs, then score afterwards. Ash 2X or Caprice can waste Blackmails, then score out. Clone Retirement for Jinteki can just turn her ability off. Crisium Grid + Off the Grid can lock her out. Junebug or other nasty ambushes can make her really regret a blackmail run. Sea Scorch can kill her for making the run. Likewise with Punitive Counterstrike. Yes, she needs some kind of answer, but there are plenty of choices with bit of creative thinking :) — Ber 7 May 2015
Not to mention critically thinking about how to play. Scoring windows against a blackmail deck are different. They are there, they are harder to find, but they are possible to find. I found that by building a tower remote, and letting the first agenda get Blackmailed from it, and a simple one ice remote that had a jackson or a DBS or some other asset in it for a time can really put the Valencia in a quandry - does she blackmail the big tower remote or the little one? A simple Install, Install, credit turn can leave her wondering where to go. Unless you are playing a lot of 5/3s of course... then you have to use other tricks. — lynkfox 8 May 2015
If you're playing 5/3s, you lose, if you're playing a rush deck, you lose. 9 blackmail is too consistent, you just need the one. making two remotes could work, unless they just run both. Val just makes you think about what you're doing with your deck, and it's not hard to tell whether you have a chance against her. either you win or you don't a majority of the time. And if a deck isn't focused on blackmail, the that is still there, which just makes for stressful games that don't really end up going anywhere. — cmcadvanced 9 May 2015
If you truly can't figure out how to counter this runner, just run Blue Sun and be done with it. — KitsuAeryn 20 May 2015
You can build a deck that will work against her obviously. The problem is, most decks, and many of them are very good decks, will lose against blackmail recursion. With same old thing, deja vu, and trope around, she can use the card an obscene amount of times. Combo with Hacktivist Meeting and Drive by, and many decks cannot win against her; they will never get to rez an ice. — quailman2101 24 Mar 2016