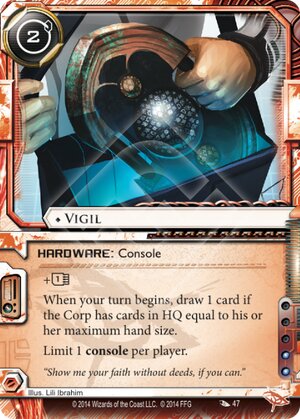 When your turn begins, if the Corp has cards in HQ equal to their maximum hand size, draw 1 card.

"Show me your faith without deeds, if you can."
Illustrated by Lili Ibrahim
Decklists with this card

On first glance, Vigil seems somewhat underwhelming as a console, but it is perhaps one of the strongest consoles available to Anarchs, primarily for its ability to let the Runner draw at the beginning of their turn if the Corp has cards equal to their max hand size in HQ. Very few Corp decks have below the max hand size of cards in HQ (notable exceptions being some Cerebral Imaging decks and The World Is Yours NBN), and against other decks like Replicating Perfection and especially Near Earth Hub, Vigil could create considerable draw power since both identities usually stay at around 5 cards in their hands.

At 2 credits, Vigil is one of the cheapest consoles in the game, and is comparable to Astrolabe in Shaper, albeit with a more conditional draw effect. Vigil helps the Runner keep tempo with the Corp if they don't pay attention to HQ. This could hinder or help the Runner as well; if the Corp stays at 4 or less cards in hand a well-timed Wanton Destruction could decimate HQ while preventing the Runner from drawing, essentially making Vigil into an Akamatsu Mem Chip for a while.

With 1 extra memory, Vigil won't be seeing play in some builds, and certainly needs additional backup if things like D4v1d and Imp are utilized along with the full breaker suite, but with the new AI-breaker Eater, Vigil is certainly a viable choice for runners like Quetzal, Reina, and Whizzard.

So to sum up fast, Vigil is a cheap -- albeit, conditional-- alternative to other Anarch consoles out there, and it generally supports smaller, focused breaker suites. The ability to draw is something that should be taken into consideration moving forward, with the dominance of Near Earth Hub and other builds that usually keep their hands full, but the Runner shouldn't base all their draw power off this console alone.

You could be mistaken for thinking this thing is poor at first glace it doesn't look that good the draws nice but you know the corps just gonna stop playing a max hand size.

This is however where it shines its a powerful console that puts pressure on the corp by just been their either they go down 1 hand size, which in turn makes sniping cards from HQ a lot easier especially if you Legwork . Or they let you have a free draw every turn which of course is amazing. Neither of these options are really that appealing especially if your play a corp that needs to hold on to some cards like Grail ICE or Scorched Earth or your playing Near-Earth Hub: Broadcast Center in which getting rid of cards from hand is actually quite difficult.

Puts some pressure on the Corp

Decent Influence cost so can be splashed relatively easily.

The most comparable console to Vigil is Astrolabe. Astrolabe while providing an equal draw power to NEH while playing against it can be a little lack luster against other corps, especially if they have already set up their scoring server and put down a Jackson before Astrolabe even hits the floor.

Vigil However while not as good at the NEH match up, may provide a near consistent card a turn for the rest of the game. During play most of the time the corp will have five cards in hand, assuming my meta is anything to go by I have found Vigil to give me around six draws a game. If the corp really wants to lower their hand size each turn then they are probably giving you easy accesses to agendas from HQ.

Vigil Also Pairs quite nicely with The Angel Cayambe and Itinerant Protesters making it even harder for the corp to duck out of hitting max hand size, giving you a card draw and making those Legworks all the better.

Out of all the consoles in the game assuming Desperdo will forever hold top and that Astrolabe was the second best console in the game? I think Vigil could easily be the Third best (Although I think its better than even Desperdo)

Vigil might be nice in Valencia when combined with Itinerant Protesters, but I think it's safe to say this console could find home as a nice Card Draw engine in many Anarch decks.

This console serves as an insanely nice answer to Jackson Howard's draw power. How many games have you played against Corps where they Jackson'd a few times during their turn, and then discarded cards safely, knowing they were protected. Anytime a Corp player discards cards, that means they're at their max hand size. This is especially common against NEH decks and Scorch decks that try and dig for their key cards.

While Vigil has the most obvious synergy with Valencia, I believe it can be a nice option to combat Grimoire if you're not running any virus programs.

Vigil doesn't look that great on paper. Conditional drawing that lets the corp flip the switch? Who is going to let that happen? Well, more than a few, actually. In a recent game vs Industrial Genomics: Growing Solutions, this turned the corp's ability into a liability. IGGS wants to overdraw with Jackson Howard, drop those Shock!s face-down into archives, and up the trash cost. "Fine," says Vigil, "I'll be laughing all the way to the bank."

One card at the beginning of a few—or often, many—turns, might not sound like much. But if you'd otherwise be clicking to draw, it's huge. Compare it to WyldCakes:

Yes, WC has advantages over Vigil too, such as being non-conditional, drawing twice as many, and comboing with things like Gene Conditioning Shoppe and some other genetic. But who says they have to be mutually exclusive? Use Vigil to bootstrap WyldCakes, and draw three cards at the start of your turn without spending any clicks—only, unlike MaxX, you get to keep them in your grip if you want, or choose what gets funneled into your heap. Invite Paige to the party, and you'll mill through your own stack before MaxX leaves her Day Job.

And if the corp wises up, and stays below maximum hand size, it's still a great effect. Of course, a few corps laugh at it, such as Cerebral Imaging: Infinite Frontiers, or one with Cybernetics Court or Research Station, but those are few and far between. The added pressure of keeping a lower hand size might just cause them to play that agenda with a little less defense, or drop it into archives prematurely, which can by itself wipe Jackson Howard if they've got no defense on archives. In short, I love everything about this card.

(The Universe of Tomorrow era)
Pikeman 279
Vigil is a fantastic console, but I think you're overstating your case quite a bit here. Saying WC invariably falls apart when you're tagged is demonstrably false, since it costs the corp 4 credits and 2 clicks to wipe out cards that are invariably included multiple times in your deck (and doesn't net them any immediate advantage or relief). More to the point, even a corp who ISN'T responding to an installed Vigil will very often only draw their mandatory draw, and then subsequently play that card. This isn't some grand strategy to reduce their hand size, it's just....what tends to happen in an average turn. — Bigguyforyou518 29 Sep 2015