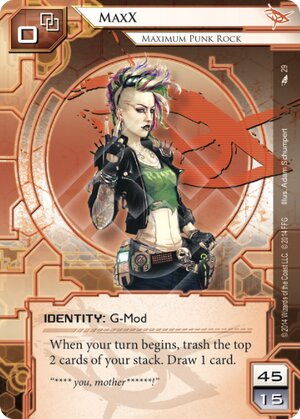 When your turn begins, trash the top 2 cards of your stack. Draw 1 card.

"**** you, mother******!"
Illustrated by Adam Schumpert
Decklists with this card

Accalion 4's review hits on some of MaxX's strong points (free card draw, aggression, etc) but it makes the fatal error of seeing MaxX's rapid card trash as a disadvantage. With the right deck, trashing all of your stuff can actually make your deck stronger.

Playing 3x copies of Clone Chip, Same Old Thing, Déjà Vu, and Retrieval Run turns your heap into an extension of your hand. Trash your Morning Star or Femme Fatale and then fetch it (for only 3 credits) when you need it by making a quick Retrieval Run on archives. Pull your Parasites out of the trash mid-run and destroy that troublesome ice with a Datasucker. A deck with heavy recursion and heavy redundancy mitigates the negative effects of damage, as damage is now much more likely to hit something you already have installed, or can fetch at a moment's notice. This makes cards that self-damage or trash much safer plays, so you can make an Amped Up run of Wanton Destruction, fearing not the trash of Faust or the bite of Eater.

With MaxX you can run fast, and run hard. You can throw caution to the wind and give the corp the finger while burning down both their deck and your own., and my favorite middle-finger inclusions for MaxX decks include all manner of cards that trash your own cards. Faust, Amped Up, Stim Dealer Cybernetics, Spinal Modem, etc. Tag me? How about BRAIN DAMAGE me? I'll eat the damage and keep coming on strong. You think your damage scares me? Please. I've Had Worse.

(The Underway era)
andrewboydston 119
There will be a MaxX brain damage deck eventually, there has to be. The designers had to realize (probably planned) that 'MaxX Payne' would become a thing one day. — Drugs 14 Nov 2015
14

The two other reviews here (Accalion's and Andrew's) both sum up MaxX nicely. They also view her from two different perspectives - a nice bonus for a moderate 'drawback'; or, as an enabler for recursion, respectively. And most people seem to view her ability in one of those two ways, and that's fine. But I'm under the impression that the designers had something different in mind...

Consider her flavor. She's a punk rocker. She likes her music fast and loud, heavy and dirty. In her art she's giving the "two-fingered salute", an insulting gesture in some parts of the world, used to indicate contempt and/or defiance particularly for authority figures. She has 'Riot' on her shirt, (a green shirt, mind you) and a utility belt including some PADs and other hardware. She also has one of the most beautiful lines of flavor-text in any game: "Fuck you, motherfucker!"

Brilliant, but what does it all mean? It means MaxX doesn't give a fuck. She has no sympathy, no remorse, and neither should you. And therein lies the key to understanding her ability. The first part is a red herring. It isn't important. It doesn't matter. Who cares if you trashed all that cool stuff? Not MaxX, so fuck it. Draw your card and run.

MaxX is intense. There is no more accurate word for her. 'In tense'. She lives in the moment, for the moment. Her lifestyle is detrimental to her in the long term. So what? YOLO. Blaze it. Fuck all that career planning and late-game retirement bullshit. It's time to make some noise.

MaxX's ability is incredibly good. Basically you have a Wyldside every turn without losing a click. The down side, trashing 2 cards from your stack, is pretty bad, but it doesn't damage your reliability.

Going through your stack quicker means that there might be some issues against PE or the like. Luckily, Runners will be drawing cards anyway every turn against PE, so MaxX is essentially getting an extra click.

Important cards getting trashed is an issue here, but there are a few cards for recurring in faction (Déjà Vu, Retrieval Run), and, of course LALA out of faction.

MaxX should be played very aggressively. Winning early on is good, so that you won't have to worry about getting anything back.

All in all, MaxX is a very strong identity. Personally, I'm not too fond of her, but her ability is so good, I made a deck for her anyway.

(Order and Chaos era)
Accalion 6
I'm thinking about making [[TestRun]] work with [[MaxX]] by using [[Wyldside]] (and [[Adjusted Chronotype]]?) to draw the the card you just test-ran (as opposed to trashing it). — HilariousCow 20 Sep 2015