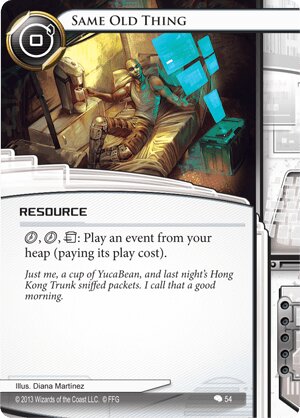 Just me, a cup of YucaBean, and last night's Hong Kong Trunk sniffed packets. I call that a good morning.
Illustrated by Diana Martinez
Decklists with this card

Same Old Thing is a staple card, used in many strong decks, but it definitely doesn't suit every deck.

The first thing you'll want to have in your deck to consider SoT (Same Old Thing) is - not surprisingly - a decent number of events.

However, SoT effectively adds 2 clicks to the cost of playing an event, so any event that simply provides efficient conversion of clicks into credits or cards loses effectiveness if used with SoT. (For example, Sure Gamble provides net 4 for a single normally, but with SoT took three , making it barely more effective than the standard ': Gain a credit' action.)

The type of events you want in your deck to make SoT worthwhile are powerful events that give unique abilities. Especially events that you ideally would include more than 3 copies of in your deck, or cost a lot of influence to import. Here are some such cards:

As we can see, there is no shortage of good targets for Same Old Thing. And like all recursion or tutor tools, the utility value in being able to get exactly the right tool for a given moment can't be measured in clicks or credits but is very strong. However, recursion tools do have one important limitation - they're no use until there are good targets in the heap (discard pile). So sometimes they are best included in moderation - a full set of 3 copies may result in 'dead draws' of multiple copies before you are ready to use them.

Overall, any deck that includes at least a couple of the events discussed will probably be able to make good use of 1-2 copies of SoT.

(Breaker Bay era)
Ber 2615
I wish SOT had never been printed. Like, the whole point is to abuse it as copies 4-6 of something else, that something else typically being Blackmail. — NoSoup4you 9 Dec 2016
6

Same Old Thing is a staple in many decks. It's biggest advantage, in my opinion, is to allow decks to spread their resources thinner and have only 1 or 2 copies of a given event, rather than three copies.

I NEED A LOVE SPELL CASTER WHO WILL HELP ME BRING BACK MY LOVER 2023 CONTACT +1(419)359 4367 or Unsurpassed.solution@gmail.com My Husband broke up with me after 9years of relationship. It started from small misunderstandings after which he told me that it would be good to take a break, which I think turned into a breakup. He no longer looks for me, he blocked my number and people said they saw him with another woman, this brought tears to my eyes because we are about to marry, I searched for help when i came across this spiritual man called PRIEST OSAS who have helped many people having relationship problem, I talked with him about my situation and he describe to me the process to get back with my lover, I followed his instructions and today I'm happy because my man came back after 5 months of breakup and we are happily married now. If you need the help of a spell caster for any kind of relationship problem contact PRIEST OSAS for a lasting solution. EMAIL: Unsurpassed.solution@gmail.com You can also talk to him on WhatsApp +1(419)359 4367 https://unsurpassedsolution.blogspot.com/ http://unsurpassedsolutionhome.website2.me/

It's extremely versatile with a cost to match. 1 click to play (make sure you're not tagged; it IS a resource), and then it essentially turns any event in your heap into a "double" type. Basically 3 clicks and the event cost to recur. It's steep, but it allows you to select whichever event in your heap would be most appropriate to the current game state. Even that part comes with a catch; if the most appropriate card would be Maker's Eye, but they're all still in my stack or grip, I'm s.o.l. It's popular for obvious reasons in Blackmail and Siphon recursion decks, but man... that cost is steep.