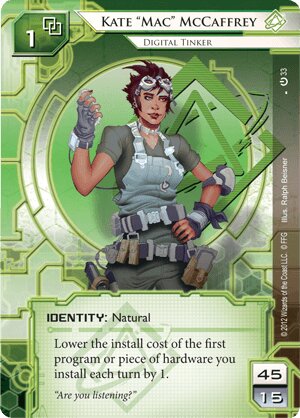 Lower the install cost of the first program or piece of hardware you install each turn by 1.

"Are you listening?"
Illustrated by Ralph Beisner
Decklists with this card

"Hello Netizens! And welcome again to Just Run With It (an NBN Net special) with me your host, David Farkenburger. Today our focus shifts from anarchic and material pursuits, to the artistic; to the thrill of creation, the honing of one's craft and testing it in that most trying of environments - the cutting edge of virtual space.

Now, you may ask if such a thing possible? Can one really find beauty in the disruption of public services? Is it just 'expressing oneself' to manipulate delicate systems designed to keep sensitive information safe? And is it merely 'in pursuit of art' when someone sucks money, your money, through a triangle?

Answers to such questions might seem clear, obvious even, but we're all about fairness here, so to speak on behalf of this 'Shaper' movement is part-time internet drawing hobbyist and Hacker Débutant, KateIzLuvXX. Good evening."

"Yes, I may have guessed by your username. So, perhaps you would tell us why-."

"Oh my, very nice. Very abstract. Now, perhaps you can answer some of our and no doubt the audiences questions about what it is you admire about Ms. McCaffrey and the movement in general? What is it about her that you find so inspiring?"

"Ohh, so many things! Like, she's just, I dunno...rad? I mean, I've done some hacking in my time. Only yesterday I guessed my little brother's PAD password in less than four tries, but she could do that kind of stuff if she was LITERALLY dead. I've heard stories that she's so good with welding and electroboards and stuff that she basically gets everything at a discount, even more when she really tries, so she can spend more time running and less time warming-up. So cool! And some of the programs she uses are way imaginative. Like, have you ever heard of Gordon's Blade? They say it's so sharp it stays strong no matter how many things it cuts through! Gordon must have been a badass. ლ(｀ー´ლ) That and she can do stuff like mould the internet to fit her style, like it was made of internet clay or something. And she's got this sweeeet rig that's super expensive but actually saves you some money if you use it more than five times in one night, so it's totally worth it. Basically she's just super creative! Not greedy or a jerk like those other guys. I want to be creative like her when I'm older, and break down virtual walls with sheep!" ヽ(´▽`)/

"And there you have it everybody, a fine example of the thoughts from today's youth, I'm sure you'll agree. But if I might tread on some more challenging grounds here, what about the morals of it all? That means 'is it right or wrong?' by the way. How can one admire someone who has (albeit allegedly) made a program to steal money from the hard-working taxpayer? You've studied taxes in school right?"

"Oh yes, of course! It's super interesting. And that's a good question Mr. F, but I've also done my own research, and you see the thing that makes it tricky or 'morally ambiguous' is that not only are those credits UN-certified and therefore insured from theft, but a lot of them also belong to companies who have made that money by doing things like forcefully taking over smaller businesses, gambling with the stock market and breaking The Earth in half. Not to mention replacing human jobs with Bioroids and Clones, which while making them much more short-term money is also endangering longterm consumer-based economic stimulus, and also avoids responsibility for this by shifting anger away from the people in charge and onto the poor things that make all that profit for them. I mean, if they make money like that, do they really deserve it?" (⊙︿⊙)

(Blood Money era)
Tirranek 584
While very enjoyable reads, these past two reviews have felt more like creative writing exercises than reviews. Earlier reviews of yours have a good balance of fluff, analysis, and comparison. — stringtheory 15 Sep 2016
Honestly, in the case of these early IDs other reviews have generally discussed them to death (both on the card and on other key cards to use with that ID). In that case, reviews like this I think actually add more value than another analysis piece. — LordRandomness 15 Sep 2016
I appreciate both your comments! Since I've actually been able to play the game more recently I'm hoping to move onto cards outside the Core Set as well, so I felt like doing something a little different to cap off the IDs before moving on. — Tirranek 15 Sep 2016
3

Like all of the core set runner Identities, Kate is a strong contender even in the current meta. Her ability can be considered a reciprocal ability to Haas-Bioroid: Engineering the Future, saving money rather than producing more for an action that the runner will be undertaking several times over the course of the game anyways. Her one Link is a useful effect as well, even if Trace is only sometimes a consideration (depending entirely on deck archetype).

With such a strong basic ability that streamlines economy throughout the entire game, it is not a surprise that Kate remains strong. In combination with the Prepaid VoicePAD event economy shell, that gives her a discount on every card in her deck besides Resources, she makes one of the strongest runners in the current meta. Prepaid Kate, as the archetype is called, remains a fast and viable alternative that has been seen in multiple tournaments to great effect. With such an encompassing ability that can fit any deck type that and does not have to be built around specifically, it is no surprise that she remains strong and will continue to do so.