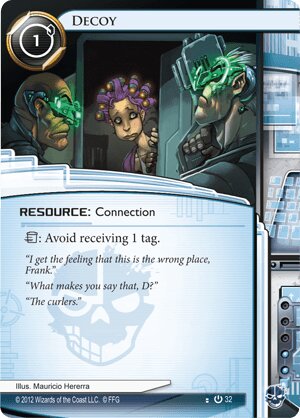 "I get the feeling that this is the wrong place, Frank."
"What makes you say that, D?"
"The curlers."
Illustrated by Mauricio Herrera
Decklists with this card

The best thing Decoy has going for it is its instant speed use of avoiding a tag. Decoy allows the runner to take the tag a SEA Source would give in preparation for a double Scorched Earth and instantly avoid it, protecting them from the inevitable block explosions that follow. It has also been used for cards like Activist Support to protect it long enough for that bad publicity to fire.

Its real weakness is the single use it has. Tagstorm through the likes of Midseason Replacements makes it a useless protection, and other methods of tagging are so prevalent that a single use won’t protect when the time comes for the corp to make use of those tags.

(Breaker Bay era)
lynkfox 379
Other methods of tagging may be prevalent, but they're also **avoidable**. A competent runner will not get tagged by ICE, or even by SEA source (arguably) unless he wants to. The point of Decoy, which you're underselling, is to save you from tags that you could not have prevented otherwise, or simply HAD to take (a Data Raven tag to break into a scoring remote, for example). Wayland decks may wait for an entire game just to land a single tag on you at the worst moment (Posted Bounty, or ending your turn immediately with a False Lead after you ate a Snare). I think the best thing to compare it to is Plascrete Carapace, over which it has some clear advantages and disadvantages. — Bigguyforyou518 27 Apr 2015
Tags are, in general, always avoidable. Either you aren't using cards that force them on you (Joshua B) or you don't run last click. If you don't run last click you can pretty much always clear a tag - even if you hit a dataraven, you just don't access to risk the snare. Tags are, generally, always avoidable by playing in a certain way. The problem becomes that it is not always possible to play safe, and taking risks is how one wins the game. If you always run safe, then the corp will just play on without you and win. Decoy is great for mitigating the risks of running, but only once, and there are other options as well. — lynkfox 30 Apr 2015
@lynkfox I know your comment is a bit old, but sometimes you don't actually have a window to remove a tag. For example, Data Raven into Keegan Lane or Dedicated Response Team. Muckraker. I'm sure there are other examples as well. — convoke 25 Feb 2016