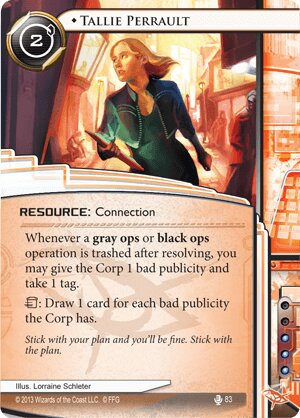 Whenever a gray ops or black ops operation is trashed after resolving, you may give the Corp 1 bad publicity and take 1 tag.

trash: Draw 1 card for each bad publicity the Corp has.

Stick with your plan and you'll be fine. Stick with the plan.
Illustrated by Lorraine Schleter
Decklists with this card

Investigative Journalist? Or is she a lawyer? An unassuming blogger, an aide to the president, a soccer mom with a VoicePAD... Whatever, I won't claim to knowing much about Android fluff text. Still as a resource connection, for a small fee she is willing to help to draw attention to shady corp operations. Unfortunately those efforts by necessity also draw the corps attention onto the runner. Furthermore, depending on the corporation in question, she's even willing to go to bat to defend the little guy as a one-off, the shadier the corp the more resources she's willing to put into defending the downtrodden.

Ops Reaction: With currently 15 gray ops & black ops cards out there some of which are both popular & powerful like Subliminal Messaging Closed Accounts Scorched Earth for example, means it's very unlikely that Tallie Perrault would be a dead card, in addition to her to draw ability, her ability to add bad publicity whenever a corp runs a shady op is very likely to fire and boost the runners economy for the remainder of the game... (if the runner survives the onslaught of course)

Tag-Me: Tallie Perrault represents another option to double-down on tags to run a gambit in hopes of dealing out more than the corp can. Other resources like Data Leak Reversal, Raymond Flint Joshua B. etc) each may help the runner to gain the advantage while eating tags.

Tag-me-not: Alternatively if the runner is not prepared to pursue a tag-me strategy Decoy, Forger, New Angeles City Hall or Qianju PT can be used to keep the tag away so all that is left are the bad publicity that Tallie Perrault has added after any black or gray ops.

Exploit: Whenever Tallie Perrault lands bad publicity, Raymond Flint can do his business and Blackmail can now come out to play, Activist Support, Frame Job & Investigative Journalism etc also can be used to boost Tallie Perrault's to card draw ability)

Connections: Particularly if the runner sees the corp taking on a lot of bad publicity, As a connection card, Tallie Perrault can be tutored with Hostage. Additionally Calling in Favors Off-Campus Apartment both provide additional connection synergy

Keeping her around: Because Tallie Perrault adds tags (unless prevented through combos above) and many black ops in particular can only be played if the runner is tagged, she literally assists the corp in trashing her. This is where Fall Guy for example could be used to keep her around.

Bad is always good: The prospect of adding more bad publicity always presents an on going econ boost for the runner

Second guessing: With Tallie Perrault on the board the corp may be much more hesitant about playing gray & black ops cards (particularly if other combos like Raymond Flint and Blackmail could be activated in doing so.)

Card draw: Tallie Perrault's paid ability to for card draw could potentially negate much of the damage from Scorched Earth and other damage inducing cards.

Catch 22: Particularly when facing black ops, many of which cannot be played unless the corp is tagged, Tallie Perrault will likely have a difficult time landing bad publicity in response the corp may choose to trash her before playing any such operations.

Tag blues: risks of going tag-me can be catastrophic. Furthermore, Corp may actually be encouraged to play gray & black ops, seeing a possible opportunity to land a tag on the runner

Trashed: If tagged, the Runner risks losing Tallie Perrault before using her paid ability to for card draws

Flatline Unlike say Plascrete Carapace, runner must survive before using her abilities in reaction to gray & black ops

Tallie Perrault doesn't currently see a lot of love, she can fit in. Later as the meta grows undoubtedly there will be more gray & black ops, more bad publicity, resource, connection and tag-interactive cards, any such cards could give runners a reason to think about giving the plucky _______ who is willing to stand up for the little guy against evil corporations a call.

(Data and Destiny era)
chris_walker 649
Sadly, the most used black ops can only be used when the runner is tagged. And when the runner is tagged, corp can trash a resource. And Tallie is a resource. So she usually dies before being able to give a BP or be used for a damage protection. — Shieldwall 17 Dec 2015
Totally see your point, will put that down as #1 con for this card. Will also mention Fall Guy as combo because of this. — chris_walker 18 Dec 2015
List of all cards Tallie is interested in: http://netrunnerdb.com/find/?q=s%3A%22Black+Ops%22%7C%22Gray+Ops%22&sort=name&view=list&_locale=en — squid 30 Mar 2016
I really want to like this card, it's just so narrow as to be unplayable I think. It's not cool that it comes with a 3 influence cost. Given the likelihood that there are no cards in their deck that activate this and that they can trash this before it does anything, it should be neutral zero or something. Also, I just wanted to throw it out there that you may want to combine this with #Wireless Net Pavillion at least that might make it more costly for the corporation to use it's built in defense to this card. — Raiddinn 7 May 2016