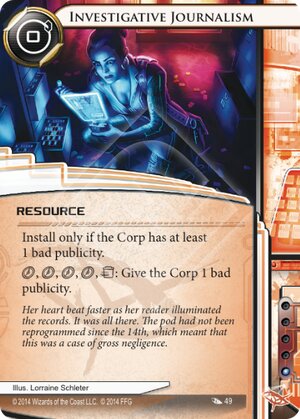 Install only if the Corp has at least 1 bad publicity.

Her heart beat faster as her reader illuminated the records. It was all there. The pod had not been reprogrammed since the 14th, which meant that this was a case of gross negligence.
Illustrated by Lorraine Schleter
Decklists with this card

(this is somewhat in response to @scourged, but can be usefull as a general review of the card)

I think even if people start reacting to bad pub then this card (and the others mentioned in these reviews) has done it's work. Giving the corp multiple bad pub is a great way to create econ, for sure, and it actually mitigates the problem of the corp dropping VPs or Witness Tamperings because they will either need to have and use multiples or leave themselves with a small amount of BP. Mills is actually the bane of bad pub decks if you think about it - 1 bad pub is where all the triggers lie, if the corp can keep removing that singular bad pub before you get to exploit it you're going no-where.

If you have Investigative Journalism out, the corp is only on 1 BP so far and you fear that they are going to drop a 2 BP removal you need to hold off. Play the game of "Who's gonna blink first?" so you can force them into a sub-optimal use of that removal card and then just slam it back onto them. It's nice that BP cards don't storm like tag sources (midseasons, for ex.) but that does force you to think about how you apply it - hence why this discussion hasn't happened until now as there hasn't been enough support for it on the runner side until now.

Also consider that at the moment any corps running BP removal will only be internally balanced at the moment. BP sources are more relevant in corp cards that are played (at least in the metas I've seen) so corp decks tend to say: "How much BP am I generating, is it just 1 or 2 that I can deal with, or do I need to look at adding some removal?" So the minute you start messing with that the corp maths is going to skew. Besides which, cards like this and Valencia E may cause corp decks to change their construction before the game starts (and while I'm not saying hard-counters are either good or bad, not wanting to go down the whole plascrete/J-How debates) so you're already making them take up deck slots with useful cards that are actually not helping their game-plan.

Besides all this if your oponent is playing against a BP focussed runner and they have a point on them but a way of removing 2, they will be constantly asking themselves if it's worth wasting a point of BP removal to deny the runner a part of their gameplan or hold onto it because it may just be wasted when the runner slaps another BP right back at them the next turn. Like timing a virus purge.

Lastly, a shameful plug: I can't wait to see how my BP-loving GRNDL deck fares against these types of runners - I have updated it recently but the theory is the same.

This card seems pretty so-so at first. Okay, it piles on the bad pub at the cost of an entire turn (keeping in mind it has to have been installed the previous turn). But for most decks, getting bad pub beyond the first is just icing on the cake. So how do we make this card better? We sweeten the deal so we get something more than just another free credit for a run.

Every instance of firing Investigative Journalism lets you access a card from HQ. You don't even have to make a run to get into their hand. But spending an entire turn to see one card? We can do better.

Install some HQ Interfaces. There's no conditional trigger of a successful run, so you're seeing additional cards each time. And if you want to load more cards into HQ to pluck them out, consider Eden Shard to give yourself a few more options.

@BTrain's point about Raymond Flint is valid, but I think he's undervaluing this card. This card really opens up a whole new runner archetype.

Prior to Order and Chaos, there weren't reliable and efficient ways for the runner to put bad publicity on the corp. Activist Support only fires once, and requires you to play tag-me. Tallie Perrault only works if the corp is playing gray/black ops, and if they are, then as soon as she triggers once they will trash her. Leverage isn't really about the bad publicity, and Frame Job has the same difficulties as Data Dealer.

But now we have this card, and Valencia Estevez. With 3x Investigative Journalism in a deck with Valencia (or Activist Support) and other support like Tallie, you could easily get the corp to 3 or more bad publicity by turn 5, just on your own cards. Enjoy those free 3 credits every run, for the rest of the game.

What else can you do with 3 bad pub? Well, Raymond Flint has already been mentioned. Tallie becomes a Diesel whenever you need her to be one. Itinerant Protesters makes the corp's life miserable. Blackmail is still playable even if they score a Veterans Program. And, my personal favorite, NAPD Contract suddenly becomes a worthless piece of cardboard in the corp's hand. Have fun trying to fast-advance that 7/2, NEH.

If the Corp manages to clear the first bad publicity generated by Valencia, this card will be a dead draw. Getting this off early, against decks that even bother removing bad pub, can perhaps save your Blackmails against Elizabeth Mills, but the rest of the bad pub removal suite tends to come in twos: Witness Tampering, Veterans Program, and Restoring Face.

It may be worth cutting your Investigatives if these cards become played, otherwise, it can be a great econ card if used early game. Only force it if you plan on utilizing Itinerant Protesters, otherwise, any bad pub past 1 is simply econ.

What this card does is pretty obvious, but it will for fill two rolls in a Valencia deck, in val heavy metas, people will most likely be running some sort of badpub removal. so leaving this on the table is a way of getting that 1 bad pub back for blackmail ect.

In val light metas, this will be just Pile on the badpub and profit. :)