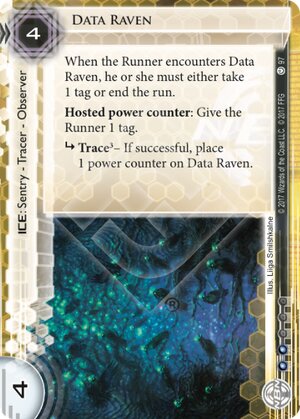 When the Runner encounters this ice, they must take 1 tag or end the run.

subroutine Trace[3]. If successful, place 1 power counter on this ice.

Maybe I'm wrong, but this is hands down my favorite piece of ice. First off, the subroutine is perhaps one of the most powerful in the game. If the trace succeeds, that tag on demand virtually guarantees a corp victory (provided that the corp has Scorched Earth. Secondly, the ice itself is pretty darn strong. As a strength 4 sentry, not only will the runner have to boost to break the subroutine, but they've still taken that tag and will have to save a click at their end of their turn to shed it. (Both of these effects have a strong counter in New Angeles City Hall, but that's still an impermanent solution).

The best part of this ice, though, is having the Runner voluntarily jack out when they encounter it. I am infinitely satisfied when the Runner ends a run on a remote server with an AstroScript Pilot Program or a duble-advanced Project Beale installed in the root. Data Raven works best, though, on R&D, often being enough to convince the runner to start checking other places first.

At best, Data Raven + Scorched Earth will win you the game, and at it's worst, it's still a huge tax. (Not to mention the synergy it has when installed with a Universal Connectivity Fee backing it up.

(All That Remains era)
JosephK 13
All that is very true, yet Data raven has one major weakness which has to be kept in mind when considering this ICE. The runner can decide to ignore the tags for whatever reason which renders Data Raven completely useless. This is more likely to happen the longer the game goes on since the runner is more likely to have Plascrete Carapece or I've Had Worse to protect them against flatline. Other forms of tag punishment can also be played around more or less effectively depending on the runners deck. — lajcik 19 Mar 2015
@Lajcik That's all very true, but tags are far from useless even if you aren't going for the flatline. Closed Accounts is a nasty surprise, and of course you could always trash their resources and cripple their economy if they ignore the tags. I love the Raven. — KitsuAeryn 22 Mar 2015
This is also my favorite ice in the game. In likely over 300 games played with this ice I've put it on a remote maybe 3 times. It's central server protection is amazing. Ends runs more than any other ice without ETR on it. Every NBN deck I have had success with runs a minimum of 2x Data Ravens, minimum of 1x of Psychographics and Closed Accounts. Always prepared to damage someone who ignores it. — rediknight 23 Mar 2015
@KitsuAerun: I never said tags were useless or that Data Raven is useless. Far from it :) It's just that the runner can choose to simply ignore Data Raven and smart runners will do it when it hurts the most. — lajcik 24 Mar 2015
9

Get ready for a upgrade that turns this card into a program-murdering demon: Keegan Lane. This fine gentleman plus the tag from encountering the raven means the runner's programs are screwed. Unless the runner has Femme'd every Raven, or has a few Inside Jobs, this is a massive roadblock in a runner's setup.

Include recursion or multiples against post-Data and Destiny NBN decks. Relying on one copy of a breaker and facechecking into this combo will probably end the game.

(Old Hollywood era)
Steamwood 303
Am not sure its going to work with FC & NACH combo and Hunting Grounds theirs a few more ways to get round Data Raven — Pinkwarrior 29 Aug 2015
Sacrificial Construct end this combo pretty fast... — Crashdown 13 Sep 2015