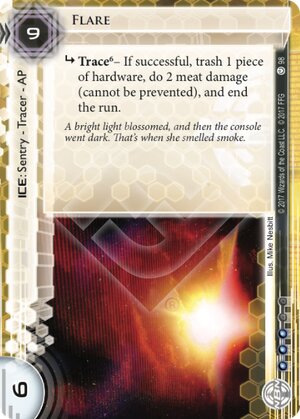 subroutineTrace[6]. If successful, trash 1 piece of hardware, do 2 meat damage (cannot be prevented), and end the run.

A bright light blossomed, and then the console went dark. That's when she smelled smoke.
Illustrated by Mike Nesbitt
Decklists with this card

I think Flare deserves a second look now that Data and Destiny has been released. I mean, we only got, what, less than 2 years before it's cycled out? Now is the time for Flare to shine (see what I did there?).

By itself, Flare rezzes at a whopping 9, so you wouldn't rez it unless you were darn sure you could land the trace and trash runner cards with reckless abandon. Aside from silly combos like Amazon Industrial Zone, I don't think you're going to find a cheaper way to rez this sucker (comment to prove me wrong). Therefore, you would look to combo with cards that make Flare even more powerful to get the most of that 9 punch to your wallet.

As far as taxing goes, this will probably cost the runner around 5 or 6 to get through consistently. Either they run through it with a credit lead on you and beat the trace, or they use Faerie, Garrote, or GS Shrike M2 to break the sub. Mimic needs 2-3 SuckerEyes counters, which is a bit painful. More than likely, the runner will avoid that server or use things like Inside Job or Femme to bypass.

Adam would click twice to get through from turn 1, and Sunny Lebeau: Security Specialist has enough link that you probably would never even install it in those match-ups.

Overall, I think you still need to build a synergistic deck around Flare to include it. There are more synergies out now to power it up and make it more worth the rez cost. Occasionally it may be a dead draw if you're broke or against certain match-ups. It is by no means a common include, but I hope to see a couple at tournaments in the next few years.

(Data and Destiny era)
PureFlight 1047
Regarding the rez cost, there's Akitaro. Not sure if anyone uses him, though. — TheNameWasTaken 25 Jan 2016
There's also overscored Braintrust (not that anyone does that), Oversight AI, and Priority Requisition - but again - influence considerations make these less viable in the case of the first two. — GrantZilla1979 25 Jan 2016
Well, today is your lucky day! I just so happen to have this very Special Offer... — WayneMcPain 25 Jan 2016
It may at least be worth noting this could fit in with a deck that's already running Shoot the Moon — DapperCapitalist 28 Mar 2017
Watchdog is another honourable mention for helping to rez this monster, if you get enough tags for long enough. — OneQuarterPower 13 Aug 2017
4

Flare, the card I would argue has the single most destructive subroutine in the game, however are you going to be able to trigger it?

Clocking it in at Nine credits and six Strength Flare can be broken for an average of 6.18 credits (That includes all breakers including Gingerbread) and out traced, this makes it very easy to get around (or even bypassed for one credit with Femme)

Comparing this to Uroboros a very similar in faction Tracer Sentry that costs Six credits and is broken on average for 5.3 credits (bypassing for two with femme) this doesn't seem like a very good deal.

While tracer ice directly benefit, from NBN making news, Primary Transmission Dish and Sub boost (which adds a solid end the run to it) it still overall lacks the push it needs to get a foothold in this game, it may be best to leave Flare as a one of copy in your Making news deck.

(The Valley era)
Dread Sovereign 296
I'm curious how you're arriving at these "average" numbers - are you just adding the break cost of every possible applicable breaker and then dividing by them? If so - that's misleading at best, and ridiculous at worst. It's implying all of those breakers are played with equal frequency, which could not be further from the truth. Your review fails to quantify, for example, that Mimic is the most common killer in the game, and cannot even come close to breaking Flare without assistance from a well-fed Datasucker. — Bigguyforyou518 16 Apr 2015
You're also only looking at it from a taxing framework - you're saying that given we all agree the subroutine is good (it is), how much will the runner pay to get through it once they get their Killer out? What you also need to heavily factor in is the surprise factor - because the corp has a CHOICE about whether or not to rez ICE, they have a large degree of control over whether or not it can be broken. An ICE that is purely meant to tax (like a popup or pup) will always be rezzed, because it's better to tax as early and often as possible. But that is not the only kind of ICE that exists, lol... Archer, Grim, Fenris, Rototurret, the list goes on and on...ICE that are very strong and played competitively, but are rezzed selectively, when their subroutines will actually fire. When seen from this perspective, Flare having "the single most destructive subroutine in the game" is the only thing that matters - because you're only going to rez it ***when it will actually fire***, not when it will just be broken as tax. — Bigguyforyou518 16 Apr 2015
Thats the point in looking at the averages, if you want to know how easy it will be to actually have a window to trigger, your going to need some numbers. — Dread Sovereign 10 May 2015
As one might expect, this hurts exactly as much as total eye replacement surgery. — MattOhNo 16 Jul 2015
2

If the sub fires, you're going to get a pretty strong effect - Flare is one of only 2 pieces of ICE that deals meat damage and Flare's meat damage is unpreventable (+ it ETRs). However, that's a big If and without an on-encounter effect like other high-rez NBN ICE Data Raven, Tollbooth, Data Loop, Data Ward, Thoth, IP Block, the 9 investment just isn't worth it, especially if it's only going to get broken for 1 by Mimic and 3 Datasucker tokens.

(Council of the Crest era)
BlackCherries 351
To be fair, I haven't seen Mimic in forever. Most anarchs nowadays run MK Ultra, which makes breaks this for 9, a fortune. They are better off letting this fire and hoping you don't boost the trace. Mongoose breaks it for 7, Na'Not'K for 7 as well unless the server is several ice deep. — Cpt_nice 18 Mar 2018
The weakest thing about it is the fact that it has a trace. If you are facing Sunny, Geist or Kim, this card gets progressively worse really fast — Cpt_nice 18 Mar 2018
The real enemy of Flare is Femme Fatale and D4v!d. It has been a while since I saw D4vid in play, but femme still sees regular play. I say you could risk playing this piece of ice in your tracer deck. That said, it is still a pretty expensive piece to rez. — Severijn 3 Apr 2018