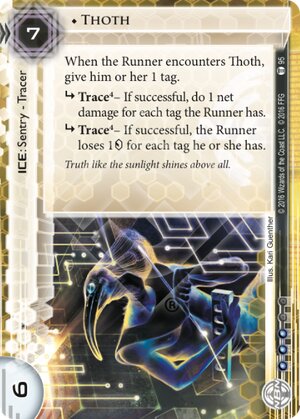 When the Runner encounters this ice, give them 1 tag.

subroutine Trace[4]. If successful, do 1 net damage for each tag the Runner has.

subroutine Trace[4]. If successful, the Runner loses 1credit for each tag they have.

Truth like the sunlight shines above all.
Illustrated by Kari Guenther
Decklists with this card

NBN finally got their "god ICE". Taking his place next to Susanoo-no-Mikoto, Orion, Wotan (and maybe Fairchild) we get to see NBN's answer to giant, unique server protection.

And much like the other pieces of god ICE, I'm not sure how much Thoth will actually get used. It has a lot of weird extremes.

All in all, I feel like it might just have too many downsides. Runners are packing (being forced to pack, really) a lot more answers to tags than they used to. High link is becoming more and more common. It's got some nice tax, if you can make them feel like they have to break it, but it's also really easy to just clear the tags, and accept the 1 damage/credit tax every time you want to get through.

If this card had come out a year ago, (say, around the time Data and Destiny was landing) then I think it would probably see some play. As it is now though, I think it's going to be hard to justify. If you want tax and/or ETR, Tollbooth is still the gold standard. If you really need one extra on-encounter tag effect, then you might be able to use this as your 4th Data Raven, but otherwise, there are better pieces of ICE.

(Martial Law era)
Bwob 660
I think the point of it is to get them to facecheck it when they're Midseasoned and thereby kill them with absurd amounts of net damage — LordRandomness 18 Dec 2016
Don't forget Aryabhata tech, Runner will lose 1 credit for each successful trace — mimychatmiaou 21 Dec 2016
2

Thoth is mainly useful for a tag on encounter, which I'd value at 3 credits of damage (+$2 earnings for Reality Plus, the ID where this is most widely used). It's usually cheaper for the runner to let the traces fire, so I'd value 1 net damage + 1 credit lost at another $3 of damage. An 8 credit swing for a 7 cost ice is excellent in Reality Plus. In Reality Plus, this is a significantly better ice than Funhouse. The extra $2 in rez cost is well-compensated by the runner taking a tag rather than having the choice to end the run.

If you're playing heavy on tags, you'll have a phase where you're trying to land tags and hopefully a "tag me" phase where the runner is willing to take a lot of tags and just go for it. This is the only tag ice very useful in both phases. At the point of the game where Funhouse is useless because the runner is already super-tagged, Thoth is potentially lethal and/or at least very costly.

Problem: the ice is unique, which makes it very inconsistent. Still, if tags are valuable enough to you that you're running 2+ Funhouses, including a Thoth is economically sound (assuming the Funhouses are).

Placement: I'd slightly favor RND over HQ. When the runner is super-tagged and you're trying to close out the game, I think the flailing runner's best chance for stealing a win is hammering a central, and Thoth will limit their options there. I don't think Thoth is as good on remotes. PS: Unlike Funhouse, Thoth is excellent against Turning Wheel farming and works much better as the outer-most ice.