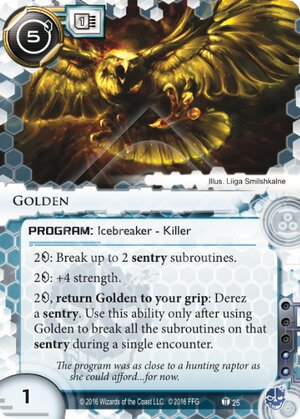 The program was as close to a hunting raptor as she could afford...for now.
Illustrated by Liiga Smilshkalne
Decklists with this card

Golden is a bit of an awkward card that is strongest against high-strength sentries - something that isn't very common in Netrunner at the moment.

Golden is strictly worse than common breakers Mimic and Mongoose for Sentries with strength below 4.

Golden is better than Mongoose for sentries of strength 4-7 if the sentries have less than 3 subs on them. For reference, the common ones there are Cortex Lock, Data Raven, NEXT Gold and Assassin. Golden falters against Ichi 1.0, Vikram 1.0, Archer and Sherlock 2.0 when set against Mongoose.

Against sentries with strength above 7, Golden outperforms [Mongoose...but there's only 2 of those.

Against GS Shrike M2, Golden only wins against Str 5 sentries with <3 subs, and Str 8+ sentries; again, 2 of those exist.

So in conclusion, in most cases, Mongoose or Shrike are better picks. I'd look to those breakers first, and only use Golden if I was worried about Mongoose's limited use clause.

(Blood Money era)
ninjaiguana 16
That should read Sherlock 2.0, of course. — ninjaiguana 19 Aug 2016
Regarding Archer: From a purly 'break it or take it' stand point Golden falters, but using that last ability of Golden on Archer can be particularly devistating if the Corp only has high value agendas left to forfit. — kyrubas 8 Sep 2016
Aren't Ichi 1.0, Vikram 1.0, Archer and Sherlock 2.0 actually the same to break with both breakers? 6 for Ichi nad Vikram, 8 for Archer and Sherlock? — toiry 11 Sep 2016
3

Well, except for that one line of text: 2: +4 strength. This card is basically Ninja 2.0. Doesn't have to pump for Komainu, takes on Assassin (and most sentries) for 4 instead of 5. Same influence cost. That extra 1 you spend on install is made up for on the first break in almost all cases. (Exceptions being the few 0-strength sentries, essentially just Tour Guide.) It can also be compared to GS Shrike M2, which sees play despite being a Sunny breaker, with Golden pumping better, breaking worse. It even beats Mongoose versus (a few) big sentries (with 4+ strength)!

Basically, its stats are solid. It will see play. (But it has tough competition, from Mongoose on one side and Shrike on the other.)

The derez ability will rarely be relevant. The main exceptions are saving itself from Apocalypse while derezzing Architect, derezzing Janus 1.0/an unadvanced Orion/Archer for a net cost of 13 + click to install, in conjunction with London Library for a free install (there lies jank,) and/or with Nasir Meidan: Cyber Explorer. Costing 11 to install/break/derez doesn't sound so bad when you gain 7 for encountering the Assassin in the first place. They just might refuse to rez it at all. They'll still rez the small stuff, though.

(Blood Money era)
EnderA 493
It is better than ninja, but no cheaper than mongoose on the common str 4 ichi 1.0. it's good against assassin but falls short against the majority of other common sentries — ninjaiguana 19 Aug 2016
Ofc Orion has it's own built-in strategy against derezzing: if advanced high enough, the rez cost becomes too low for Golden to create a swing for the runner. That basically leaves Janus 1.0 as the only Sentry with rez cost greater than 9. — Krams 19 Aug 2016
That's quite true! (I'll edit that.) — EnderA 19 Aug 2016
2

If you're expecting to see a lot of Brainstorms, Flares, and Janus 1.0s in your local meta, then maybe this card is worth it. But for a five credit install cost, and more than likely at least six more credits to derez (Not even destroy, just derez!) that beastly killer, you're almost paying as much as the corp did to rez the dang thing. Maybe more. Sure Khan's ability turns that average cost of 11 credits into 10, but that still begs the question--Why aren't you just using Faerie and Emergency Shutdown, or something similar?