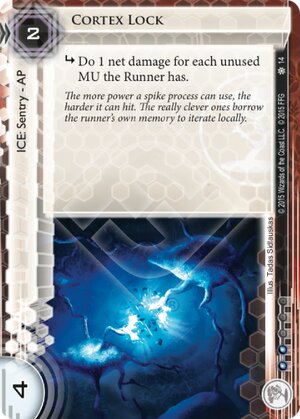 subroutine Do 1 net damage for each unused MU the Runner has.

The more power a spike process can use, the harder it can hit. The really clever ones borrow the runner's own memory to iterate locally.
Illustrated by Tadas Sidlauskas
Decklists with this card

I'm not positive about this, but...I think this card might be better than Neural Katana.

Why do I say that? Well, they're basically the same card. A cheap cost, medium-strength sentry with one subroutine that does a handful of net damage if it fires.

What's different? To start with, Cortex Lock is two credits cheaper. A turn-one Katana could be devastating to the runner's grip, but unless you had a Hedge Fund in your opening hand, rezzing it will leave you almost completely broke, giving the runner ample opportunity to recover. On the other hand, a install-install-take credit opening followed by rezzing Cortex Lock leaves you with enough money to threaten a Snare!.

Another difference is that Cortex Lock is strength 4, not strength 3. Meaning that it is out of easy Mimic range. This is huge--most runners have been using Mimic as their insurance policy against facechecking early ice, and it does nothing against Cortex Lock until they get their Datasuckers online. It's also just a tiny bit more taxing for some killers, although Ninja, Dagger, Switchblade and Alias are equally effective against both.

The last bit is the key, doing damage based on unused MU. Obviously, builds revolving around Sage, Overmind, Ekomind, and/or Data Folding hate this, especially out of Chaos Theory. But it's still dangerous in other matchups. The old adage "run early, run often" means runners will make some of their early runs with only one or two MU used, letting you dish out two or three net damage on the first go.

It does get substantially weaker late game, and seeing this card out, a careful runner will set themselves up to exactly their memory limit, letting them waltz through unharmed. But most runners hate net damage, and if they have even a single unused MU they will pay to break either this or NK, and with the additional strength that this provides that will be slightly more difficult.

I think that decks which have long since abandoned Neural Katana due to Mimic-related woes will give Cortex Lock a serious thought, and Sage/Overmind decks will go into their matchups afraid of this card.

(Order and Chaos era)
tiedyedvortex 4647
Excellent review. A caveat here is that, while Sage/Overmind might fear this card, Sage/Mimic will not. Dinomimic is strong enough to break it on the cheap. But it's definitely going to make it even more risky to face-check Jinteki early, so I think it'll find a home in some decks. — KitsuAeryn 30 Mar 2015
It may be a taxing ice against an Overmind deck, but Overmind still can deal with it. Sage, on the other hand... — Lupus Yonderboi 31 Mar 2015
A week ago I replaced Neural Katana in my HB glacier deck with Cortex Lock. In my first game using it, I dropped one as the outermost ice on my scoring server. The runner, using Chaos Theory and with only one program out, installed an Akamatsu Mem Chip, then ran my remote with four cards in hand. Boom! Game over on the second turn. I laughed so hard. — NerdimusPrime 6 May 2015
3

No longer can runners say "Mimic, go" vs jinteki, without risking card loss, which is huge. The 2 cost is bananas, and the 4 str is even better. In strict gear check or damage style decks, this is king, replacing katana in almost all instances. Probably not splashed unless its in the new -1 hand size HB. Art is fun and awesome too. Super solid card for what it does. 4/5

(The Valley era)
x3r0h0ur 8719
I'm playing this in my IG deck. If the runner has spare MU it will hurt him. If he has no spare MU I can chuck it in archives unrezzed for +1 trash. — Kitescreech 25 Apr 2015
I can't help thinking this card is crazy over powered. Just the fact that it is a 4 strength sentry that only costs 2 to rez is amazingly good. You usually pay a lot for strength like that. Even rainbow with it big disadvantage costs 3 to get the 4 strength. Then the fact that this ice can easily one shot the runner or at least decimate his hand. True it'll lose its power late game as the runners rig fills up but its usually quite late in the game that the runner will have filled his mu, if ever. It's always been important to get your killer out quickly, but its been a playable risk to make runs with an empty rig. Now its even more important to get that killer quick, a good one that can handle a 4. I think I'll just throw this in random corp decks that aren't damage based for a cheap, high strength ice that could destroy an unwary runner. — quailman2101 7 May 2015
Of course I feel some of the runner cards from O&C are pretty crazy, so I guess that's the natural progression of the game. — quailman2101 7 May 2015
3

They should rename this card Murderer of Anarchs.

Depending on how the game is going I'll try not to rez this unless I'm confident I can pick off a runner. I've rezzed 3 Cortex Locks ever, and every time it has flatlined a boistrous Anarch with no breakers installed.

Thanks to Chrome City, the orange bastards are everywhere these days, and for 2 inf this is not a bad splash as a Surprise! sort of card.

In faction it is tasty. Against most Jinteki IDs runners will run on a minimum of 3/4 cards in hand so they don't fall foul to a nasty Snare! If they have 0/ 1 programs installed at the time it can be game over there and then. No one seems to expect it, and if they do they don't seem to account for it when picking their hand size for running. Even if it doesn't kill them, reducing a runner to 0 cards in hand during a run is basically a good ol' Jinteki invisible ETR. In PE, a good deal of what they could then access would kill them, and it's not much more attractive in RP, IG, and so on. If they go down to 0 or even 1 cards they're going to jack out.

Lockdown is another beautiful card. Pop a Lockdown, then Cortex so they can't trigger I've Had Worse or draw up again before your turn, and you can really put the fear of God in them.

Port Anson Grid: Make them carry on running in to your Data Mine! Force them to access the Snare! or Shock! you know is on top of R&D for some reason! Jackson all of your agendas out of Archives before benevolently letting them take 3 Shi.Kyūs for 0 credits! Basically anything where them having to continue the run is going to kill them or set them back significantly.

You get the idea.

Gets exponentially worse as the game goes on (in most matchups anyway), but a lot of Jinteki ICE is so spiky that it can transition in to a bluff role later on in the game. The uncertainty could buy you then turn you need to score out your winning agenda. Or you could just chuck it in Archives and install something meatier instead.